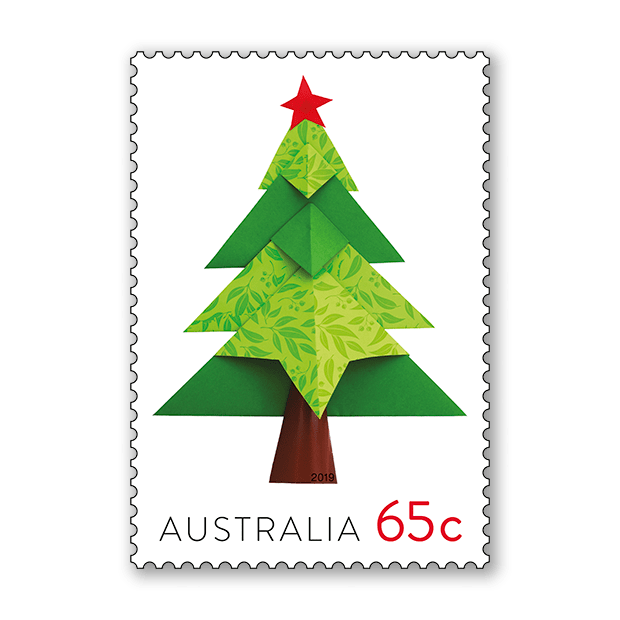 Each year, we release Christmas stamps that celebrate the Christmas holiday, featuring both traditional and secular themes.

This year’s traditional Christmas stamps feature images from a magnificent French illuminated manuscript from the 15th century, one of the treasures of the University of Sydney Library. The two scenes from the Christmas story include the Adoration of the Magi and the Flight into Egypt.

The three secular designs in this issue are in the style of the traditional Japanese art of origami, or paper folding. They reflect more general aspects of Christmas cheer: a Christmas tree, star and gift.

The traditional Christmas stamps were designed by Simone Sakinofsky, and the secular designs are by Sonia Young, both from the Australia Post Design Studio.

This domestic Christmas-card-rate traditional Christmas stamp shows Joseph, Mary and Jesus escaping Herod’s wrath by fleeing to Egypt. Joseph leads the donkey carrying Mary and the swaddled infant Christ, while in the background Herod’s pursuing soldiers encounter a peasant tending a wheat crop. A legend relates how a field of wheat miraculously grew as the Holy Family passed. When questioned by the soldiers, the peasant could truthfully say that the trio went by when his crop was planted. Thinking they must be far ahead, the soldiers then abandoned the chase.

In the international-rate traditional Christmas stamp, we see the first episode of the featured manuscript, which occurred shortly after the birth of Christ, when three wise men from the east followed the guiding star to Bethlehem to pay homage to the newborn Jesus. They kneel and bow before the tiny child seated on his mother’s lap, and offer precious gifts of gold, frankincense and myrrh. When King Herod heard of the birth of Christ he resolved to seek him out and kill him.

This set of stamps contains all five stamps from the Christmas 2019 stamp issue. The Christmas 2019 stamp pack contains all five stamps and the religious minisheet from the stamp issue presented in high quality folder. 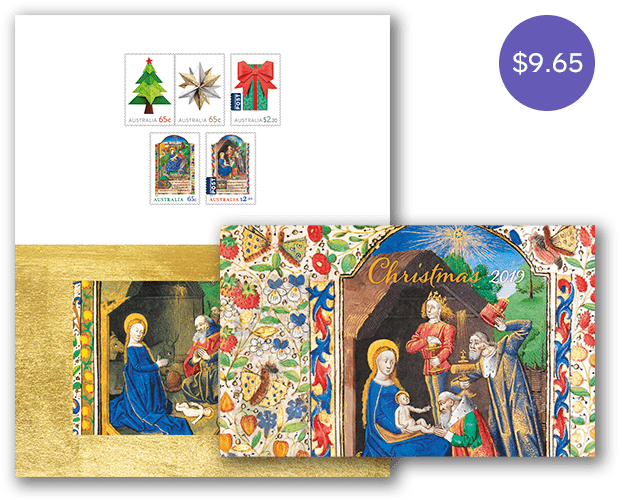 The Christmas 2019 minisheet consists of the two religious stamps from the issue incorporated into a miniature stamp sheet. This maxicard set contains the five maxicards from the Christmas 2019 stamp issue. 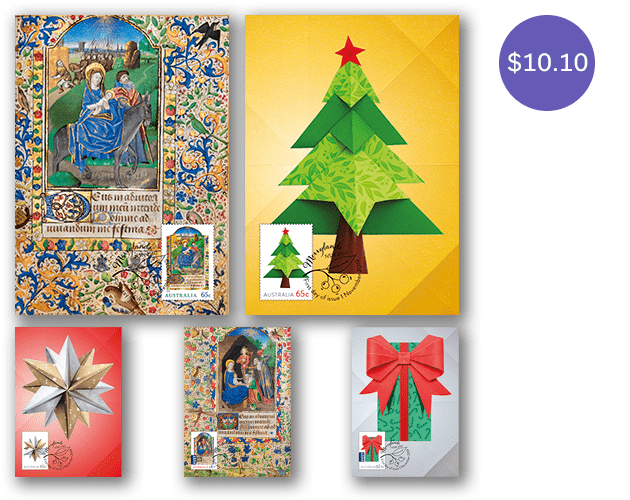