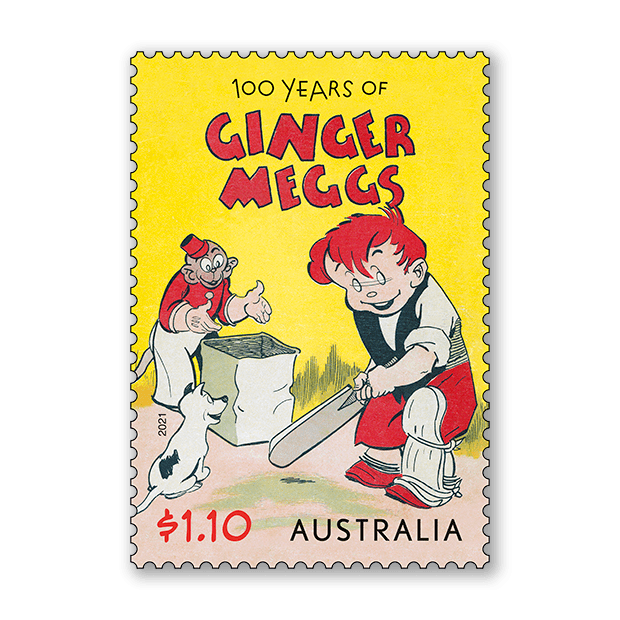 This stamp issue marks the centenary of Ginger Meggs’ arrival on the comic scene in Australia. The star of Australia’s longest running and most widely syndicated comic strip, Ginger Meggs began life in November 1921 as a side character named Ginger Smith in a strip titled “Gladsome Gladys”, first published in Sydney’s Sunday Sun. By April 1922, the character had morphed into the leading man – known as Ginger Meggs – a mischievous, quick-witted, waistcoat-wearing, red-headed suburban kid.

Renamed first “Us Fellers” and then, in 1939, “Ginger Meggs”, the comic strip was originally created by James Charles “Jimmy” Bancks. By the time Bancks died unexpectedly of heart failure in July 1952, he had been committing to paper the life of Ginger Meggs for nearly three decades. Subsequent artists to create “Ginger Meggs” were Ron Vivian (1953–73), Lloyd Piper (1973–83) and James L Kemsley (1983–2007). Since 2007, “Ginger Meggs” has been illustrated by Perth-born, New York–based cartoonist and comedian Jason Chatfield. In his current incarnation, young Ginge, like many kids of the 21st century, has a smartphone and his buddies embody the increasingly diverse nature of modern Australia’s social landscape.

The stamps in this issue showcase the work of three of the five cartoonists who have illustrated this much-loved character. The shift in style, colour and typography across the stamps’ visual elements demonstrate something of the development of “Ginger Meggs” over the century.

This stamp design features the key pictorial element of an early Sunbeams annual cover (series 3, 1926), on which Jimmy Bancks’ depicts a happy Ginger at the makeshift wicket, poised with bat in hand. Tony the monkey plays backstop and Mike the dog is an eager fielder.

In this stamp design, the work of James Kemsley is featured through the cover art of the kids’ book Wake Up Ginger Meggs, published by HarperCollins in 1989 and detailing the adventures of Ginger and his buddies Bennie and Chubb.

This set of stamps contains all three stamps from the 100 Years of Ginger Meggs stamp issue. 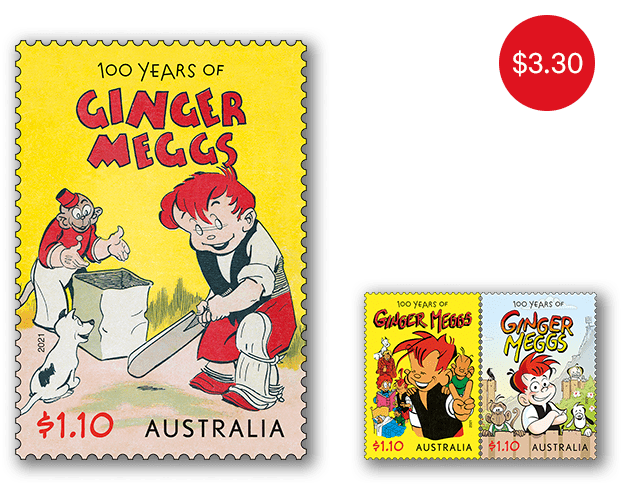 The 100 Years of Ginger Meggs stamp pack contains all three stamps and minisheet from the stamp issue presented in high quality folder. The 100 Years of Ginger Meggs minisheet consists of the three stamps from the issue incorporated into a miniature stamp sheet. 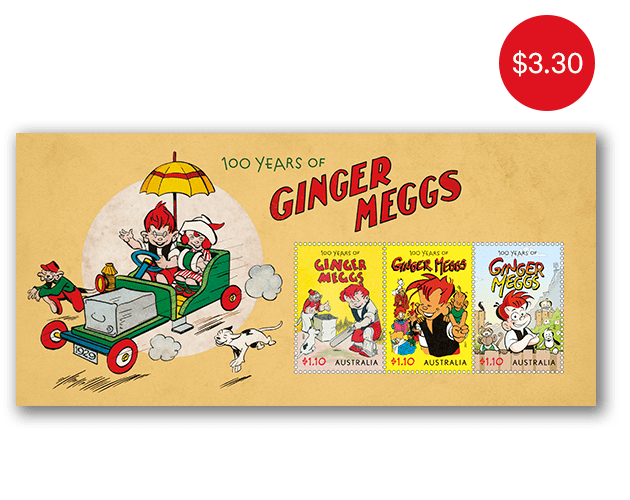 This maxicard set contains the three maxicards from the 100 Years of Ginger Meggs stamp issue. 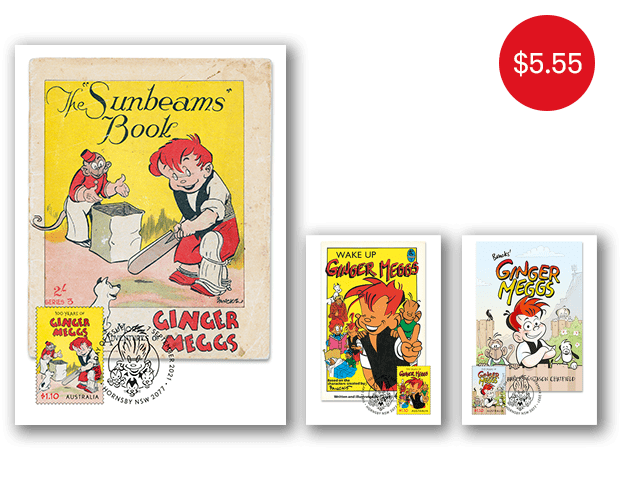