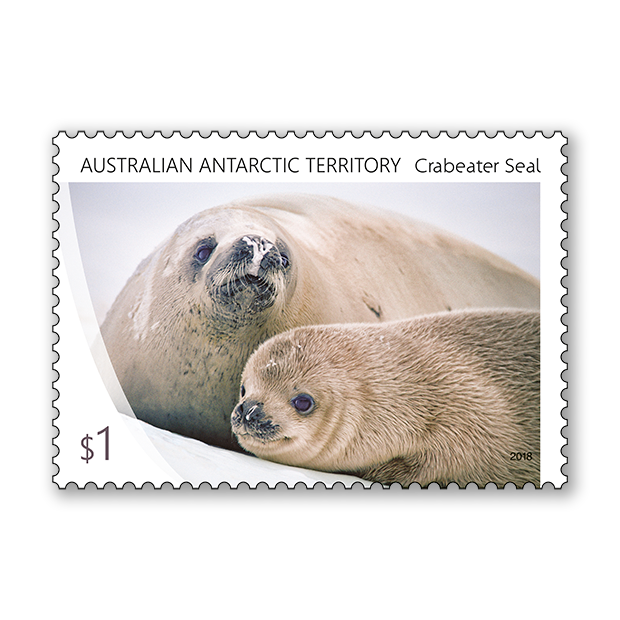 This stamp issue focuses on the Crabeater Seal (Lobodon carcinophaga). The Crabeater Seal is thought to be the most numerous of all seal species, with its population numbering in the millions. It has a circumpolar distribution and is largely restricted to the pack-ice zone, which fluctuates in area as the pack-ice expands and contracts around Antarctica with the seasons. The remoteness and inaccessibility of its preferred pack-ice habitat make it difficult to determine numbers accurately. While it has been observed congregating in large groups, the Crabeater is more commonly observed in groups of around three or as a solitary animal, partly the result of it occupying floating pack-ice, which can break into smaller floes.

Despite its name, the Crabeater feeds mainly on krill. Its close-fitting, multi-cusped teeth are thought to have evolved precisely for sieving the krill, much like baleen whales have developed specialised feeding apparatus for straining krill.

The four stamps, designed by Sonia Young of the Australia Post Design Studio, indicate some of the defining physical and behavioural attributes of the Crabeater Seal.

The female Crabeater will give birth to a single pup around September–October, after a gestation period of nine months. She feeds it for up to three weeks, during which she stays with it on the ice floe. Once the pup is weaned, adults soon mate again, with the season lasting until late December. During breeding season, the family stays in proximity, though the male plays no part in raising the pup and he decamps soon after copulation to find another mate. Mortality in pups is high during the first 12 months of life, the International Union for the Conservation of Nature suggesting as high as 80 per cent and most likely due to Leopard Seal predation. The large scars that often mark the body of the Crabeater have been likely inflicted on young seals, shortly after they have been weaned, by the Leopard Seal.

The Crabeater can dive to around 600 metres and for periods of around 25 minutes, but its dives are thought to be generally much shallower and shorter, and tied to the diurnal activity of its main food source, krill.

The Crabeater has a fine, dog-like face and a relatively slim, lithe body, with adults reaching 2–2.5 metres. Both sexes reach about the same size in adulthood. It is coloured a silvery grey after moulting, which occurs in January–February, with a more chocolate-coloured back; it becomes a more uniform cream or pale gold as the fur ages. It may have chocolate or dark flecks on its shoulders, flanks or sides, and its head and its flippers are also darker than its predominant colour. Newborn pups have pale coffee, white or grey-brown soft, woolly fur.

While the Crabeater Seal can be quite agile on ice, it is unable to walk on its hind flippers, so it is clumsy on land. It ambulates by using its body muscles, though its fore flippers do offer support and help pull it through snow.