Anzac Day, held annually on 25 April, marks the anniversary of the first major military action fought by Australian and New Zealand forces during the First World War – the landing at Gallipoli and the attempted capture of Constantinople (now Istanbul, Turkey). The campaign took eight months and cost more than 8,100 Australian lives. Although a failure in military terms, it is said that the mateship, courage and endurance shown by the Anzacs helped to shape Australia’s emerging national identity.

This stamp issue features oil on canvas paintings that were inspired by the events of the two World Wars on the home front and in combat overseas. William Dargie and Stella Bowen were both employed as Australian official war artists during World War II. Grace Cossington Smith and Hilda Rix Nicholas painted subjects that had personal significance.

Young Sydney artist Grace Cossington Smith (1892–1984) painted the now-celebrated modernist work The sock knitter in 1915 during World War I. It represents the artist’s sister knitting socks for soldiers at the front.

A man by Hilda Rix Nicholas (1884–1961), painted in Sydney shortly after the Great War, depicts an unnamed heroic Australia soldier. It poignantly recalls the artist’s tragic loss of her husband, killed in action in France only five weeks after their marriage in 1916.

Dargie’s (1912–2003) Group of VADs, painted in 1942, is a portrait of four civilian nurses in the Voluntary Aid Detachment at 115 Australian General Hospital (later the Repatriation Hospital) in Heidelberg, Melbourne, where they assisted in the care of convalescing military personnel.

Stella Bowen’s (1893–1947) Bomber crew is a moving tribute to six Australians and one Englishman comprising a Lancaster bomber crew of No. 460 Squadron Royal Australian Air Force. On 28 April 1944, the night after Bowen completed the initial sketches for the painting, the airmen were reported missing over Germany. Only Pilot Officer Thomas Lynch (back row, second from left) survived.

This set of stamps contains all four stamps from the Anzac Day 2020 stamp issue. 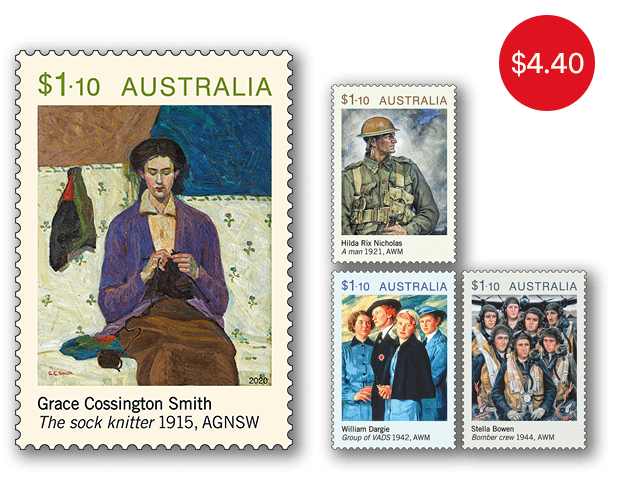 The Anzac Day 2020 stamp pack contains all four stamps and minisheet from the stamp issue presented in high quality folder. The Anzac Day 2020 minisheet consists of the four stamps from the issue incorporated into a miniature stamp sheet. 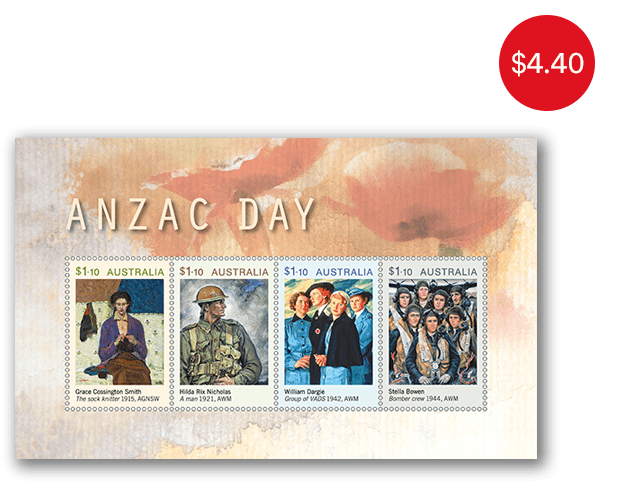 This maxicard set contains the four maxicards from the Anzac Day 2020 stamp issue. 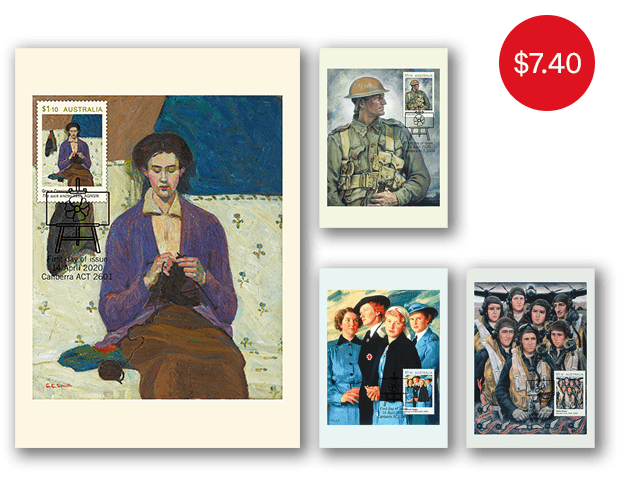