There are currently more than 140 botanical gardens and arboreta (specialising in trees) in all states and territories of Australia. It has been estimated that 5.6 million people, or 44 per cent of Australian adults, visit a botanic garden at least once every year.

The Australian National Botanic Gardens occupy around 90 hectares on Black Mountain, Canberra. The gardens were planned in the 1930s at a location in Canberra and in September 1949 the first trees were ceremonially planted. After development of the site, facilities and the living collection, the gardens were opened to the public in 1967; and in October 1970, they were officially opened by Prime Minister John Gorton. Today, the gardens contain the world’s largest living collection of Australian native flora. Its extensive collection includes around 75,000 plants from more than 6,000 species.

The two plants featured on the stamps in this issue are representative of the native flora grown in the Australian National Botanic Gardens.

Silver Banksia (Banksia marginate) was the inspiration behind the logo of the Australian National Botanic Gardens. It is one of the approximately 170 species of the plant genus Banksia and is found throughout much of south-eastern Australia, including the Canberra region. It varies widely in habit, ranging from a 20-centimetre shrub to a 12-metre tree. Yellow flower spikes occur from late summer to early winter. The flower spikes fade to brown and then grey and develop woody follicles bearing the winged seeds. Many bird species, particularly honeyeaters, forage at the flower spikes, as do native and European honeybees.

Also known as Wee Jasper Grevillea, this species is one of Australia’s rarest plants. There are only about 100 plants left its natural habitat, at six sites around the Lake Burrinjuck and Wee Jasper areas in the Yass Valley of New South Wales. It is endangered because of the heavy grazing of sheep and goats and most of the remaining plants are to be found in rocky areas inaccessible to grazing. The shrub has an average height of 1.2 to 1.5 metres and the 2- to 3-centimetre-long flowers are cream to green, with a pink to red style. The plant flowers from May to November and attracts native nectar-feeding birds.

The stamp photograph is by Murray Fagg. 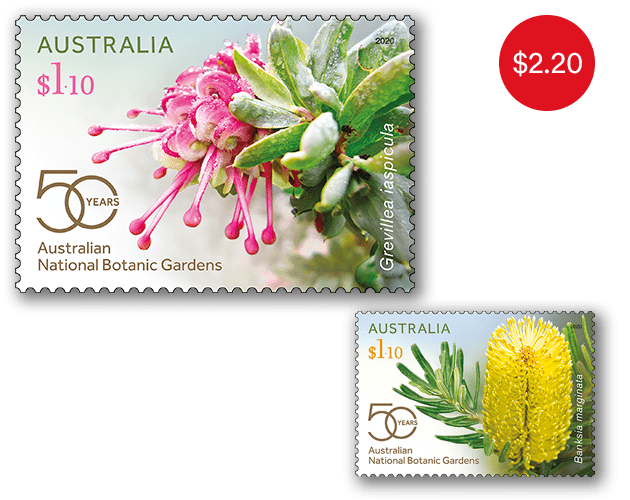 The Australian National Botanic Gardens: 50 Years minisheet consists of the two stamps from the issue incorporated into a miniature stamp sheet.