Volcanoes form where molten rock (magma), typically produced in the Earth’s mantle, rises to the surface. Although there are no active volcanoes on the Australian continent, over the last 40 million years much of eastern Australia has been subject to episodic volcanic activity, the most recent being around 5,000 years ago at Mount Gambier, South Australia.

This issue features three extinct volcanoes on the Australian mainland and one now comprising an offshore island.

Learn more in our blog article, including an interview with volcanologist Honorary Associate Professor Heather Handley.

Table Cape, near Wynyard in north-western Tasmania, lies in the traditional lands of the Tommeginer people. Rising dramatically 170 metres from the sea, this basalt landform is a remnant plug of an extinct volcano that last erupted around 12 million years ago. The flattened top was formed from a hardened lake of lava. The stamp photograph is by Dale Triffett.

Wollumbin Mount Warning, in the Tweed River Valley of New South Wales, is the remnant plug of the central vent of a huge shield volcano that last erupted some 23 million years ago. The caldera or large volcanic crater surrounding Wollumbin Mount Warning is one of the best examples in the world of an erosion caldera. The mountain is a significant sacred site for the Bundjalung people. The stamp photograph is by Nick Rains/Australian Geographic.

Mount Elephant, or Djerrinallum in the Wathaurong language, lies near the town of Derrinallum. It is a steep-sided, small volcano, one of the many scoria cones in the Western District. A breached crater, it rises 240 metres above the surrounding plain. The stamp photograph is by Don Fuchs/Australian Geographic.

Lord Howe Island, which lies in the Tasman Sea east of Port Macquarie in New South Wales, is the remnant of an extinct shield volcano that last erupted about seven million years ago. Originally 30 kilometres in diameter, the crescent-shaped island is now much reduced to just 14.55 square kilometres and dominated by two basalt peaks, the remains of lava flows that once filled a large volcanic caldera. The world’s largest volcanic stack, Ball’s Pyramid, which lies 20 kilometres south-east of the island, is a remnant of a vent of the same volcano. The stamp photograph is by Jon Cornforth Images.

This set of stamps contains all four stamps from the Australia’s Volcanic Past stamp issue. 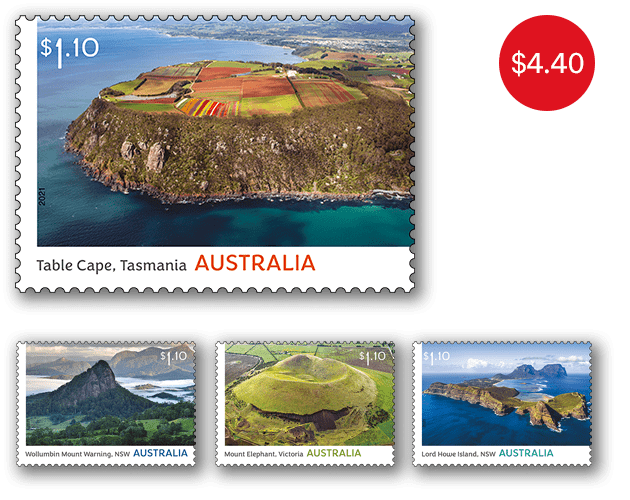 The Australia’s Volcanic Past stamp pack contains all four stamps from the stamp issue presented in high quality folder. This booklet contains 20 x $1.10 self-adhesive stamps from the Australia’s Volcanic Past stamp issue in a convenient wallet sized booklet. Set of Australia’s Volcanic Past Maxicards

This maxicard set contains the four maxicards from the Australia’s Volcanic Past stamp issue. 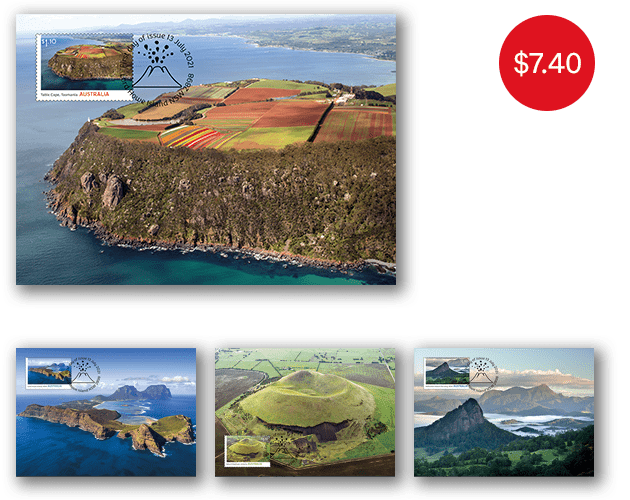