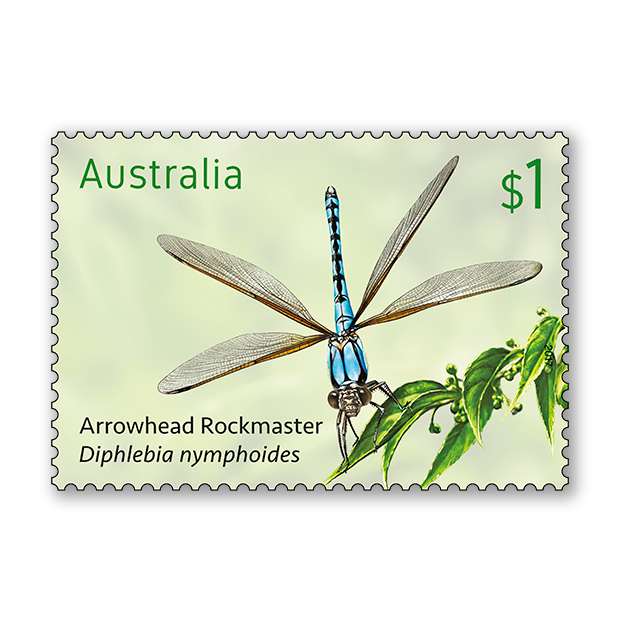 Dragonflies (Order Odonata) are among the most beautiful and captivating creatures of the insect world. Faster than most other flying insects, they hover weightless mid-air before darting at speed, which in the case of some species can be up to 70 kilometres per hour.

Dragonflies are carnivorous flying insects that mainly inhabit areas near still and/or running freshwater sources, their presence signalling the health of the local ecosystem. Depending on the species, adults will have a lifespan of between a few weeks and a year.

The dragonfly is an ancient group of fauna that predates dinosaurs. The original dragonflies were among the first winged insects to develop, with fossilised specimens from the Carboniferous period indicating they could possess a wingspan of up to 75 centimetres. Across geological eras, this amazing adaptor has been successful in part because of its well-developed eyes and capacity for flight. Today’s much smaller dragonfly belongs to an order that has taxonomically diversified into around 6,000 known species worldwide. Australia has five giant species (petalurids), this group having been around for about 190 million years and probably being the oldest extant family.

The dragonfly is historically significant to Australia. It was our first faunal species described, after a specimen was collected by Joseph Banks at Endeavour River, when Cook’s ship was grounded in Queensland for repairs in 1770.

Although this stamp issue is titled Dragonflies, it represents two suborders of Odonata. The Arrowhead Rockmaster is the sole damselfly represented; the issue also includes one giant dragonfly, the Beautiful Petaltail. This selection of Australian dragonfly species is based on their visual and taxonomic diversity – each belonging to a different genus, spanning four families. The stamp designs show male dragonflies, which are often more spectacular in colouration than females.

The bright and lifelike stamp illustrations are by Owen Bell. Australia has five species of Percher. They belong to the genus Diplacodes, which ranges through Africa and Asia into the western Pacific.

The species that occur in Australia are tiny to medium in size, with the Scarlet Percher (Diplacodes haematodes) reaching a length of 3.5 centimetres and having a wingspan of six centimetres. Both the fore and hindwings of the Scarlet Percher face forward when it is at rest. As well as the head, thorax and abdomen of the male being coloured red, so too is part of his wing venation. In contrast, the female is ochre coloured, with dark venation in her wings that tends to a smoky area towards wing tips.

This small dragonfly inhabits creeks, rivers and still waters right across mainland Australia, preferring open sunny sites to shady areas. Unlike most other dragonfly species, it will perch on rocks. The Scarlet Percher also has an extra-limital distribution in Timor, New Guinea, Vanuatu and New Caledonia. Similar to the aptly named Sapphire Rockmaster, the Arrowhead Rockmaster (Diphlebia nymphoides) is a beautiful mid-blue colour. Its thorax is almost entirely blue, broken only by four fine, vertical black lines, while its abdominal sections are blue and black.

Diphlebia belongs to the suborder Zygoptera, making it a damselfly rather than a dragonfly proper. Unlike dragonflies, both pairs of the damselfly’s wings are the same size and shape. While most damselfly species fold their wings neatly along their narrow body when at rest, the Rockmasters hold theirs more conspicuously above their bodies. The wings of the Arrowhead Rockmaster are coloured charcoal, which deepens in colour towards their tips. Adults grow to around five centimetres in length. The Australian Tiger (Ictinogomphus australis) is a striking dragonfly, its common name coming from its appearance. A complex yellow-green patterning covers its head and thorax, changing to more open yellow stripes through its abdominal sections. The abdomen of the male has a clubbed end, with two flaps at its point. This large species grows to around seven centimetres in length and has a wingspan of up to 10 centimetres.

The Australian Tiger occurs in aquatic and coastal environments right across northern Australia and down the east coast through Queensland and New South Wales. The aquatic larvae will make shallow burrows into the mud. 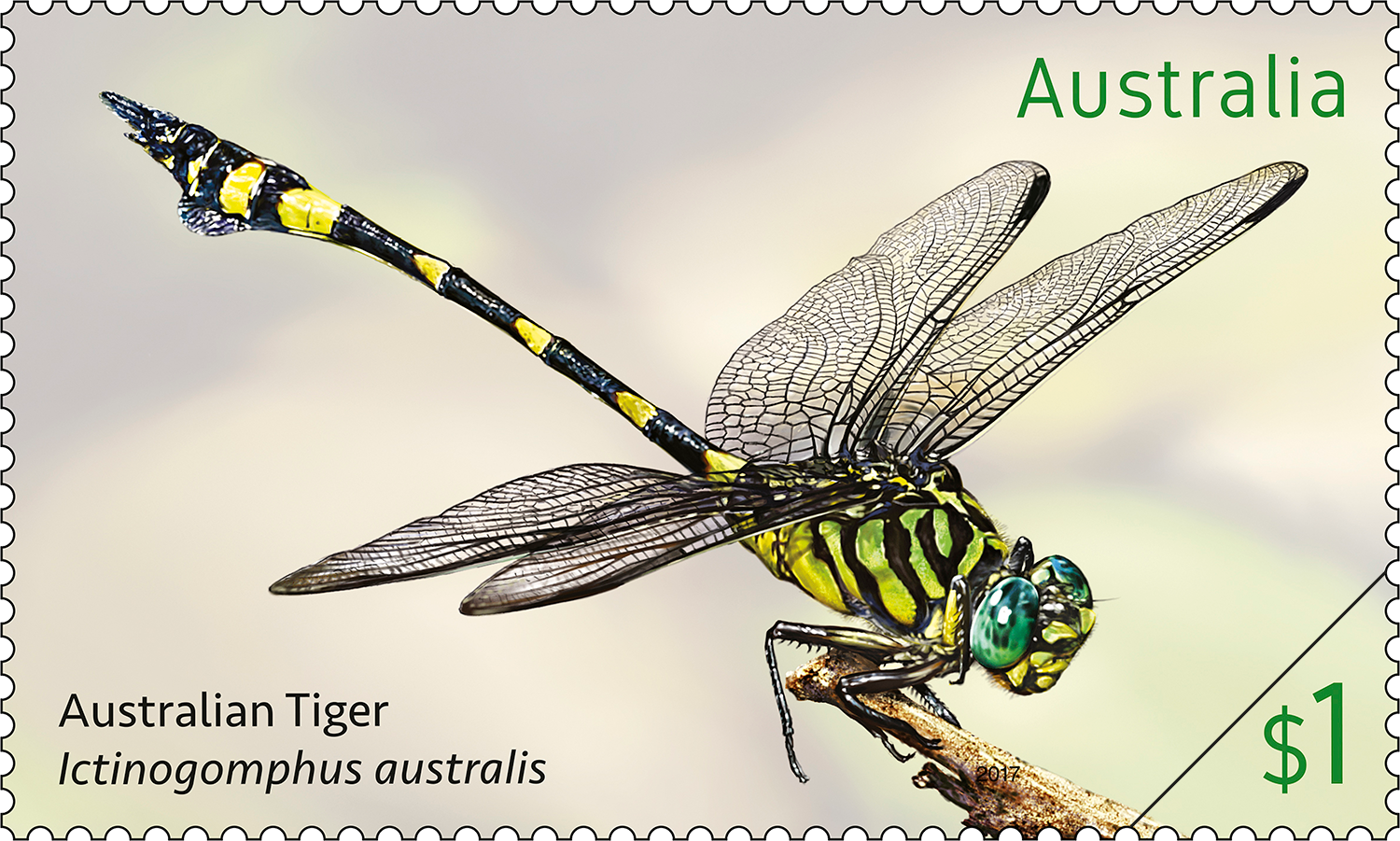 The Jewel Flutterer (Rhyothemis resplendens) is, as its name suggests, a brilliant jewel-like species. Its two pairs of proportionately large wings are coloured with panels of spectacular metallic blue, with areas of deeper blue at the back edge; the wrinkled metallic surface scatters the light, enhancing the species’ visibility. The body of this small dragonfly is only around 2.5 centimetres in length; its wingspan is four to six centimetres.

It can be found near rivers, creeks and still waters in Queensland, from Cape York Peninsula south to around Mackay. This species also occurs in New Guinea, the Moluccas and Bismark Archipelago.

The Beautiful Petaltail is one of five Giant Dragonfly species that are endemic to Australia, the Giant Petaltail (Petalura ingentissima) being the largest of Petaluridae species worldwide. Four of these species occur in eastern Australia and one in the south-west of Western Australia. The Petaltail group takes its common name from the large, leaf-like appendages at the end of the male’s abdomen.

Adults of the very large Beautiful Petaltail (Petalura pulcherrima) reach nine to 11 centimetres in length, with a wingspan of 11 to 14 centimetres. Its body is dark brown to black with yellow bars, each of which has a brown line through it, giving the body a bamboo-like appearance. It has two yellow spots behind its eyes and large glassy wings.

Petalura larvae are semi-aquatic and are known as “pit dwellers” for their behaviour of building burrows into the mud. They feed nocturnally, mainly on the larvae of other insects and dragonfly species, but they have also been known to feed on some terrestrial invertebrates, such as spiders, that are near their swampy habitat.

This species occurs only in coastal north-eastern Queensland, occupying areas near rainforest streams. It is classified “endangered” on the IUCN Red List, with human incursions into its territory, such as timber harvesting and urban development, reducing and fragmenting its habitat.