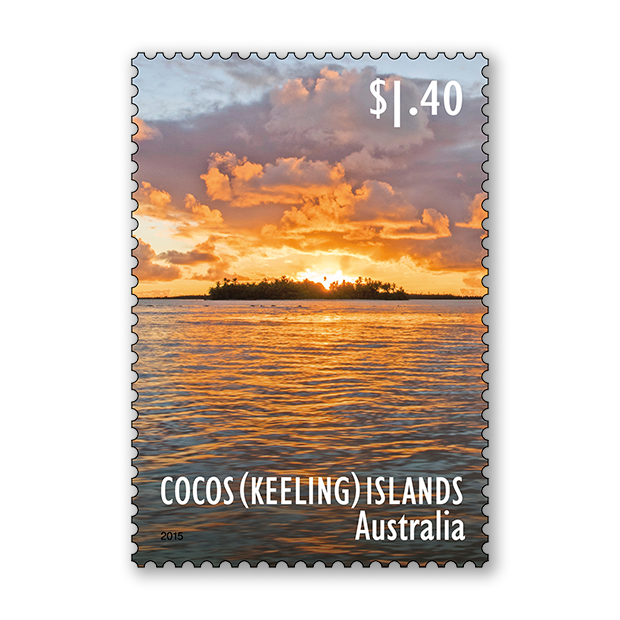 Situated in the Indian Ocean some 2,700 kilometres north-west of Perth, the Cocos (Keeling) Islands is a group of 27 islands in two atolls, with a latitude of 12° 10’ and longitude of 96° 50’. They have a total land area of about 14 square kilometres and a highest elevation of just five metres. The two coral atolls have developed on the peaks of two volcanic seamounts in an underwater range rising from about 5,000 metres and extending north-east beyond Christmas Island, about 900 kilometres away. The chain of seamounts exemplify the sequence of events that result in atoll formation; consequently, they were the only coral atolls that Charles Darwin visited in 1836 when he developed his theory on the subject of atoll formation.

North Keeling Island forms the single-island, horseshoe-shaped northern atoll, while the other 26 islands comprise the southern atoll. These tropical isles are largely covered with coconut palms and vegetation, and ringed with white coral-sand beaches. North Keeling Island is the Pulu Keeling National Park, Australia’s smallest national park at 1.2 square kilometres of land and a 1.5 kilometre fringe of marine environment. It is about 24 kilometres north of the main group, and its remoteness makes it an effective place for wildlife.

The two islands with permanent populations are Home and West Islands, in the southern atoll. Home Island is mainly occupied by Cocos Malay, descendants of the workers brought there from Malaysia during the 19th century. It has a population of around 500 and is home to the largest settlement of Cocos (Keeling), Bantam. With a population of around 120, the larger West Island is the “capital island” and home mainly to Anglo residents. Government buildings, a general store, holiday accommodation and the airport are based here. Some Cocos Malays have weekend shacks (pondoks) on some of the other larger islands.

Designer Lisa Christensen has brought visual interest and variation to the designs by making the sky and horizon line significant visual components. The horizon operates not only a design element drawing the four stamps together, but it reflects the dominance of the horizon when voyaging across the open ocean. The stamps feature photographs taken by Cocos (Keeling) resident and photographer Karen Willshaw.