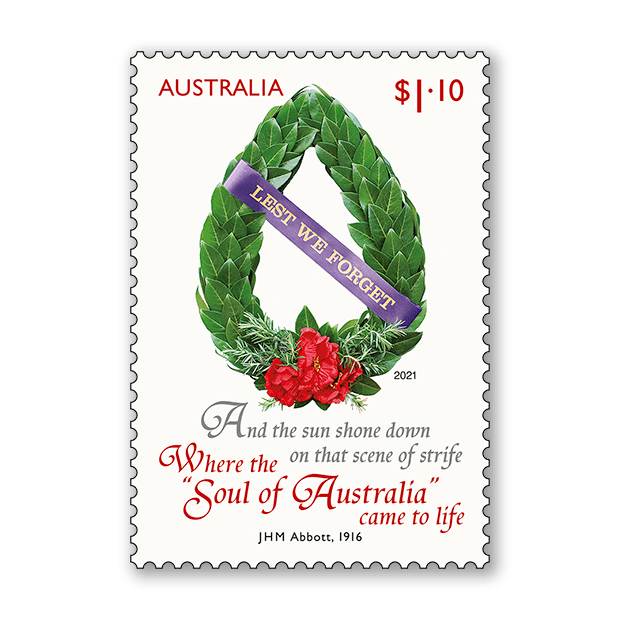 Wreath-laying and poetry reading are important components of national Anzac Day commemorations, which are held annually at services across the country on 25 April. The laying of wreaths has long been an Australian Anzac Day tradition, at least since the late 1920s, when the day became a nationally observed event. Poetry about the efforts of the Anzacs during World War I is often infused with a sense of pride in the Anzac spirit – the courage, bravery and comradery displayed by the Anzacs during the failed Gallipoli campaign of 1915. Such verses typically also convey the impact that this event had on a newly federated nation’s emerging identity.

The stamps in this issue feature commemorative wreaths, together with excerpts from early examples of Anzac-inspired poetry.

This stamp presents an Anzac Day wreath formed from laurel (bay) leaves, laurel being used in Roman times to crown victors and the brave. Traditionally, laurel wreaths are tear-shaped, to symbolise tears shed for the fallen. There are often three poppies at the base, to represent the Australian Army, Navy and Air Force, as well as sprigs of rosemary, another evocative symbol of remembrance – its strong smell is said to aid the memory. A purple ribbon is usually draped across, purple being a symbol of mourning.

The stamp also features an excerpt from “The Soul of Australia”, which was composed by writer and journalist JHM Abbott (1874–1953), also a serving officer in the Boer War (1899–1902). Published in The Brisbane Courier on Anzac Day 1916, the poem has also been set to music and was performed by Gallipoli Choir at Anzac Day services in Gallipoli, in 2013.

The stamp photograph is by Xavier Ho.

While single poppies aren’t usually a feature of Anzac Day, poppy wreaths are placed at memorials. In 1934, Prince Henry, the Duke of Gloucester, planted a pine tree in the grounds of the Australian War Memorial, which was still under construction. Nearby, he placed a poppy wreath, which is featured on this stamp.

The stamp also presents an excerpt from the poem “We’re All Australians Now”, which was written in 1915 as an open letter to the troops at the Dardanelles, by bush balladeer, author and war correspondent AB “Banjo” Paterson (1864–1941). The 14-verse poem is infused with a strong sense of patriotism and gratitude.

The stamp photograph is from the collections of the Australian War Memorial.

Set of Lest We Forget Gummed Stamps

This set of stamps contains the two $1.10 stamps from the Lest We Forget stamp issue. 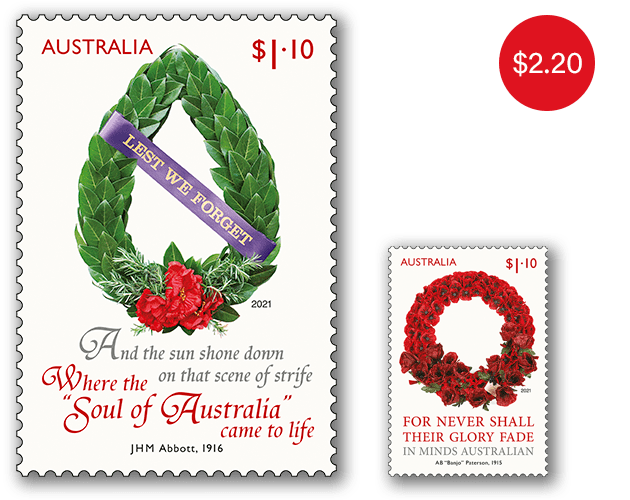 Lest We Forget Stamp Pack

The Lest We Forget stamp pack contains the two stamps and minisheet from the stamp issue presented in high quality folder. 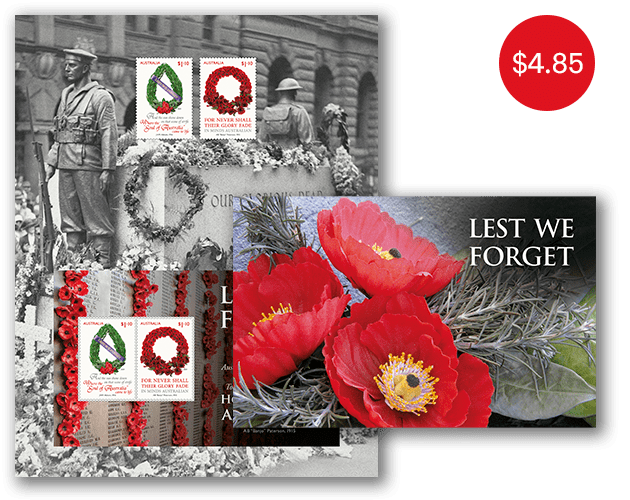 Lest We Forget Minisheet

The Lest We Forget minisheet consists of the two stamps from the issue incorporated into a miniature stamp sheet. 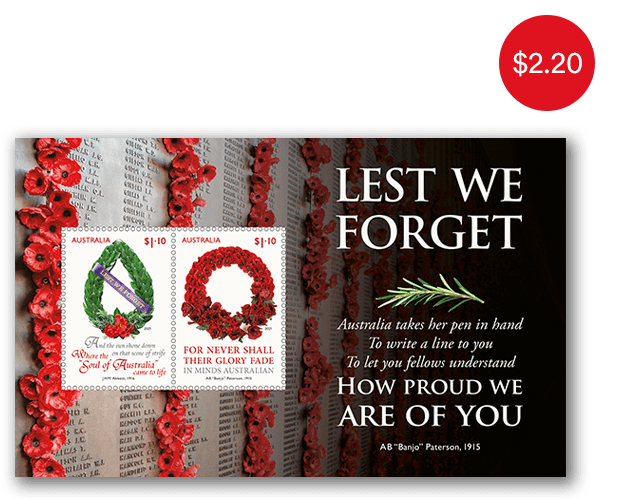 Set of Lest We Forget Maxicards

This maxicard set contains the two maxicards from the Lest We Forget stamp issue. 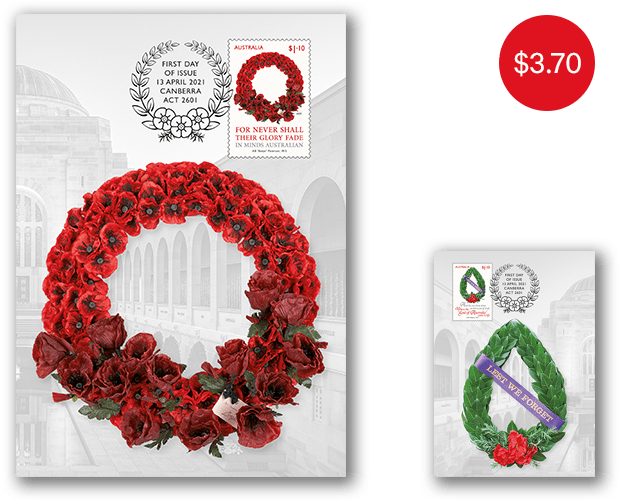