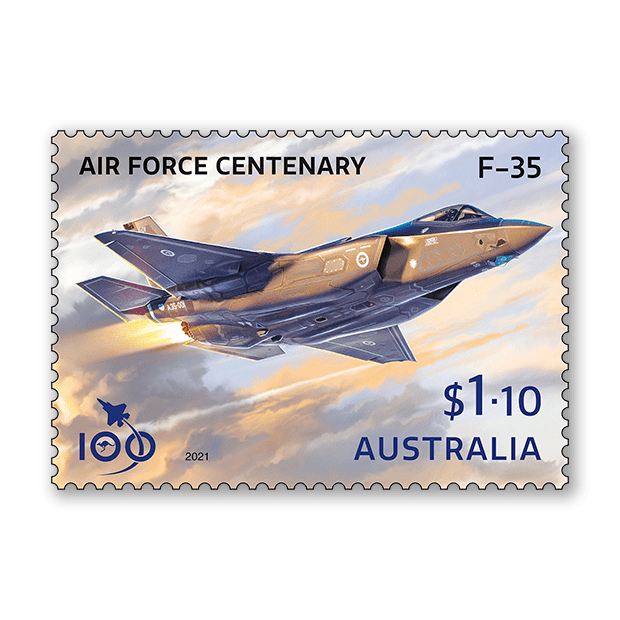 On 31 March 2021, the Royal Australian Air Force (RAAF) commemorates a century of service to Australia. The RAAF traces its history back to the Australian Flying Corps (AFC), which was established in September 1912 and commenced flying operations at Point Cook on 1 March 1914.

The AFC was part of the Australian Imperial Force (AIF) during World War I until both were disbanded in 1919 following the war. The Australian Air Force was formed in March 1921 and prefix “Royal”, approved by King George V three months later, became effective on 13 August 1921. The RAAF was the second Royal air arm to be formed in the British Commonwealth and by end of World War II was the fourth largest air force in the world. Since World War II, the RAAF has evolved through technology and expertise to become a highly effective fifth-generation air force operating in defence of Australia and our national interests.

The stamps in this commemorative issue present early and modern RAAF aircraft: a 1921-era SE5A bi-plane and a F-35A Lightning II, the RAAF’s newest air combat aircraft. The scene on the minisheet depicts the original RAAF Base at Point Cook, Victoria. Richard Williams, the first pilot to be trained at Point Cook and the first chief of the RAAF, stands alongside the SE5A bi-plane.

The F-35A Lightning II was first accepted into Australian service in 2018. This highly advanced, multi-role, supersonic stealth fighter has a low-profile design, internal weapons and fuel carriage, advanced radar, electro-optical and infrared sensors, advanced voice and data link communications, and the ability to employ a wide range of air-to-surface and air-to-air weapons.

The Royal Aircraft Factory SE5 was an important British bi-plane fighter aircraft of World War I. Around 70 were produced, until the improved SE5A model took over. Thirty-five SE5A bi-planes arrived in Australia in 1920 as part of an Imperial Gift by Britain for the RAAF, which was soon to be formed. The SE5A fighters given to Australia in 1920 were khaki, but were repainted silver with red, white and blue rudder stripes by the RAAF. The Royal Australian Air Force Centenary minisheet consists of the two stamps from the issue incorporated into a miniature stamp sheet.