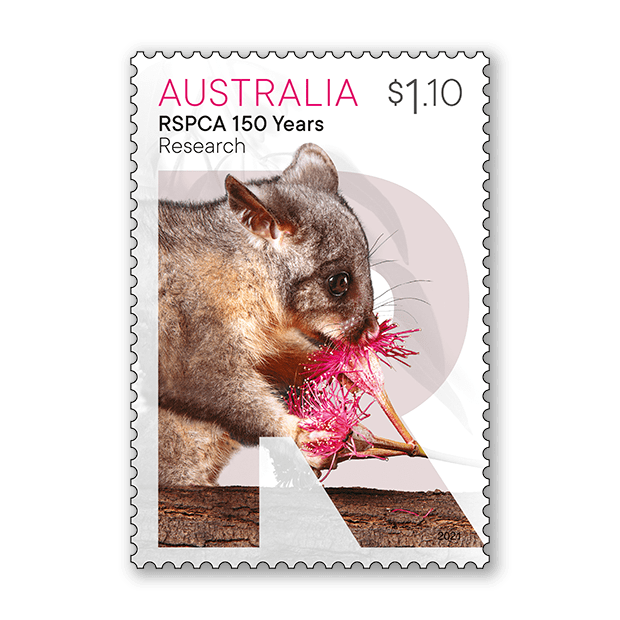 Australia’s first Society for the Prevention of Cruelty to Animals was formed following a public meeting, on 4 July 1871, at the Mechanics’ Institute, Melbourne, to discuss the ill treatment of working horses in Victoria and the need for a society to prevent animal cruelty.

Following its establishment in Victoria, other Australian colonies quickly followed suit with their own societies, with the Australian Capital Territory (ACT) and Northern Territory forming theirs in the mid-20th century. A royal warrant was received in 1923, when the various societies became known as the Royal Societies for the Prevention of Cruelty to Animals (RSPCA).

In 1980, it was agreed that the RSPCA had to become a national organisation, to speak with one voice on policy matters and to offer advice to the federal government on national animal welfare issues. The new organisation was named RSPCA Australia.

While the national organisation was technically formed in 1980, this stamp issue commemorates the founding of the movement for the prevention of cruelty to animals, recognising 150 years of caring for and protecting animals in Australia. The stamps represent five key aspects of the RSPCA’s mission and practice: research, shelter, protection, certification and advocacy. Together, the five stamp designs indicate the breadth of the RSPCA’s work across the domains of companion animals, livestock, animals in sport, recreation and industry, and wildlife.

A science-based approach to animal welfare and human impact on our non-human companions underpins the work of the RSPCA. Research ranges over wildlife conservation; sporting, entertainment and agri-business practices; and use of animals in scientific experiments and product testing. The RSPCA’s quarterly publication Science Update is a forum for sharing such research, as is its online Knowledgebase.

Every year, unwanted and neglected pets enter the care of the RSPCA’s state- and territory-based member societies, as do injured wild animals. Some animals are reclaimed and, sadly, some euthanised, although a great number are also sheltered and rehabilitated before being rehomed with new carers through fostering and adoption programs. While neglect numbers are thankfully trending downwards, an essential part of this care work is to educate individuals on responsible pet ownership and to promote the principles of good pet care, fundamental strategies that support this downward trend.

Perhaps the most high-profile aspect of the RSPCA’s mission is protection of animals through the inspectorate arm of each member society, which enforces state and territory legislation against animal cruelty. Depending on the state or territory, inspectors have the power to enter property to investigate claims of cruelty (physical and psychological violence, neglect and lack of welfare), to seize evidence of cruelty, including the animals, to issue directions/notices and on-the-spot fines, and to initiate prosecutions against perpetrators of cruelty. The majority of cases are addressed through less punitive measures, with education and advice being the preferred tools for resolving allegations and fostering a culture of responsible animal ownership.

The Approved Farming Scheme was established by the RSPCA in 1996, as a form of independent accreditation providing for high standards of animal welfare in farming, informed by evidence-based science. Working closely with farmers, the RSPCA ensures that animals raised for human consumption are provided with environments that meet their species-specific needs and encourage them to express natural behaviours within a viable commercial context. Turkeys, hens, pigs, calves and salmon are among the animals that benefit from this scheme, and around 2.5 billion animals have lived better lives since it was introduced.

Advocacy is a significant part of the RSPCA’s work, particularly with stakeholders in government and certain industries, to establish and evolve guidelines, policies and legislation that benefit animals. Campaigns that raise public awareness of animal welfare issues are thus an important aspect of work that leads to compliance and change. For example, the campaigns against excessive use of whips in horse racing and the post-retirement treatment of racehorses and greyhounds have led to more regulated sectors and to good outcomes for individual animals.

This set of stamps contains all four stamps from the RSPCA: 150 Years stamp issue. 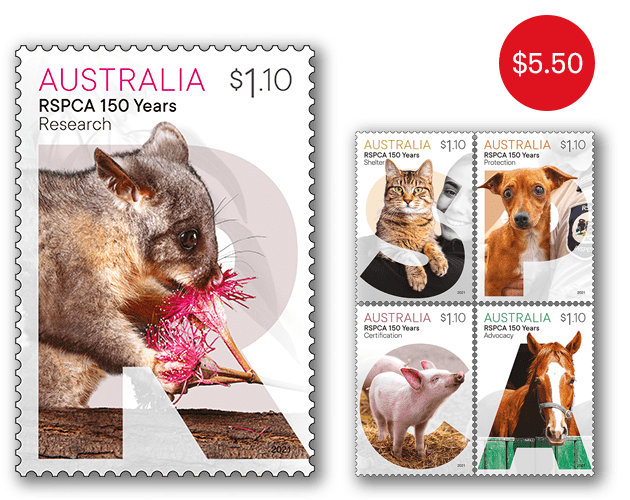 The RSPCA: 150 Years stamp pack contains all five stamps and minisheet from the stamp issue presented in high quality folder. 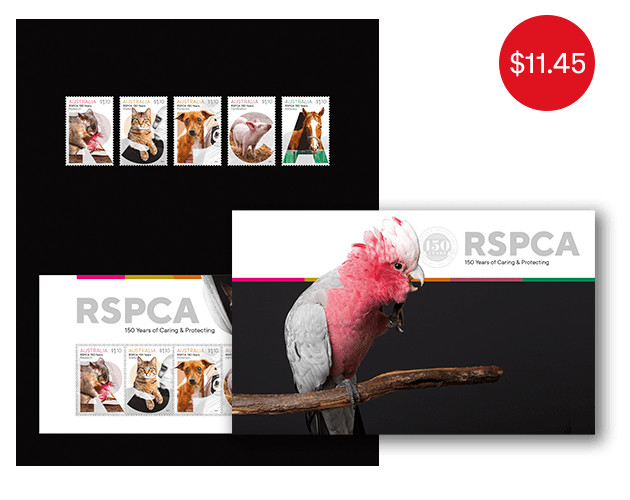 The RSPCA: 150 Years minisheet consists of the five stamps from the issue incorporated into a miniature stamp sheet. 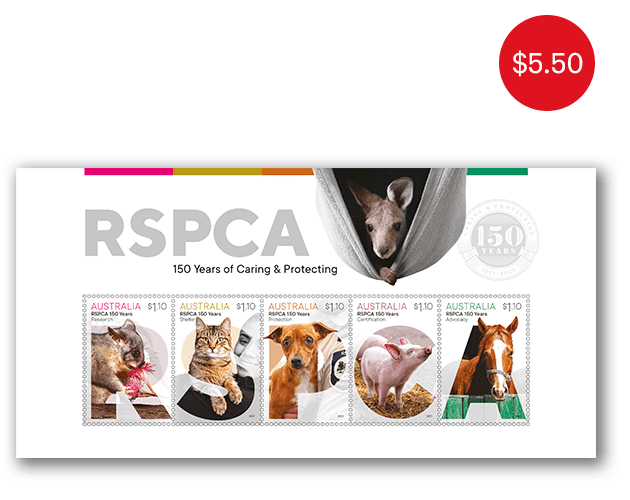 This maxicard set contains the five maxicards from the RSPCA: 150 Years stamp issue. 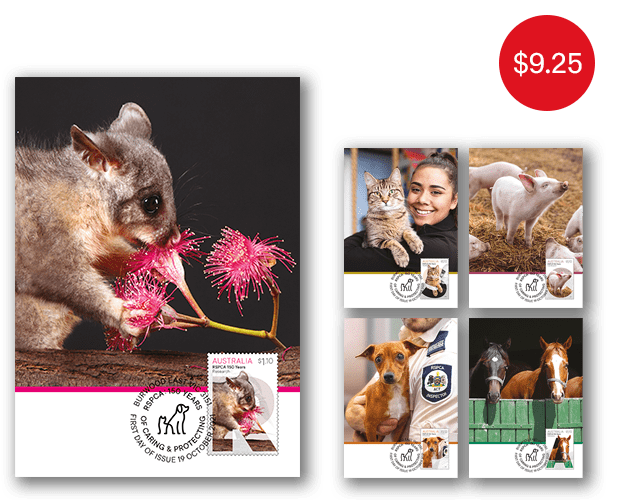