Seed banking is an essential insurance policy against species extinction and a source of quality seed for aiding species recovery and restoration of depleted plant communities and habitats, as well as for scientific research.

Australia’s several state and territory seed banks collaborate as part of the Australian Seed Bank Partnership . They have conserved seed of more than half of Australia’s native flora species, including nearly 50 per cent of those recognised as at risk under state, territory and commonwealth threatened species legislation. As well as collecting and storing seeds, the seed banks undertake important research.

The stamps feature the seeds of three native species, which together represent regional, type and habitat diversity.

The stamp designs are by Sonia Young of the Australia Post Design Studio. The background element and the typographic style used in the stamps suggest banknote design, helping to visually communicate the concepts of “value”, “currency” and “banking”.

This rare, highly localised perennial grass is found in the wetter parts of South Australia’s Mt Lofty region and mainly the Adelaide Hills area. The grass seed is purple with three distinct rows of hairs and a twisted, coppery bristle.

The seed photograph in this stamp design is courtesy of the South Australian Seed Conservation Centre, Botanic Gardens and State Herbarium – Government of South Australia.

The common name of this near-threatened alpine shrub is Snow Health, which is apt given that it occurs in high-altitude areas of the Australian Alps and Tasmania.

The seed of this species is oval and marked with a net-like surface structure. At 1/50th of a gram and only half a millimetre long, the physical traits of Epacris petrophila seed are visible only under a microscope.

The seed photograph in this stamp design is courtesy of the National Seed Bank, Australian National Botanic Gardens.

This endangered shrub occurs naturally only in areas south-east of Busselton, Western Australia.

The species produces a radiating fruit that on maturity releases individual capsules with hard seed coats, which provide protection until conditions are suitable for germination. A multitude of fine hairs assists the seed to disperse over short distances.

This set of stamps contains all three stamps from the Seed Banking Australia stamp issue. 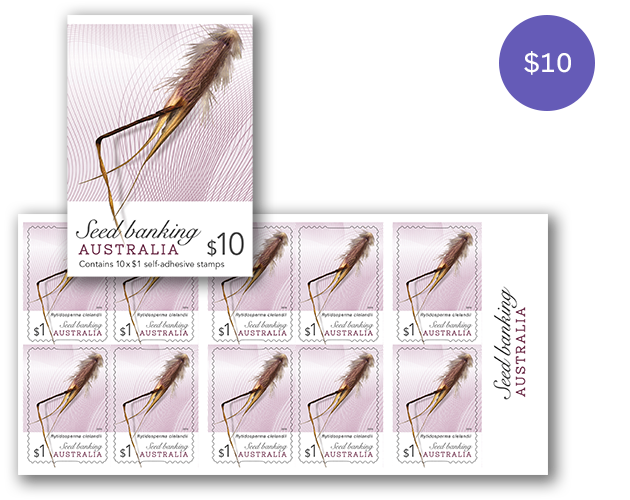