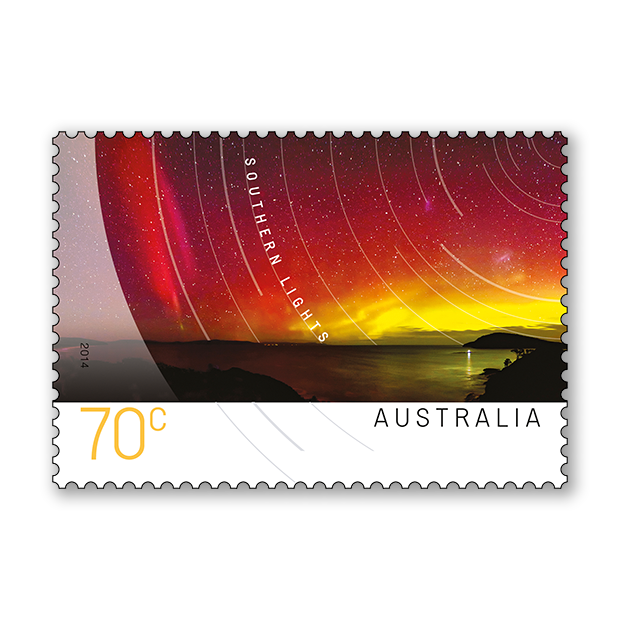 The Southern Lights, formally known as the Aurora Australis, are the Southern Hemisphere’s counterpart to the Northern Lights (Aurora Borealis). Auroras most commonly occur above a discrete band of high latitudes in each hemisphere, known as the auroral zones. Each of the auroral zones is centred on the Earth’s magnetic poles and lies between latitudes of approximately 50˚ and 60˚.

Auroras originate from interactions between the solar wind (the stream of charged particles ejected from the Sun’s atmosphere) and the Earth’s magnetic field. At times of heighted solar activity, the solar wind becomes gusty when clouds of charged particles known as coronal mass ejections (CMEs) are released by the eruption of solar flares above sunspots near the Sun’s surface. At other times, high-speed streams of particles blow towards the Earth from features in the Sun’s atmosphere known as coronal holes. When the solar particles reach the Earth’s vicinity, they can be guided by the Earth’s magnetic field into the upper atmosphere where they transfer energy into the rarefied gases that lie at heights from approximately 100 to 500 kilometres above the surface. This process causes the atmospheric gases to give off light; the result is the aurora, the ethereal coloured glows that occasionally grace midnight skies.

The two main discernible forms of aurora are a diffuse glow, which generally appears towards the poleward horizon, and discrete forms such as arcs and curtains that stretch from east to west as well as rays that may run upward from the horizon. These forms are shaped by the Earth’s magnetic field. When the aurora is sufficiently bright, specific colours may be seen. The most commonly seen colours are green, red and violet; the colours depend on energy of the incoming solar particles, and the type of atmospheric gases they interact with. Sometimes the lights move and change fairly quickly and sometimes they are stable for hours.

The Southern Lights are best seen from the islands of the Southern Ocean such as Macquarie Island, as well as Antarctica. In Australia, they are occasionally observed in the southern skies of Tasmania, although they can sometimes be seen from southern locales on the mainland. The best time of day for viewing is two to three hours either side of midnight, around the time of the equinoxes in March and September, when the solar wind can more directly interact with the Earth’s magnetic field. Viewing is also dependent on being in a southerly location, being at a site of low (or no) light pollution, and a cloudless sky.

The photographs in the stamp designs were all taken in Tasmania. They have been shot using a long exposure, which maximises light and colour in the imagery. The topographical features in the photographs provide not only visual interest but they also ground and contextualise the lights. The circular motif and curved lines in the designs reference star trails produced by the rotation of the Earth. Ron Verdouw captured this remarkable photograph from Browns River, Kingston Beach, Tasmania. He has used an artificial light source to illuminate the foreground and establish a compelling relationship between the landscape and the colours of the sky above. Captured by James Garlick, this photograph was shot from Goats Bluff on the South Arm Peninsula in Tasmania. The location offers a nice clear view, looking southward away from light pollution, which is important for capturing auroras. The panorama consists of nine photos taken in portrait orientation, and then stitched together in post processing. Ron Verdouw took this photograph from Dru Point, Margate, Tasmania. He scouts out locations prior to shooting the lights, so that he can create images that have a strong composition to highlight the relationship between the landscape and the sky above. This photograph was taken by Luke O’Brien at Coles Bay, on Tasmania’s east coast. The mountains on the horizon are the well-known Hazards of Freycinet National Park, one of Tasmania’s most popular tourist destinations.