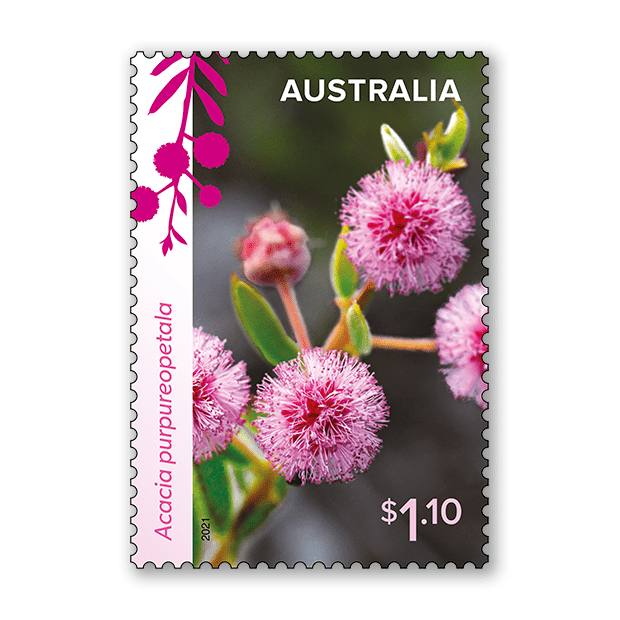 Acacia is the largest genus in the legume sub-family Mimosoideae, which are trees, shrubs or lianas that are distributed in tropical and sub-tropical regions of the world. There are around 1,100 Acacia species, most of which are native to Australia, making it our largest genus of woody plants.

Wattle was essentially adopted as a national flower, when a stylised wattle was incorporated into the second design of the Commonwealth Coat of Arms, which received royal assent in 1912. While Golden Wattle (Acacia pycnantha) enjoyed popular acceptance as Australia's national flower for much of the 20th century, it was not officially proclaimed as the national floral emblem until 1988, the year of Australia's bicentenary. In 1992, 1 September (the first day of spring) was formally proclaimed as National Wattle Day.

Acacias are widely distributed throughout all Australian states and territories, as trees and shrubs. While the flowers of most wattle are yellow (from pale yellow through to intensely golden), there are some exceptions, including the three presented in this stamp issue.

A remarkable, red-flowered form of Cinnamon Wattle (Acacia leprosa) was discovered, in 1995, by two bushwalkers in a forest north-east of Melbourne, Victoria. The flowers of Cinnamon Wattle are usually yellow (the common name comes from its scented leaves, not the colour of the flowers). Upon discovery, 12 cuttings were removed and sent to the Royal Botanic Gardens in Melbourne. Only two of those cuttings survived, and from them thousands of plants were eventually produced. The plant could not be propagated by seed because the resultant individuals produced yellow flowers, so cuttings and micropropagation were used to ensure the flowers maintained their spectacular crimson colour. The Royal Botanic Gardens has breeder’s rights over this colourful cultivar, aptly naming it ‘Scarlet Blaze’. The stamp photograph is by Attila Kapitany.

Acacia purpureopetala, or Purple-flowered Wattle, is the only Australian wattle with purple flowers. This critically endangered species grows on rocky slopes in north-eastern Queensland and flowers between May and September. It is a low sprawling shrub that sometimes has an unusual growth form, with several stems rising from a central point and radiating outwards, like the spokes of a bicycle wheel. There are only about 700 known plants in the wild, where it is threatened by habitat loss, grazing by cattle, mining, road works, invasive weeds and illegal collection. It is one of 30 priority plants on the Australian Government’s list of threatened species. This means that the federal government has been taking action to preserve the species by identifying priority populations, removing invasive weeds, fencing off existing populations, collecting and banking seeds, and establishing off-site populations. The stamp photograph is by Roger Fryer.

Acacia alata var. biglandulosa is commonly known as Winged Wattle, so named for its unusual, flat and continuous wing-like foliage that grows along the length of the branches. The species grows as a shrub to around 1.5 metres high and has masses of white and fluffy ball-like flower heads that appear between May and October. It occurs naturally from Port Gregory to Mount Michael, around 35 kilometres south-east of Geraldton, Western Australia, where it grows in a variety of soils in rocky hills, salt pans and heath-covered areas. While white flowers are not rare among the Australian wattles, they are also not especially common. The stamp photograph is by A Lyne, courtesy Australian National Botanic Gardens.

This set of stamps contains all three stamps from the Wattle Wonders stamp issue. 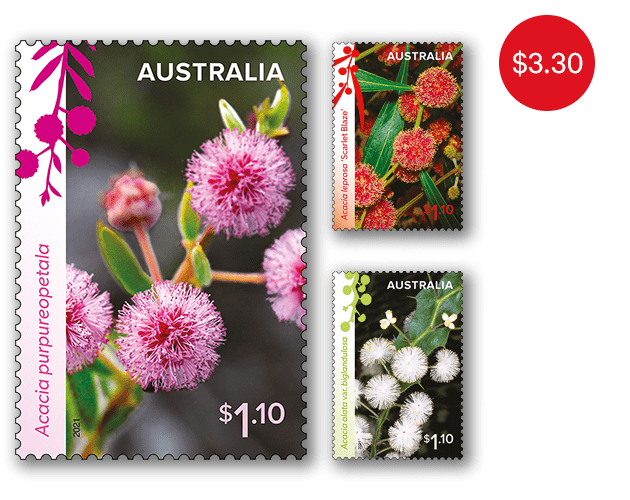 The Wattle Wonders stamp pack contains all three stamps and minisheet from the stamp issue presented in high quality folder. 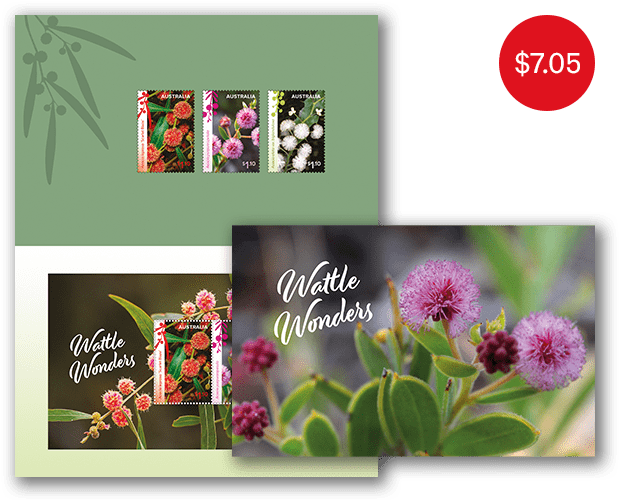 The Wattle Wonders minisheet consists of the three stamps from the issue incorporated into a miniature stamp sheet. 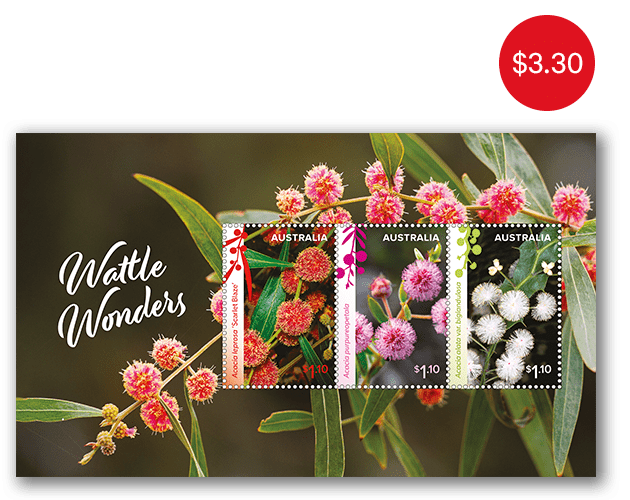 This maxicard set contains the three maxicards from the Wattle Wonders stamp issue. 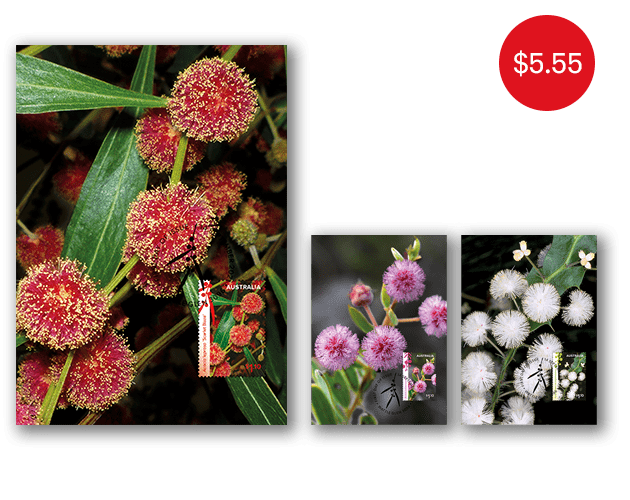