The United Nations Educational, Scientific and Cultural Organization (UNESCO) seeks to encourage the identification, protection and preservation of cultural and natural heritage considered of outstanding universal value to humanity. To be inscribed on the UNESCO World Heritage List, a site must meet strict criteria and be of outstanding global significance. There are 20 Australian properties on the World Heritage List. They comprise 12 sites recognised for their natural significance, four for their cultural value, and four that combine natural significance with cultural value.

This stamp issue features the properties in Australia inscribed solely for their outstanding cultural importance. The stamps present a photograph of each site, together with a photograph of a relevant artefact or aspect.

In 2004, the Royal Exhibition Building and Carlton Gardens in Melbourne became the first Australian UNESCO World Heritage Cultural Site. The building, or Great Hall, is significant as the oldest surviving building in the world from the Great Exhibition era still operating as an exhibition hall.

The building and gardens were designed by Joseph Reed to host the Melbourne International Exhibition in 1880 and the Melbourne Centennial International Exhibition in 1888, at the time the largest events ever staged in Australia. The building was the venue for the formal opening of the first parliament of Australia, in 1901. It became a makeshift hospital during the great influenza epidemic of 1918 and hosted wrestling, weightlifting and basketball events in the 1956 Melbourne Olympic Games. As well as the building itself, the stamp showcases an interior detail from the ceiling of the magnificent dome.

The most recent cultural site to be inscribed, in 2019, is the Budj Bim Cultural Landscape, located at Lake Condah on traditional Country of the Gunditjmara people, in Victoria’s Western District. Budj Bim is the ancestral creation being called Mount Eccles by the Europeans. The Gunditjmara manage the Budj Bim landscape through the Winda-Mara Aboriginal Corporation and other Aboriginal organisations. A large part of the area is the Mount Eccles National Park, managed by the Gunditjmara and Parks Victoria.

This now-dormant volcano is the source of the Tyrendarra lava flow, which, as it flowed to the sea, changed the drainage pattern in this part of western Victoria, enabling the Gunditjmara to develop ingenious ways to harvest kooyang, or Short-finned Eel, to ensure a year-round supply, which were smoked and traded. The site consists of three serial components containing one of the world’s most extensive and oldest aquaculture systems. Stone eel traps used by the Gunditjmara have been carbon dated to 6,600 years, making them considerably older than Egypt’s pyramids. The woven eel basket featured on the stamp resides in the collections of Museum Victoria.

The Cascades Female Factory, Hobart, is one of 11 Australian convict sites inscribed on the World Heritage List in 2010. These sites are spread across the country, from Western Australia to Norfolk Island. Between 1788 and 1868, around 166,000 men, women and children were condemned by British justice and sent to the Australian colonies. Together, these convict sites present the best surviving examples worldwide of large-scale convict transportation and the colonial expansion of European powers through the presence and labour of convicts. The Cascades is significant as one of the few female convict factories with visual fabric and ruins remaining.

Between 1803 and 1853, some 76,000 convicts were sent to the far-flung penal colony of Van Diemen’s Land, or Tasmania. The Cascades was established as a workhouse for female convicts and operated between 1828 and 1856. Intended to segregate women for their own protection and moral improvement, at its peak the factory held 1,200 women and children in overcrowded and disease-ridden conditions, with women labouring up to 12 hours per day. The irons featured on the stamp, from the site’s collection of artefacts, represent the women’s arduous work.

Australia’s most famous building, the Sydney Opera House, was formally opened by the Queen in 1973. Acclaimed throughout the world, this great modernist masterpiece was designed by Danish architect Jørn Utzon, who was awarded the project in 1957 by an international jury.

With its prominent location on Bennelong Point, the building is a fitting response to its spectacular harbour setting. The building’s dynamic structure resembles sails or a giant bird about to take flight. The building’s construction was mired in controversy, with Utzon resigning from the project in 1966, before its completion. In 1999, he was persuaded to return in order to restore the interior to his original vision. In 2003, Utzon received the Pritzker Prize, architecture’s highest honour. The Sydney Opera House was inscribed on the World Heritage List in 2007 as “a masterpiece of 20th century architecture”.

This set of stamps contains all four gummed stamps from the World Heritage Australia stamp issue. 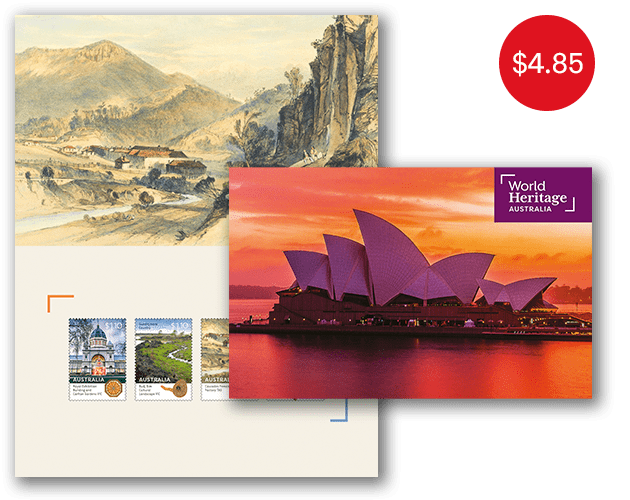 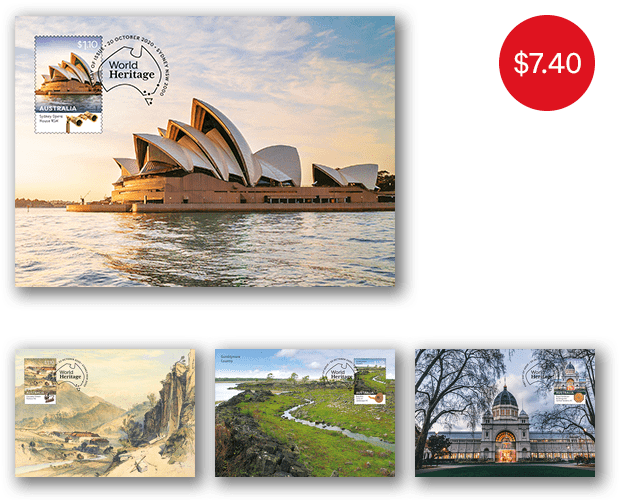