Commemorating the final year of the Great War

The fighting on the Western Front and in the Middle East that raged during 1917 continued into the early months of 1918. A major consequence of the bitter fighting in France and Belgium the previous year had been the enormous casualties. With fewer men voluntarily enlisting in the Australian Imperial Force, the Australian government held a second vote on conscription. As it had the previous year, the issue of conscription polarised the nation along sectarian, class and political lines, and was narrowly rejected a second time.

The Centenary of WWI: 1918 stamp issue, released on 2 October 2018 and designed by Lisa Christensen of Three Branches Design, charts some of the major events and themes from this final year of the war, as well as a key figure. The stamp photographs are from the collection of the Australian War Memorial.

On the Western Front, the year began with a major German offensive that successfully ended the stalemate of trench warfare. Following the collapse of the Eastern Front, more than a million German soldiers were transferred to the west for an offensive that sought to split the British and French Armies along the Somme River and capture the vital logistical centre of Amiens. Having entered the war on the side of the allied forces, US troops had not yet arrived in France to help stem the German onslaught. The Germans began their offensive in March 1918 and succeeded in advancing to within artillery range of Amiens.

Australian troops were in Belgium and spared the German offensive that fell on British forces on the old 1916 battlefields. They were rushed to defend Amiens alongside other British formations, fighting notable actions at Dernancourt and Hangard Wood in the opening weeks of April 1918. German troops succeeded in capturing the town of Villers-Bretonneux but were ejected by Australians from the 13th and 15th Brigades on the evening of 24¬–25 April 1918 (the third anniversary of the Gallipoli landings). With the Germans unable to advance any farther, Amiens was saved and the line stabilised, and the allied armies began preparations for a counter-offensive.

In May 1918, Major-General John Monash was appointed commander of the Australian Corps – the reorganised Australian infantry divisions – and promoted to lieutenant general. A meticulous planner and brilliant tactician, Monash was given the opportunity to execute the British Army’s first offensive operation in six months in a carefully planned attack on Hamel, north of Villers-Bretonneux, on the morning of 4 July 1918. The attack involved close coordination between infantry, tanks, aircraft and artillery. Three understrength Australian brigades were bolstered by American troops, and they succeeded in capturing their objectives in just 93 minutes. Monash’s belief in the effectiveness of exhaustive planning and coordinated weaponry was clearly justified and set the model for future allied offensives.

Lieutenant General Sir Monash is recognised in the stamp design as Australia’s most celebrated leader of the Great War. The background photograph shows his knighthood ceremony at the Australian Corps’ headquarters, on 12 August 1918. The end in sight

The tactical successes achieved through Monash’s leadership at Hamel were applied during the crucial Battle of Amiens, fought by British, Australian and Canadian troops near Villers-Bretonneux on 8 August 1918 – the so-called “black day” of the German Army. The stamp “Last 100 days” shows Lieutenant Rupert Frederick Arding Downes MC addressing his platoon before it advances onto nearby Harbonnières on this same day. It is the beginning of the end on the Western Front.

Having broken through German lines, the Australian Corps fought a series of successful actions that brought them to within sight of the Hindenburg Line. In September, they captured the German bastions of Péronne and Mont St Quentin, and, alongside British and American troops, broke through the Hindenburg Line at Bellenglise and fought their last action in the Great War at Montbrehain in early October. After several weeks of intense fighting, the Australian Corps was resting when it learned Germany had signed an Armistice, on 11 November, which ended the four years of bloodshed on the Western Front. The guns had already fallen silent in the Middle East nearly two weeks earlier, following the British capture of Damascus. Australian troops had been engaged in this theatre of conflict through 1918, with the ANZAC Mounted Division applying pressure to the Ottomans as the British continued their advance into Palestine, having already occupied Lebanon and Syria in early 1918. The Ottoman forces signed an Armistice on 31 October, effectively ending the war in the Middle East.

The “Armistice declared” stamp represents the end to hostilities. The jubilant mood shown in the background image, with young women rejoicing on the streets of Sydney, is in contrast to the mood that prevailed on the battlefields, where the bodies of many mates lost in battle would be left buried in devastated landscapes. Lieutenant General Monash may have demonstrated his strategic and leadership mettle on the battlefield, but these skills also proved invaluable in the complex logistical challenge he commanded in repatriating 167,000 Australian troops at war’s end. The “Return home” stamp represents the long process of homecoming. An egalitarian system ensured that those who enlisted earliest were the first to return home, with the last major transports arriving in Australia in early 1920. 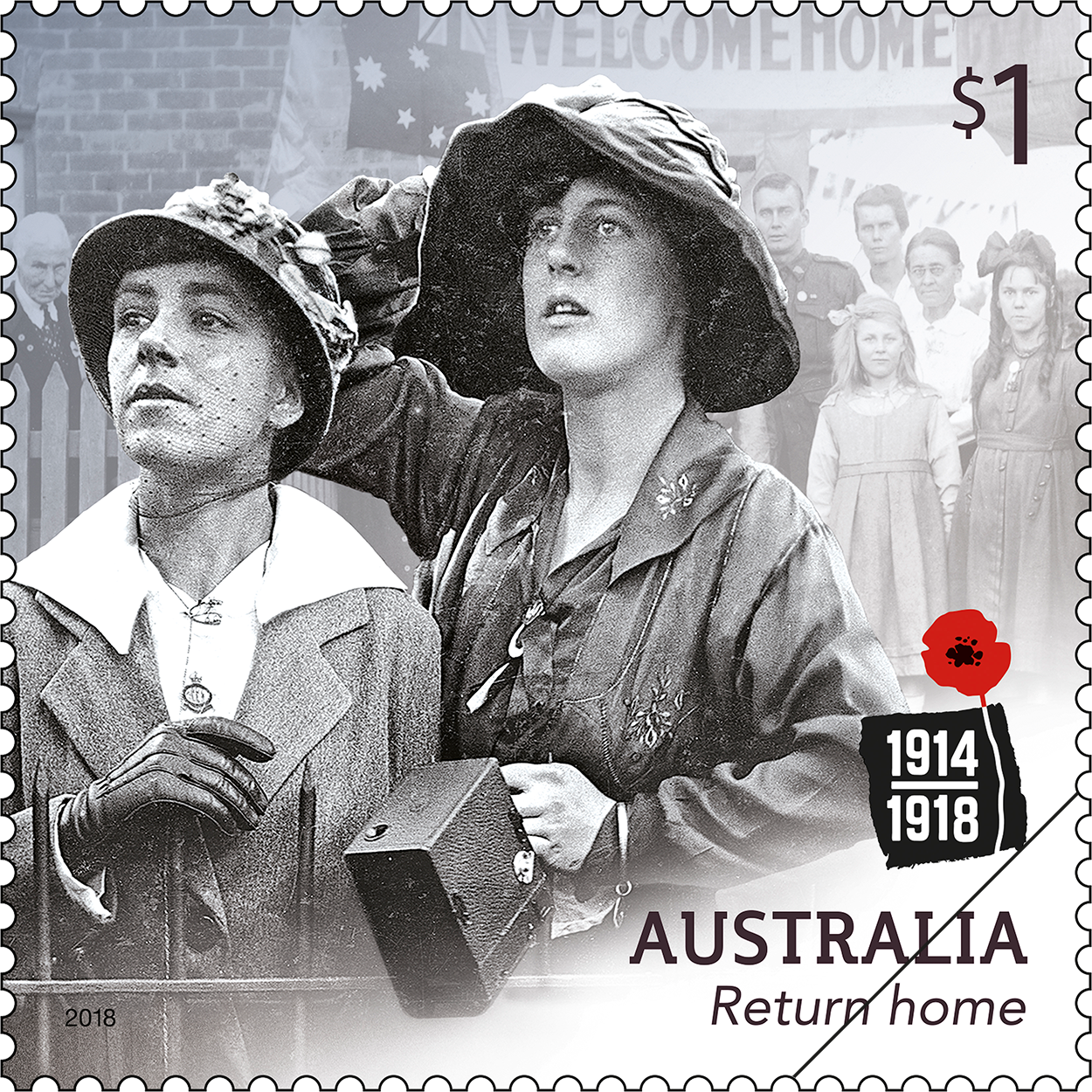 The war was costly for Australia, which at the time had a population of around five million: some 156,000 were wounded during the war and more than 60,000 died. The Imperial War Graves Commission (now known as the Commonwealth War Graves Commission) was established under Royal Charter to record and honour the war dead interred on foreign soil.

One hundred years later it continues its founding purpose as custodian of the cemeteries, memorials and burial plots of service personnel, preserving not only the physical landscapes of these resting places but also the memory of all those bodies that remain. “Honouring the fallen” shows French children tend the graves of Australian soldiers at Adelaide Cemetery in Villers-Bretonneux, France – a stark reminder of the thousands of Australian soldiers who did not return home and the mixture of grief and gratitude that followed. 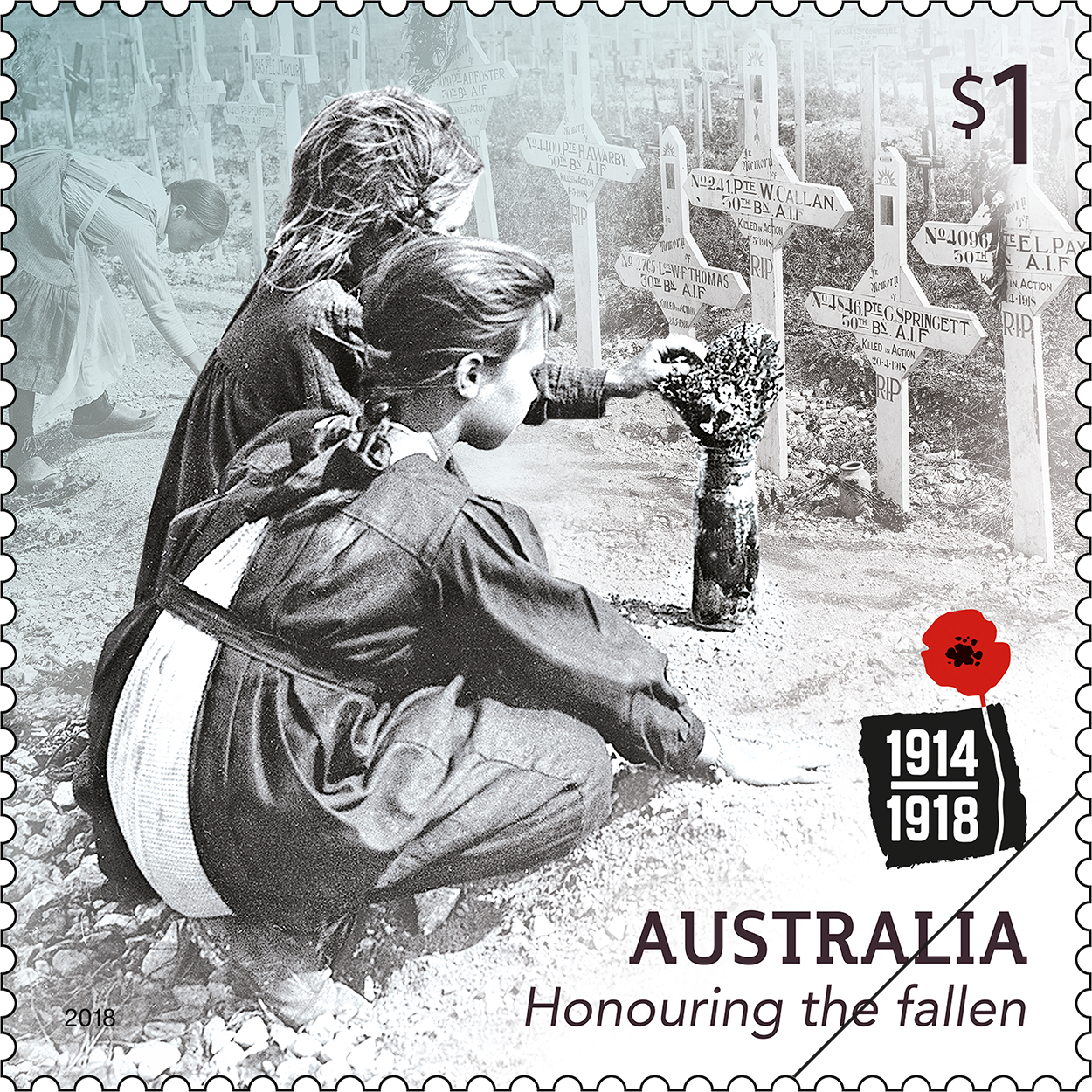 As well as the standard range of products, collectors will enjoy the many special additions to the products range. There’s a prestige booklet Ties to Home: The End of the Conflict, the final in a series of five discusses the role of the postal service throughout World War I, including the role mail played in boosting the morale of the troops. It also includes names on a roll of honour that recognises the officers of the Postmaster-General’s Department who lost their lives, or were reported missing, while on active service during the Great War. There are also three postal numismatic covers: one focusing on Lieutenant General Sir John Monash, commander of the Australian troops from 1918, one focusing on the Armistice and another on Remembrance. View the gallery and technical details from this issue.