Exploring the rich cultural history of the AAT

Human engagement with Antarctica is relatively short, but it has given rise to a rich cultural legacy. Australia’s direct encounters with this inhospitable southern continent stretch back to the late 19th century, with physicist Louis Bernacchi being the first Australian to step foot on the continent, in 1898–99, three years after the first recorded landing. But our connection with Antarctica pre-dates this, through whaling and sealing in subantarctic waters from the early 19th century and with Hobart used as a port of call for supplies by early European and American expedition parties.

The history of Australia’s Antarctic association exists in materials ranging over documents, photographs, recordings, artefacts, monuments, built heritage and more. The AAT Cultural Heritage stamp issue, which will be released on 19 September, presents cultural artefacts that relate to three key eras within Antarctica’s rich history. The stamp designs are by Lynda Warner.

Spanning the late 19th and early 20th centuries, the exploration era is often known as the heroic period. Several countries undertook voyages to Antarctica during this time, powered by the determination and extreme resilience of expedition members. Australians made significant contributions during this era, through scientific observations and recordings and through charting new territory. Australia had an interest in and presence on Robert Scott’s Discovery expedition (1901–04), and similarly on Ernest Shackleton’s Nimrod expedition (BAE; 1907–09), during which Australians attained the south magnetic pole in the longest man-hauling sled journey ever made.

Douglas Mawson’s Australasian Antarctic Expedition (1911–14) charted coastline and investigated the ocean between Australia and Antarctica, and explored Macquarie Island; and Ernest Shackleton’s ill-fated British Trans-Antarctic Expedition (1914–17), which included an Australian contingent, epitomised the strength of the human spirit and ingenuity. While the story of the latter expedition is known through the well-documented travails of Shackleton’s main party, the story of the Ross Sea party is lesser known. This party travelled on the Aurora to McMurdo Sound, from where they would lay supplies for the main party. Unknown to them, the Endurance became trapped in pack-ice and was eventually destroyed. The men of this party laid supplies by sledge over 169 days, during which three of them perished. The Aurora, meanwhile, had broken its mooring during the winter of 1915 and been carried north by the ice, stranding the stores party. The survivors were eventually rescued by Shackleton and John King Davis in 1917. The aneroid barometer featured in the stamp design was given to Australian physicist Alistair Keith Jack, a member of the Ross Sea Party, by Ernest Shackleton. The barometer was made by the London-based company Cary. The barometer – held in the Museums Victoria collection and photographed by Michelle McFarlane – represents not only polar exploration during this period, but also the value of scientific observations, specifically meteorological research of the little-known continent.

Douglas Mawson’s contribution to Antarctic exploration and science spanned the exploration and interwar eras. A preeminent figure of Australian polar history, he led BANZARE (British, Australian and New Zealand Antarctic Research Expeditions) voyages in 1929–31. Many crucial scientific observations in multiple disciplines were made during these scientific expeditions, with great numbers of natural history specimens collected and much coastline mapped. While every expedition had a political dimension, the BANZARE voyages, financed by the three governments and Melbourne-based businessman MacPherson Robertson, were perhaps more explicit in this respect, resulting in territorial proclamations for Britain. The extensive mapping and the proclamations were significant for Australia’s eventual claim of 42 per cent of the Antarctic continent. 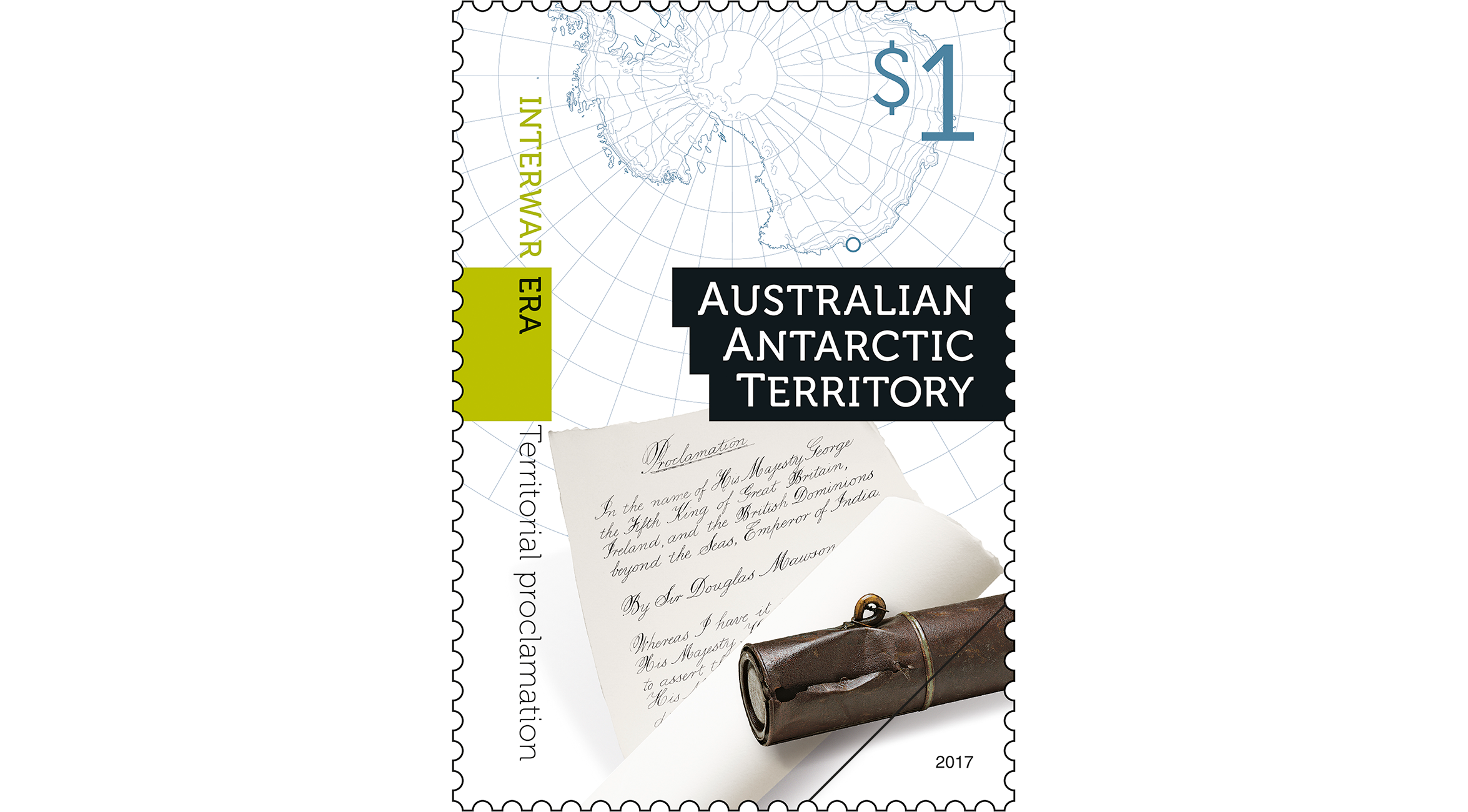 The stamp design features the proclamation over King George V Land that Australian polar explorer and scientist Douglas Mawson signed on behalf of the British sovereign on 5 January 1931. It was hand-written in copperplate by physicist and surveyor Alexander Kennedy and signed by Mawson, who read it aloud to his men at Cape Denison. They then buried it at the site in a canister fashioned from empty food cans. It was retrieved from beneath the cairn by the Australian Antarctic Expedition in 1977 and is now held in the collection of the National Museum of Australia.

The proclamation is important to Australia because it forms the basis of Britain’s transferal of territory to Australia under the Australian Antarctic Territory Acceptance Act 1933. The document is also significant for its connection with eminent Australian Douglas Mawson.

Following World War II, scientific interest in Antarctica was renewed, facilitated by Mawson’s lobbying of government. ANARE (Australian National Antarctic Research Expedition) was formed in 1947 to undertake Australian Antarctic research, with a program coordinated by physicist Dr Phillip Law, who was appointed director of the Antarctic Division in 1949.

A stronger research presence was established through the construction of stations, first at the subantarctic Macquarie and Heard Islands, in 1947 and 1948 respectively. Until Australia secured the Kista Dan, ANARE was unable to really expand its research program onto continental Antarctica. The ice-strengthened vessel enabled the establishment of Mawson station, the first permanent continental base, was built in 1954; Davis was established in 1957, coinciding with International Geophysical Year activities; and Wilkes was taken over from the USA in 1959 (eventually replaced by Casey). These bases and the development of more sophisticated science, communication and transport technologies allowed for the expansion of polar research in this postwar period.

The tracked Weasel M29 vehicle was introduced to Antarctica postwar, the all-terrain vehicle having been used extensively by the US army during World War II. It was a primary Antarctic traverse vehicle for ANARE until the mid-1960s. 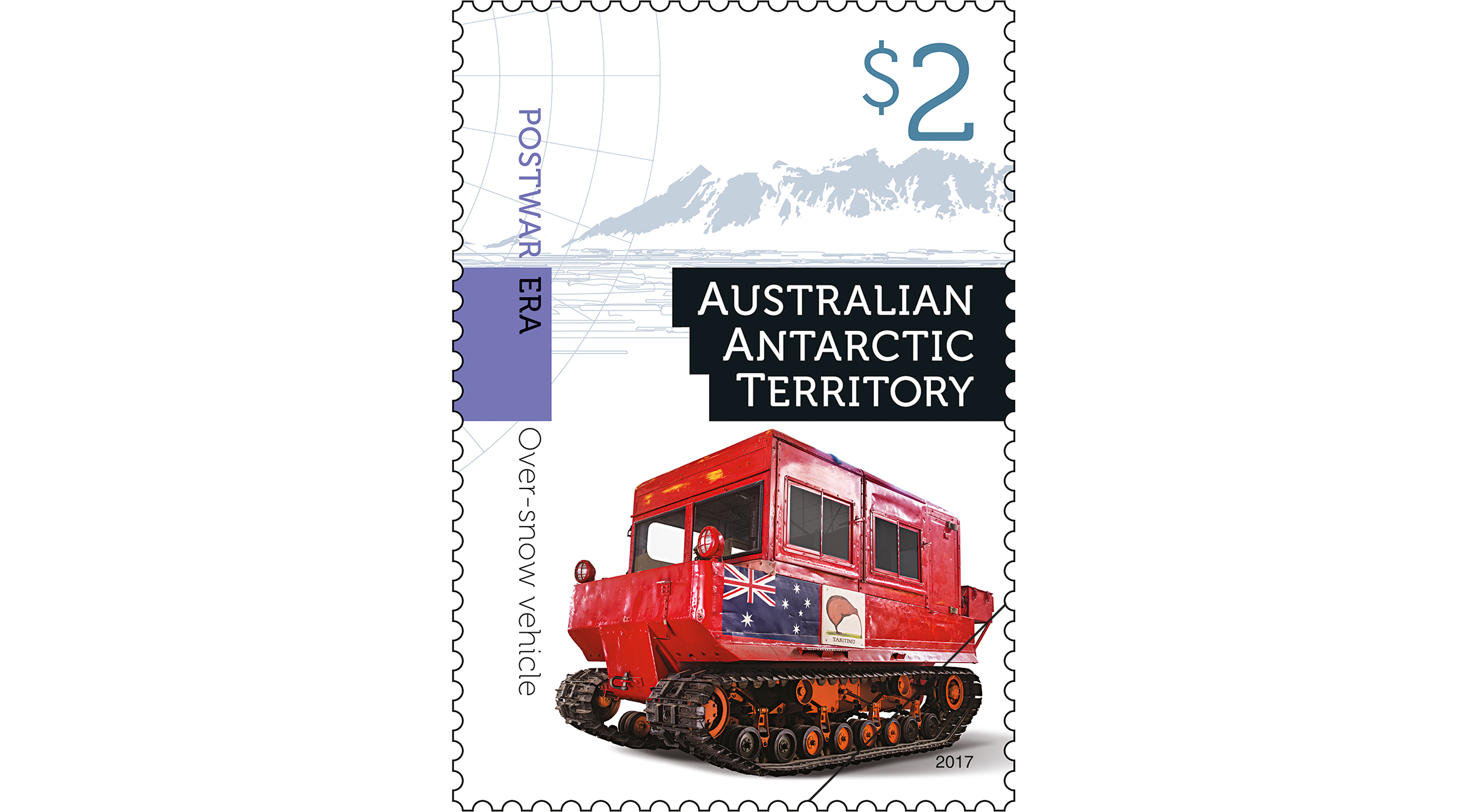 The restored Weasel shown in the stamp design, in a photograph by Jonathan Wherrett, was used on ANARE’s 1962–63 Wilkes–Vostok traverse, an historic journey of 3,000 kilometres to the Russian station in the Antarctic interior. The traverse was undertaken by a party of six, led by RB Thompson, with a scientific program that included seismology, glaciology, geomagnetism and meteorology. Leaving the coast base of Wilkes on 17 September 1962, the party travelled with two Weasels, two D4 Caterpillar tractors and nine sleds, with the Weasels achieving two miles to the gallon. The party arrived at Vostok on 18 November and returned to Wilkes on 14 January 1963. The restored vehicle is in the collection of the Australian Antarctic Division.

View the gallery of stamps and technical details for this issue.

The AAT Cultural Heritage stamp issue is available from 19 September 2017, online, at participating Post Offices and via mail order on 1800 331 794, while stocks last.