Shining a light on the lighthouses of Sydney

Despite the use of Global Positioning System (GPS) satellite technology for navigation, the more than 350 lighthouses still in existence across Australia’s vast coastline still play an important role. They also remind us of the history of early sea travel and their evolution charts important technological developments.

Sydney’s four coastal and 12 harbour lights warn and guide ships travelling along the coast, coming into Port Jackson and travelling around the major waterways of Sydney. Designed by Jo Muré of the Australia Post Design Studio, the Lighthouses of Sydney stamp issue, which will be released on 23 October 2018, presents moody photographs of Macquarie, Hornby and Robertsons Point – three historic Sydney lighthouses that still form part of Sydney’s system of maritime safety.

Hornby Lighthouse (1858) is one of the oldest surviving lighthouses in Australia. Its distinctive colour scheme may have something to do with the two 1857 maritime disasters at The Heads that brought about its construction: the loss of the Dunbar and the Catherine Adamson.

Hornby was designed by the official NSW colonial architect of the time, Alexander Dawson (1817–?). Hornby Lighthouse was opened in 1858 by Sir William Denison (1804–1871), Governor of New South Wales. It was most likely named after the family of Governor Denison's wife, Caroline Lucy (1818-1899), daughter of Admiral Sir Phipps Hornby (1785–1867) who was Commander in Chief of the British Pacific Fleet in the 1860s.

The stamp photograph is by Bruce Hood. 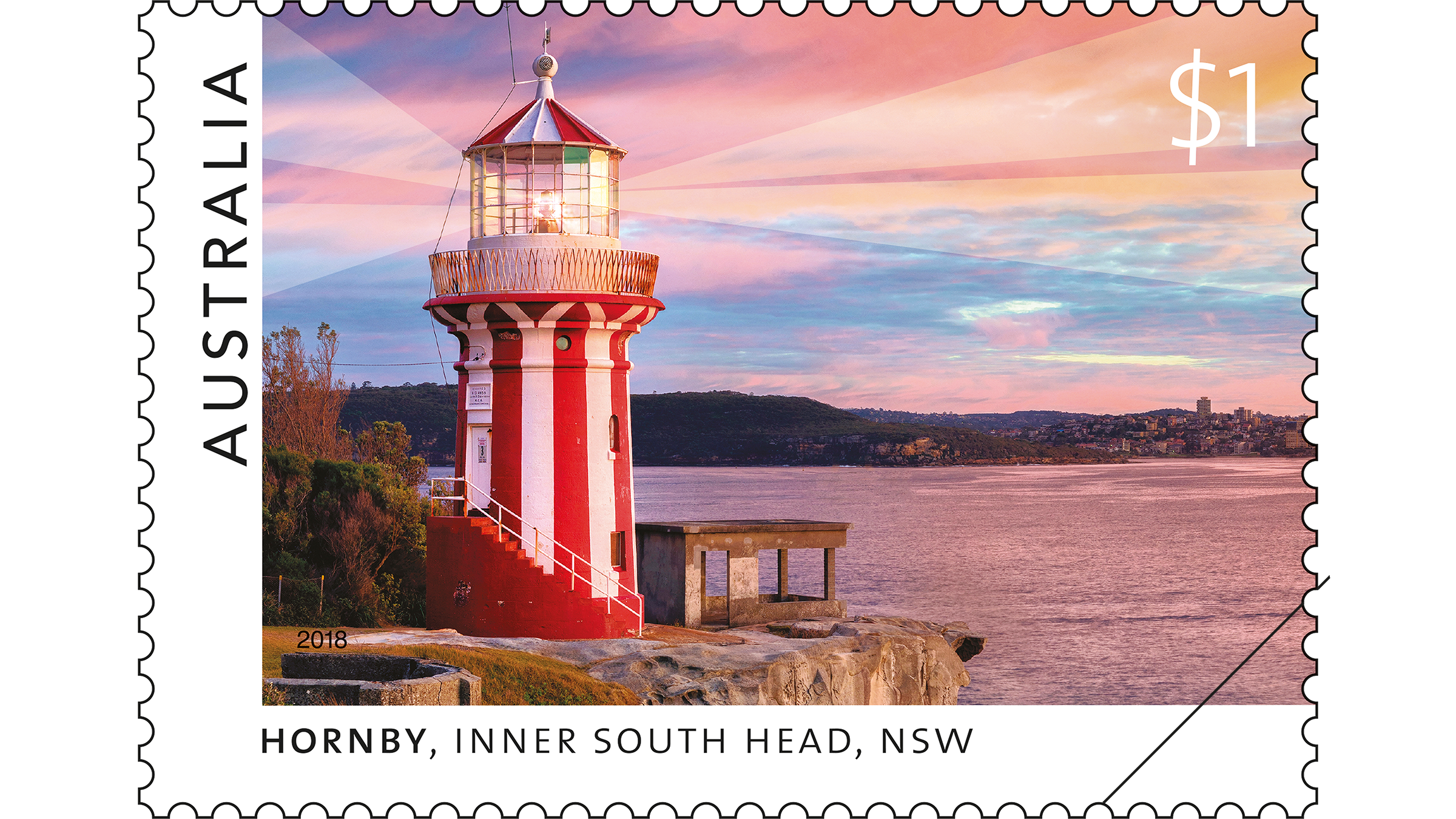 Roberstons Point Lighthouse is located in Cremorne Point, a harbour-side suburb on the lower North Shore of Sydney. The tip of Cremorne Point is known as Robertsons Point, after James Robertson (1781–1868), who was appointed superintendent of government clocks and was given a significant land grant in the area. James Robertson was the father of five-time premier of NSW Sir John Robertson (1816–1891), known for his work on land reform.

Robertsons Point Lighthouse is a sister to the Bradleys Head Lighthouse (1905), named after William Bradley, an officer of the First Fleet guardship Sirius.

The stamp photograph is by Ryan Payne. The construction of a new Macquarie Lighthouse began in 1881 was completed in 1883. The new tower had been built to replace Australia’s first lighthouse, the original Macquarie Tower, constructed in 1818, which had disintegrated due to the poor quality of the locally quarried sandstone used in its construction.

The new lighthouse, designed by another official NSW colonial architect James Johnstone Barnet (1827–1904), was essentially a replica of the original tower, but sturdier in terms of materials and construction techniques. For a short time the two towers stood side by side, until the original was demolished in 1884. Macquarie Lighthouse was fully automated in 1976, and keepers were withdrawn in 1989.

The stamp photograph is by Matthew Kelly. These historic lighthouses are discussed further in a prestige book, released with this issue. 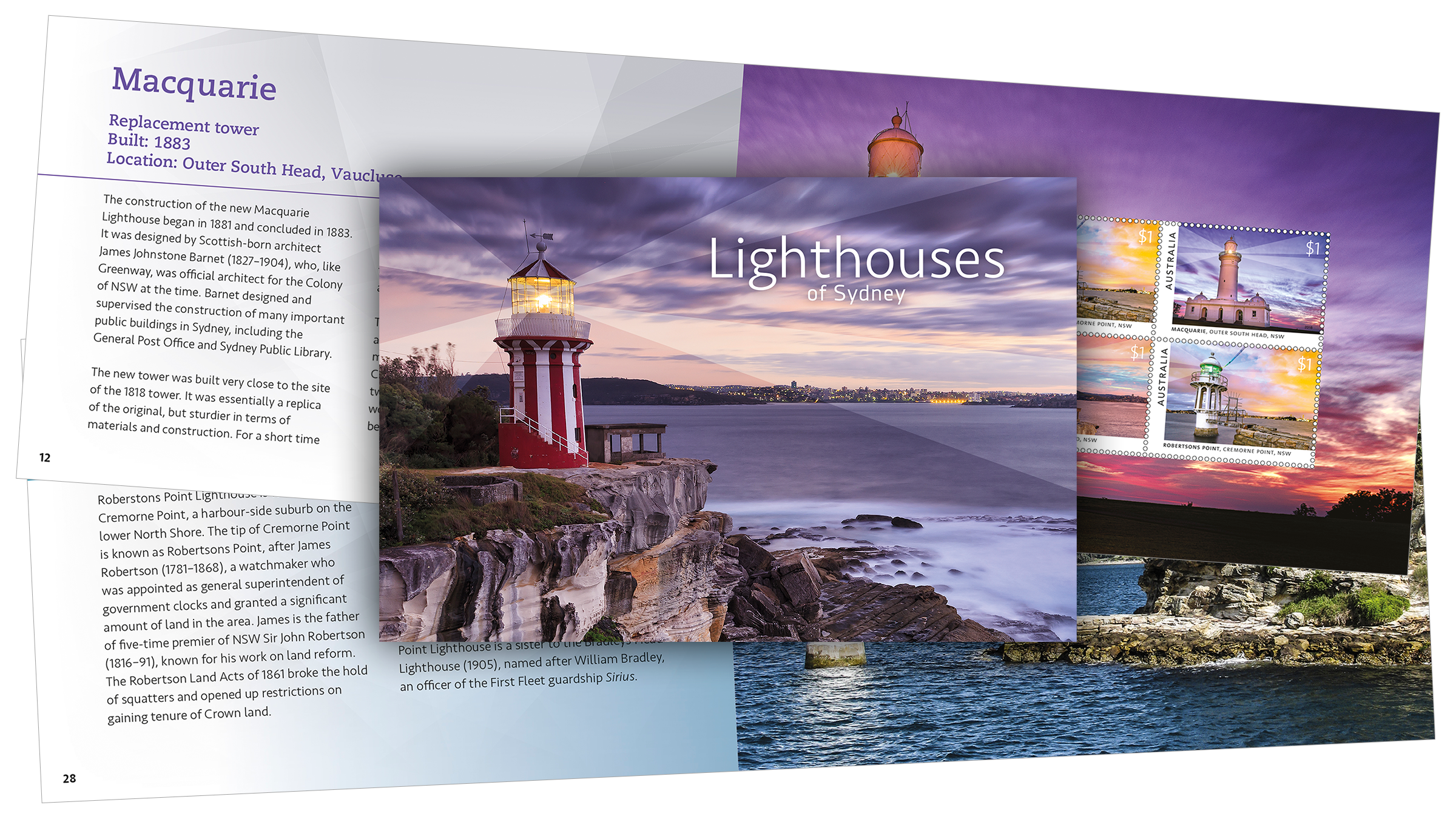 200 years since the first Macquarie lighthouse

A fire kept alight by convicts and an iron basket on a tripod were two methods of guiding vessels passing through Sydney’s Heads. However, Australia’s first lighthouse was Macquarie Lighthouse, first exhibited on 30 November 1818.

The Macquarie Lighthouse (also known as Macquarie Tower) was commissioned by the Governor of NSW, Major General Lachlan Macquarie (1762–1824). It was designed by the prominent convict architect Francis Greenway (1777–1837), who was the first official civil architect for the Colony of NSW. While the original tower was pulled down 66 years later, it’s creation forms an important moment in Australia’s maritime history.

To commemorate 200 years since the construction of the 1818 Macquarie Lighthouse, we have released a medallion cover and a postal numismatic cover.

The attractive 61 millimetre nickel plated medallion features a photograph of the original 1818 lighthouse and the 1883 tower that still stands today. The coin in the postal numismatic cover is a $2 uncirculated coin from The Perth Mint and features a “200 years” design based on the 1818 tower. The Lighthouses of Sydney stamp issue is available from 23 October 2018, online, at participating Post Offices and via mail order on 1800 331 794, while stocks last.