Departing Melbourne on 8 February 1948, the HMAS Wyatt Earp was Australia’s first sea vessel to voyage to Antarctica following World War II. The HMAS Wyatt Earp was requisitioned from the Australian Navy to undertake the first Australian National Antarctic Research Expedition (ANARE). The key aim of the ANARE expedition was to explore sites for a permanent research base in King George V Land, within the Australian Antarctic Territory, established by the transfer of sovereignty from Britain to the Commonwealth government in 1933. Scientific work would be conducted in several fields, coordinated by Senior Scientific Officer Dr Phillip Law.

While extreme weather and pack ice prevented the Wyatt Earp from reaching the Antarctic continent, the Vought Kingfisher floatplane, transported on the deck of the Wyatt Earp, undertook aerial surveying. Scientific observations and recordings were made, thereby securing the future of Australia’s research program. However, the 1948 expedition demonstrated that, despite that Wyatt Earp’s polar record, the ship was too small and underpowered for its role as an Antarctic research vessel.

The stamps and minisheet have been illustrated and engraved by Norwegian artist Martin Mörck, and printed using a combination of traditional intaglio techniques and offset printing. Read more on Intaglio and the incredible art of stamp engraving.

Built in Norway in 1919 and first named the Fanefjord, the Wyatt Earp was purchased by the Australian Navy during World War II and named HMAS Wongala. The ship was used as an ammunition and stores carrier, and then as a guard support in South Australia. In December 1946, at the urging of Douglas Mawson, the Australian government planned to renew Australian Antarctic exploration and committed to significantly refurbishing the ship. Renaming it HMAS Wyatt Earp, the ship was readied for Antarctic service with the newly established Australian National Antarctic Research Expedition (ANARE) during 1947.

The RAAF Vought-Sikorsky OS2U Kingfisher was an observation floatplane with a 450hp engine built in the United States and used during the war. Australia purchased 18 such planes in 1942, including the one registered A48-13, which was used on the ANARE expedition. Some 10.31 metres in length, with a wingspan of 10.95 metres, the Kingfisher was painted yellow and an engine pre-heater was installed before it travelled to the frozen south. The small wooden-hulled Wyatt Earp carried the plane (with its float dissembled) on its deck, so that it could be used in aerial reconnaissance and surveying work. The Kingfisher made two one-hour reconnaissance flights near the Ninnis and Mertz glaciers, King George V Land, on 13 March 1948, before the expedition headed to the Balleny Islands.

This stamp design shows the relationship between the Wyatt Earp and the Kingfisher, with the latter suspended before being lowered into the water.

This set of stamps contains all three stamps from the AAT: Wyatt Earp Expedition, 1948 stamp issue. 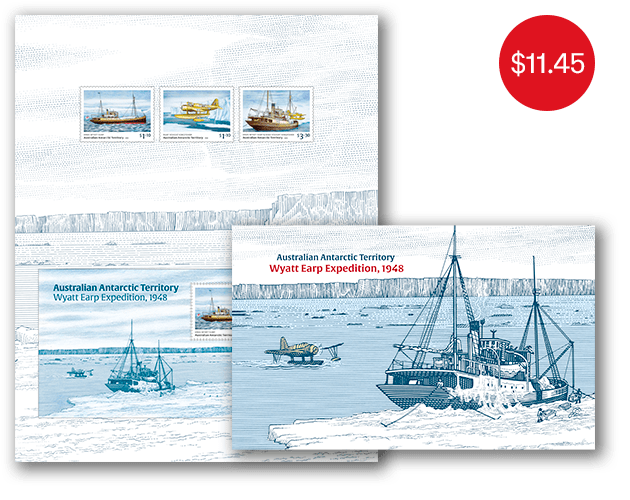 The AAT: Wyatt Earp Expedition, 1948 minisheet consists of the three stamps from the issue incorporated into a miniature stamp sheet. 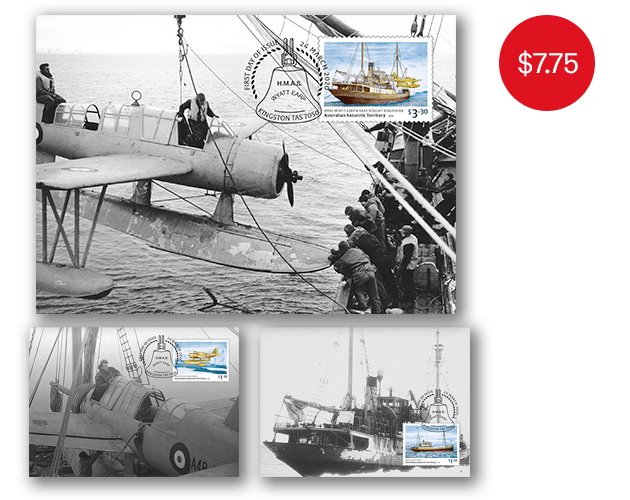