In recent decades, fibre art by Aboriginal and Torres Strait Island peoples has achieved national and international recognition for its beauty, complexity and cultural significance.

This issue features contemporary fibre art by Yolŋu women of the small inland community of Gapuwiyak in north-east Arnhem Land, Northern Territory. The 900-strong community of Gapuwiyak includes people from 11 interconnected Yolŋu groups, including the Gupapuyngu, on whose land Gapuwiyak was built. The Yolŋu-owned Gapuwiyak Culture and Arts was established in 2009 and provides artistic support and a commercial outlet for more than a hundred artists from Gapuwiyak and surrounding homelands.

The artists working from Gapuwiyak Culture and Arts have long had a reputation for producing a range of exceptional fibre and other artworks. The three artists whose work is featured in the stamp designs make baskets and containers, called bathi, by skilfully twining, coiling or looping plant fibres that have been coloured with natural bush dyes. The fibre work of all three master weavers is held in collections nationally and internationally.

Most Gapuwiyak bathi are made from gunga (Pandanus spiralis), often found growing along watercourses or coastal fringes and dune systems in northern Australia. The other plant fibre often used in bathi is kurrujong (Brachychiton diversifolius) or balgurr. The inner bark of the tree trunk is spun to produce string bags (gay’wu) as well as the cord attached to the top of the bathi, such as we see in the twined cone-shaped basket by Mary Djupuduwuy Guyula, presented in this stamp design. The twining technique is a process by which two lengths of pandanus are twisted and worked simultaneously and horizontally across a series of vertical or radiating spokes, which forms the frame. The stamp photograph is by Louise Hamby.

The coiling technique is comparatively recent in Arnhem Land, originally introduced by missionaries in the early 20th century, who learnt it from Aboriginal peoples in south-eastern Australia. The basket by Nancy Walinyinawuy Guyula presented on this stamp is a coiled bathi. The technique involves the weaver tightly coiling a bundle of pandanus fibre around in a spiral from the base to the outer edge, while stitching it to the coil beneath with a separate fibre thread. The stamp photograph is by Leise Knowles.

This set of stamps contains all three stamps from the Aboriginal Fibre Art stamp issue. The Aboriginal Fibre Art stamp pack contains all three stamps from the stamp issue presented in a high-quality folder. 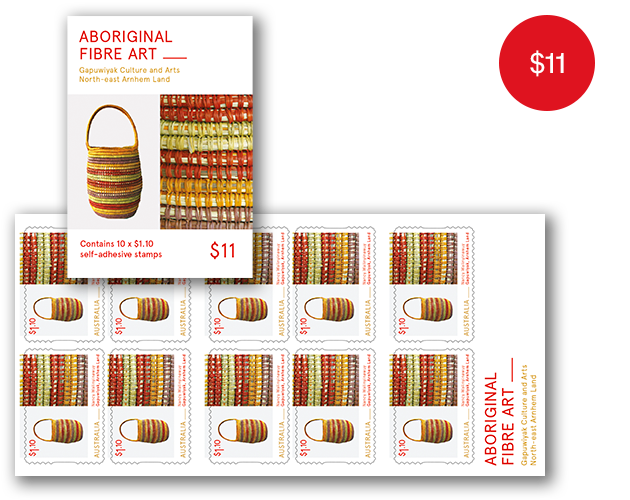