Art of the Desert This issue features works by artists from the Western Desert region. Two were associated with the Warlayirti Artists in Balgo, Western Australia (Boxer Milner and Eubena Nampitjin) and two with the artists’ cooperative at Papunya Tula, Northern Territory (Fred Ward Tjungurrayi and Walter Tjampitjinpa).

Warlayirti Artists is an Aboriginal owned and governed, not-for-profit organisation that supports the cultural traditions of the Wirrimanu (Balgo), Kururrrungku (Billiluna) and Mulan communities. Established in 1987, Warlayirti Artists represents more than 200 artists across these three communities, which are in the Kutjungka region of Western Australia.

Papunya is a settlement 240 kilometres north-west of Alice Springs. The Papunya Tula Art Movement began in 1971 when a teacher encouraged some men to paint a blank school wall. This triggered substantial community interest, and many of the men continued their new-found interest in painting. In 1972, the artists established their own company, which represents 120 artists and is now entirely owned and directed by traditional Aboriginal people from the Western Desert, predominantly of the Luritja/Pintupi language groups.

Boxer Milner (c. 1935–2009), Jaru people, was a senior lawman and custodian of the Purkitjii (Sturt Creek) area. Milnga-Milnga, the artist’s birthplace relates to the Sturt Creek flood plain between the Great Sandy Desert and the Tanami Desert. Boxer Milner painted with Warlayirti Artists at Wirrimanu (Balgo).

Fred Ward Tjungurrayi (c. 1948–), Pintupi, was born at Purkitjarra, east of Kiwirrkura in the sandhill country of the Western Desert. He painted with Papunya Tula Artists in the 1980s and now works with Kayili Artists at Patjarr. His painting relates to the journey of the Tingarri ancestral elders from the sea to the desert.

Eubena Nampitjin (c. 1925–2013), Wangkajunga, was a highly regarded law woman and artist in the Balgo community. Her art focused on her homelands around Tjintalpa in the Great Sandy Desert. The artist painted with Warlayirti Artists in Wirrimanu (Balgo).

Walter Tjampitjinpa (c. 1912–81), Pintupi, was one of the founders of the Papunya art movement in the early 1970s. A senior man and ceremonial leader, he was custodian of the Water Dreaming that runs through Kalipimpinpa, north-west of Papunya.

Set of Art of the Desert gummed stamps

This set of stamps contains all four stamps from the Art of the Desert stamp issue. Art of the Desert stamp pack

The Art of the Desert stamp pack contains all four stamps from the stamp issue presented in high quality folder. This sheetlet contains 5 x $2.20 self-adhesive stamps from the Art of the Desert stamp issue. 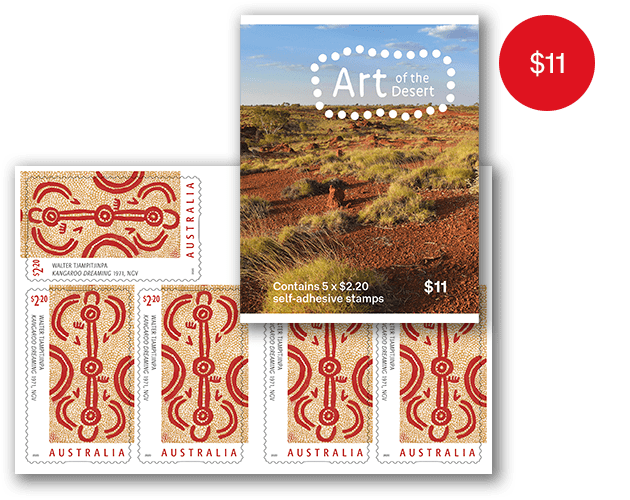 Set of Art of the Desert maxicards

This maxicard set contains the four maxicards from the Art of the Desert stamp issue.