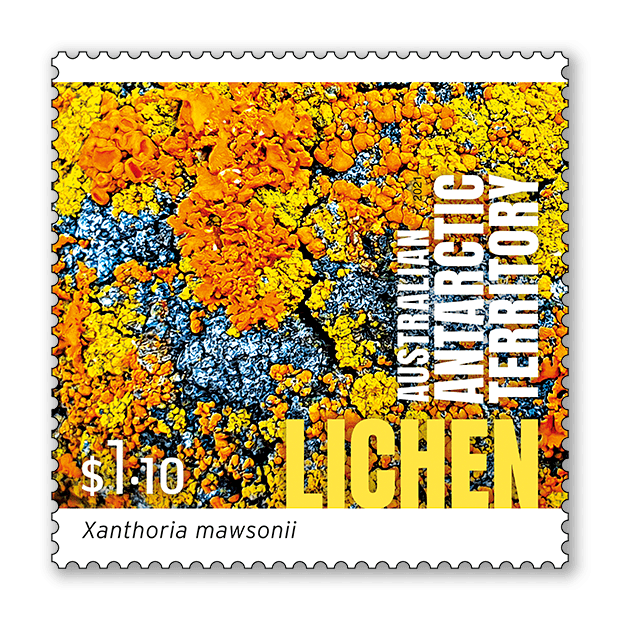 A lichen is a slow-growing, composite plant comprising a fungus with either a green alga or cyanobacteria. It forms through a symbiotic relationship between the two; the fungus takes advantage of the carbon made by the photosynthesising alga and the alga is protected by the fungus and benefits from its ability to extract minerals from rocks.

Lichens are some of the oldest living organisms on Earth and one of only four main types of plants that grow in harsh Antarctic conditions. They have very slow growth rates (in Antarctica, from around one centimetre or more per 100 years to as little as one centimetre per 1,000 years). Lichens also possess several adaptations that enable them to survive in extreme conditions: they can freeze dry to survive the dark winters, when temperatures are below -20 degrees Celsius; they can absorb water from snow or the tiniest of melted droplets; and they can begin to resurrect under a blanket of snow in spring.

Buellia frigida is a widespread, very tough crustose lichen. It is the most abundant lichen in the Australian Antarctic Territory (AAT). It grows as a flat mat, only 1mm or so in height, across rock surfaces in an ever-expanding circle. When one lichen collides with another, they merge to form an undulating edge. Wind pruning and desiccation curtails the growth of Bullelia frigida, so that it’s the most commonly found on the leeward, shady side of rocks, often facing south. The stamp photograph is by Peter Hargreaves, via the Australian Antarctic Division.

The lichen Xanthoria mawsonii grows in the coastal regions of Antarctic and is very visible due to its bright orange-red colour. It grows on rocks in exposed conditions and, over time, slowly biodegrades these rocks into soil. Xanthoria species are usually associated with bird colonies as they rely on bird faeces for nutrients. Xanthoria mawsonii is reported to be one of the most photosynthetically productive lichen species. It needs moisture to photosynthesise which it gets from spring snow melt, but it can also absorb water vapour from the air. It can photosynthesise at very cold below zero temperatures and can endure rapid freezing to very low temperatures. On the stamp, this species appears with the yellow lichen, Caloplaca citrina. The stamp photograph is by Patti Virtue.

Umbilicaria decussata, being foliose, is one of the tallest lichens in the AAT, growing up to 10 millimetres in height. It looks and feels like grey-black cornflakes stuck to rocks. It is highly susceptible to human disturbance, as a misplace footstep can easily break off the leaf-like structures. It's often found growing closely to Buellia frigida, but in the more sheltered part of a rock jumble. Its structure allows for entrapment of soil, dust and guano particles which are accessed to aid growth. The stamp photograph is by Dana M Bergstrom.

Xanthoria elegans is known as the elegant sunburst lichen because of its yellow orange colour, while its lower surface is white. It too grows on rocks near bird colonies where it relies on nutrients from bird faeces. It has fruiting structures on the surface that come in various shades – from orange-yellow to dark orange-red, depending on the moisture level of the surrounding area. These very bright carotenoid pigments in Xanthoria species are important in protecting them from the intense UV radiation in polar regions in the summer. Xanthoria elegans also grows in the Arctic and alpine regions of all continents, except Australia. The stamp photograph is by Patti Virtue.

This set of stamps contains all four stamps from the AAT: Lichen stamp issue. 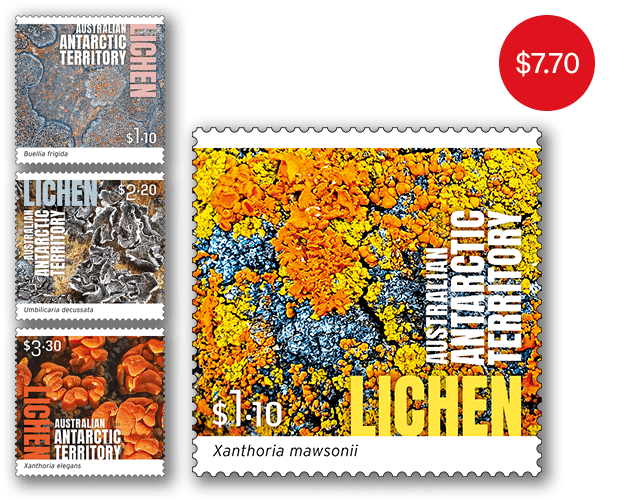 The AAT: Lichen stamp pack contains all four stamps and minisheet from the stamp issue presented in high quality folder. 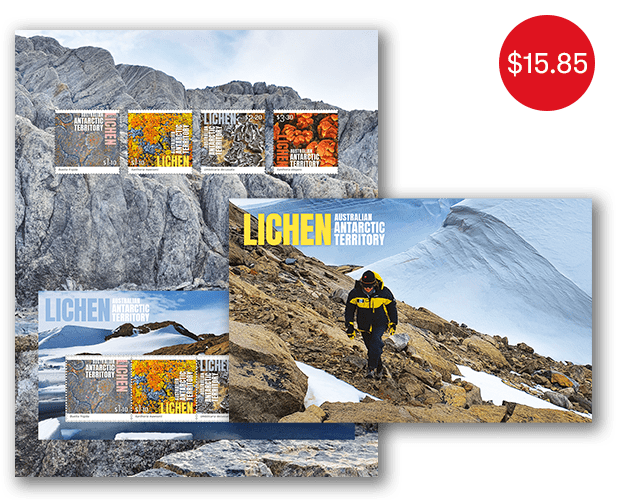 The AAT: Lichen minisheet consists of the four stamps from the issue incorporated into a miniature stamp sheet. 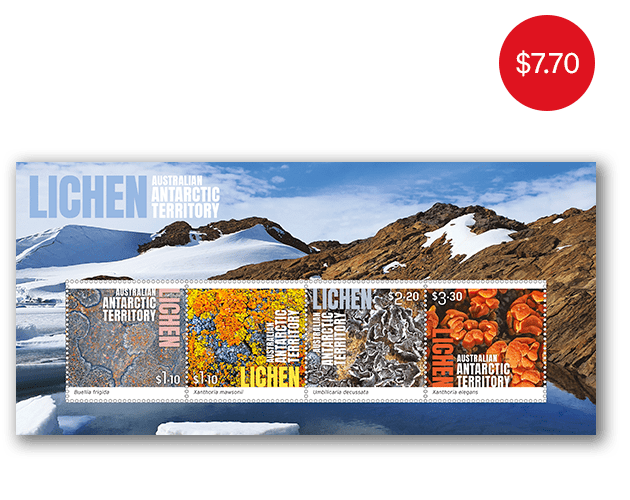 This maxicard set contains the four maxicards from the AAT: Lichen stamp issue. 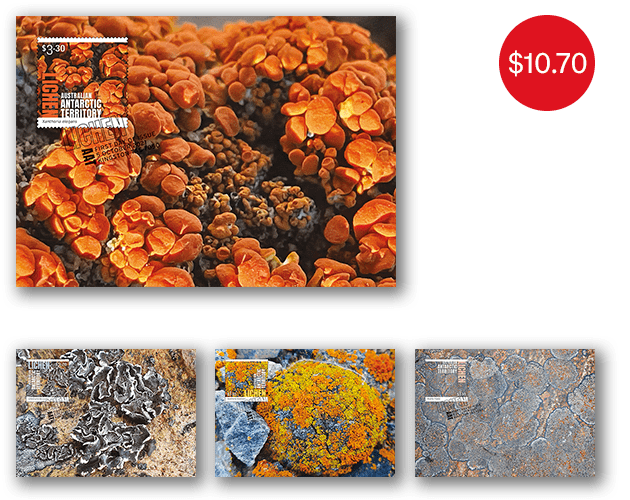