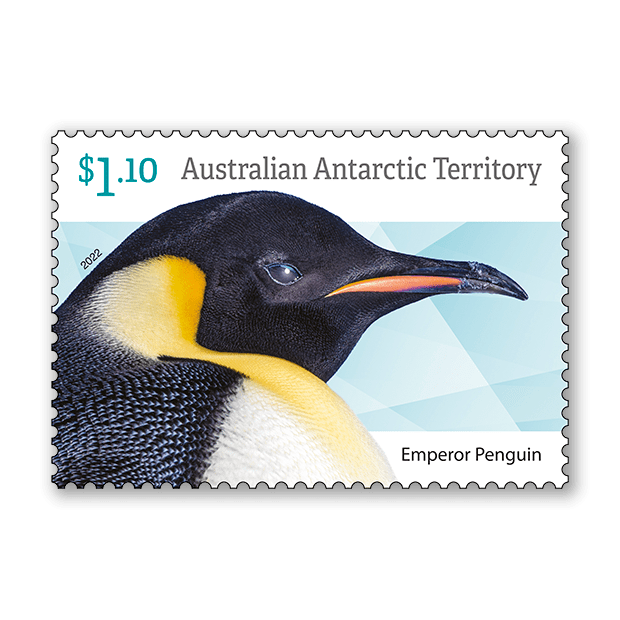 All the world’s 18 penguin species live in the Southern Hemisphere, with two that live and breed in the Australian Antarctic Territory (AAT): the medium-sized Adélie Penguin (Pygoscelis adeliae) and the largest and tallest of all penguin species, the Emperor Penguin (Aptenodytes forsteri).

Both Adélie and Emperor Penguins can swim several hundreds of kilometres from their colonies in search of food. Like all penguin species, penguins of the AAT catch their prey by pursuit-diving, using their flippers to “fly” through the water.

This stamp issue presents striking close-up and group photographs of each species.

The largest and tallest of all penguin species, the Emperor Penguin can weigh up to 40 kilograms. They are adapted to the extreme cold and wind, with several layers of feathers, large reserves of fat and small beaks and flippers to minimise heat loss. Up to several hundred birds huddle together for warmth, taking turns to occupy the warmest and coldest positions.

This stamp photograph is by Klein & Hubert, via naturepl.com.

Emperor Penguins typically breed on fast-ice near the coastline and are the only penguins to breed in the Antarctic winter. One egg is laid in May or early June. The female gently transfers it to the feet of the male before heading out to sea to fish, leaving the father to incubate the egg, without eating, for around 65 days.

This stamp photograph is by Sue Flood, via naturepl.com.

The Adélie Penguin weighs from three to six kilograms and measures around 70 centimetres from the tip of the beak to the tip of the tail, has a white ring surrounding the eye.

This stamp photograph is by Oliver Smart, via Alamy Stock Photo.

Adélie Penguins breed annually between October and February at ice-free sites around the coastline, including near Mawson station in the AAT. Two eggs are laid in a nest made of pebbles and are incubated in turn by both parents.

This stamp photograph is Wayne Lynch, All Canada Photos, via Alamy Stock Photo.

This set of stamps contains all four stamps from the AAT Penguins stamp issue. The AAT Penguins stamp pack contains all four stamps and minisheet from the stamp issue presented in a high-quality folder. 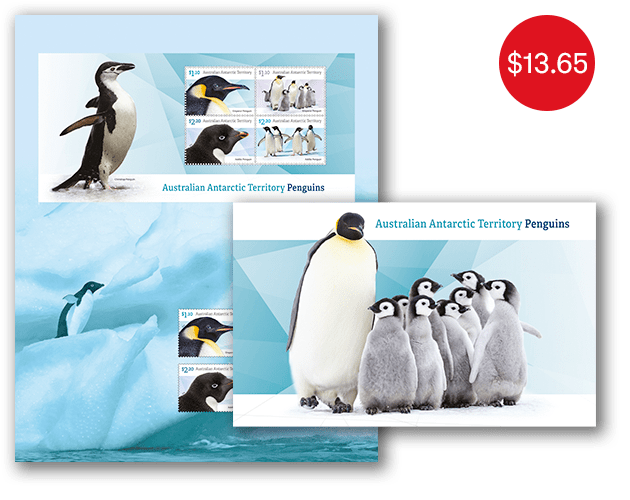 The AAT Penguins minisheet consists of the four stamps from the issue incorporated into a miniature stamp sheet.

This maxicard set contains the four maxicards from the AAT Penguins stamp issue.