The first Legends stamp was issued to honour cricketer Sir Donald Bradman AC, and in 2021 we’ve returned to this highly popular sport to recognise the Australian Legends of Cricket. Six of Australia’s greatest living cricket stars are being honoured for their significant contribution to the world of sport and the wider community: Allan Border AO, Adam Gilchrist AM, Jason Gillespie, Dennis Lillee AM MBE, Ellyse Perry and Ricky Ponting AO.

Born and raised in Sydney, Allan Border AO entered first-class cricket in 1977 and played his first Test match for Australia in 1978. He captained the Queensland team in 1983 and captained the Australian team the following year.

Border emerged as the uncompromising leader of a rejuvenated Australian team, leading them to win the 1987 World Cup competition and the 1989 Ashes Tour of England. Despite beginning the Ashes series as the clear underdog, the team famously won the series 4-0, heralding in a new era of Australian dominance and earning Border the 1989 Australian of the Year award. Playing a total of 156 Test matches, Border has been counted as the most prolific batsman and the highest run scorer in Australian Test cricket history, with a Test average of about 51 throughout his career and a total of 11,174 runs.

Adam Gilchrist AM was born in Bellingen and first played cricket at the age of seven. He went on to represent NSW and Australia at Under-19 level and made his first-class debut at the SCG in 1992 at the age of 21. In 1997 Gilchrist replaced Ian Healy in the Australian One Day side and two years later became Australia’s Test wicketkeeper for the next 96 consecutive Test matches until his retirement in January 2008.

Described as a once in a generation cricketer, Gilchrist’s accolades include being the 43rd Australian Test Cricket Captain, No. 1 ICC ranked batsman in the world in 2002, setting the 2008 world record for the most Test cricket wicketkeeping dismissals and being voted the greatest wicketkeeper/batsman of all time in 2010. Since retiring, Gilchrist has chaired the Australia Day Council, was appointed the first Australian Education Ambassador to India in 2014 and is currently patron of the Ronald McDonald House WA.

Jason Gillespie made his Test debut against the West Indies at Sydney in 1996, and his One Day International debut against Sri Lanka at Colombo in the Singer World Series the same year. Over his career, Gillespie played all three formats of cricket – Test, One Day and Twenty20 and is the nation’s only Indigenous male Test player. Gillespie primarily played as a right-arm fast bowler but was also a respected lower-order batsman, once scoring an unbeaten 201, the highest score by a night-watchman in the history of international cricket history.

Since his retirement in 2008, Gillespie has gone on to have an illustrious coaching career with teams in English county cricket and international cricket. He was the first team coach of Yorkshire for several years, winning two titles, and has coached teams in Zimbabwe, the Indian Premier League and Sussex. He is currently head coach of the South Australian men’s cricket teams.

Dennis Lillee AM MBE first played for Western Australia in 1969 and was subsequently picked for Australia in the sixth Test against England at Adelaide in 1971, where he took 5 for 84, confirming the emergence of a top-quality paceman. Lillee was the most accomplished and consistently hostile fast bowler of his time. At his peak no one was faster, more competitive, more menacing or resourceful.

Lillee's return to Test cricket, after being sidelined for 18 months with a career-threatening back injury, was the culmination of a rehabilitation program demanding the utmost in patience and perseverance. By his career's conclusion Lillee had claimed a world record 355 Test wickets and become an Australian sporting legend.

Ricky Ponting AO is a past captain of the Australian cricket team and one of the most decorated players in the history of the game. He retired in 2013 as Australia’s leading run scorer in both Test and ODI formats, has won more Test and ODI cricket matches, both as player and captain, than any other Australian cricketer. Ponting is second only to Sachin Tendulkar in total runs scored in Test match cricket. Since retiring from playing international cricket, Ponting has become a highly sought-after commentator and specialist coach, with his insights further reinforcing his status as one of the greatest tacticians in world cricket.

Together with his wife Rianna, Ricky Ponting also devotes significant time to the Ponting Foundation – a charity that helps young Australians and their families beat cancer.

This set of stamps contains all six stamps from the Australian Legends of Cricket stamp issue. The Australian Legends of Cricket stamp pack contains all six stamps from the stamp issue presented in high quality folder. 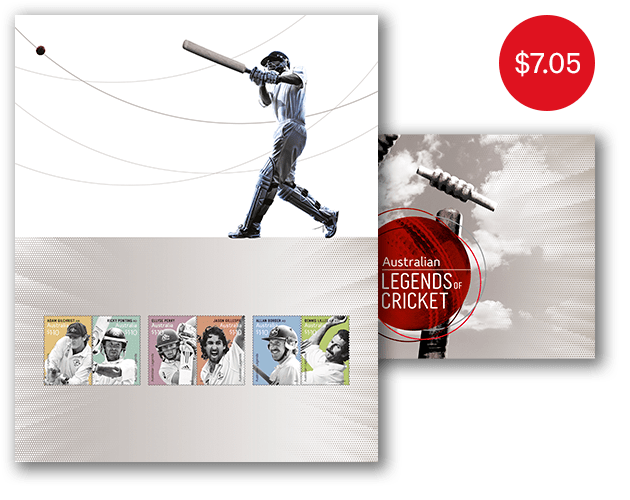 This maxicard set contains the six maxicards from the Australian Legends of Cricket stamp issue. 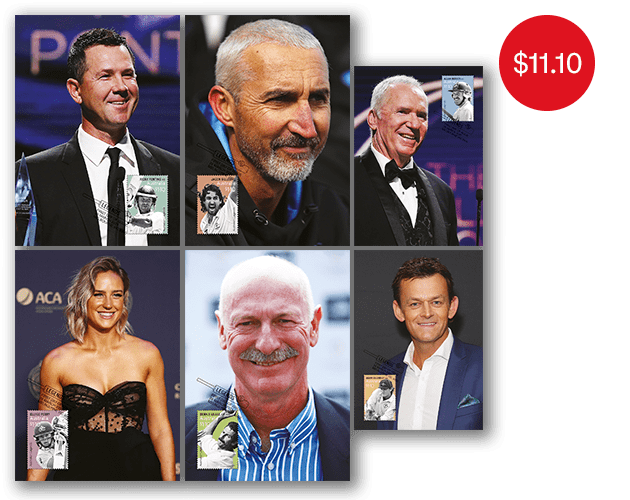