The Australia Post Australian Legends Award is presented annually to honour a living individual or group of individuals who have excelled in a particular field of endeavour. The award recognises outstanding individuals for their part in shaping the social and cultural life of Australia. In recognition of the honour, each recipient is depicted on a postage stamp and is presented with a 24-carat-gold replica of the stamp on which they appear.

The five Australian Legends of Filmmaking were selected based on factors such as longevity; prominence; critical, industry and public acclaim; awards won; and a noteworthy list of impactful films, including Australian stories. They also represent a diversity of styles and perspectives.

My Brilliant Career (1979), directed by Gillian Armstrong AM (b. 1950), was the first Australian feature film to be directed by a woman for 46 years. Its significant success was a launching pad for Armstrong’s impressive and award-winning body of work, comprising 20 films during a 40-plus year career. Gillian Armstrong has been commended as an advocate for women in film and was the first president of the Australian Director’s Guild.

The stamp photograph is by Tim Bauer.

Baz Luhrmann (b. 1962) burst onto the film-making scene with his award-winning Red Curtain trilogy: Strictly Ballroom (1992); Romeo + Juliet (1996); and Moulin Rouge! (2001). He is known for creating colourful and lavish cinema experiences that are well received by audiences and garner many accolades – a testament to the impact of his unique cinematic vision. Luhrmann’s forthcoming film is centred on the life of Elvis Presley.

The stamp photograph is by Travis Mitchell.

George Miller AO (b. 1945) is an icon of the film industry, with a career that so far spans 50 years. Miller’s Mad Max films (beginning in 1979 and with a new instalment currently under consideration) are hailed as some of the greatest action movies of all time. Miller earned an Academy Award for best animated feature film for Happy Feet (2006) and has been nominated for five other Academy Awards, amongst more than 75 forms of national and international recognition. His latest film, Three Thousand Years of Longing, is to be released in 2022.

The stamp photograph is by James Brickwood.

Warwick Thornton (b. 1970) is a Kaytetye man from Alice Springs whose powerful films (shorts, documentaries and features) highlight Indigenous issues, perspectives and experiences. Thornton is best known for feature films Samson & Delilah (2009) and Sweet Country (2017), the former winning the Caméra d'Or at the Cannes Film Festival, making Thornton one of only a handful of Australian directors to succeed at this prestigious event.

The stamp photograph is by Don Arnold.

Peter Weir AM (b. 1944) has around 60 awards and nominations to his name, including six Academy Award nominations. Weir was a leading figure in the Australian New Wave cinema movement of the 1970s, making his presence known with pivotal Australian films such Picnic at Hanging Rock (1975) and Gallipoli (1981), before going on to create major works such as Dead Poet’s Society (1989), The Truman Show (1998) and Master and Commander (2003), which cemented his reputation as the consummate storyteller.

The stamp photograph is also by Don Arnold.

This set of stamps contains all five stamps from the Australian Legends of Filmmaking stamp issue. 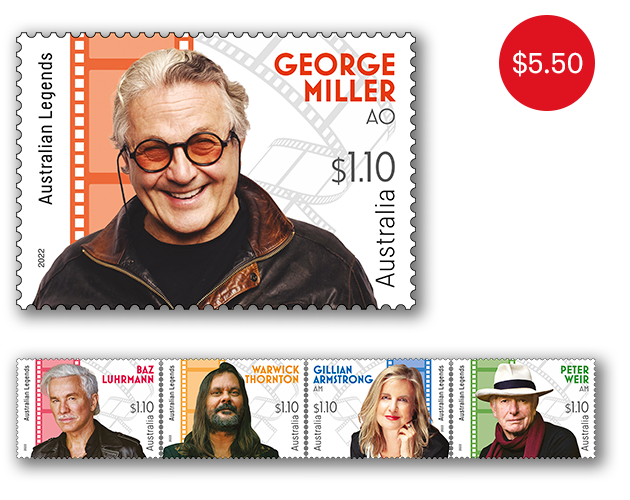 The Australian Legends of Filmmaking stamp pack contains all five stamps from the stamp issue presented in ahigh-quality folder. 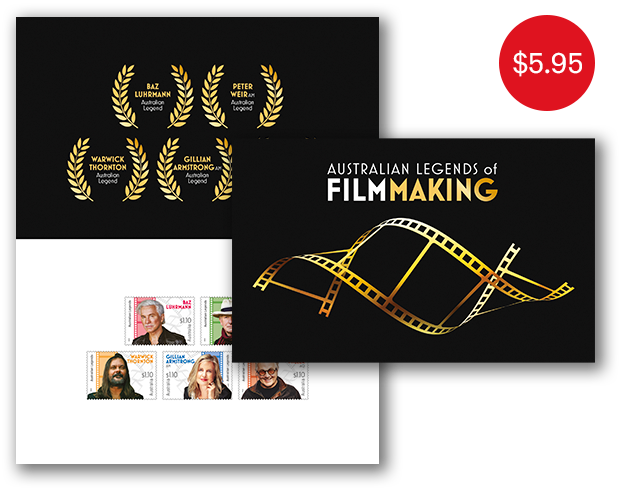 This maxicard set contains the five maxicards from the Australian Legends of Filmmaking stamp issue. 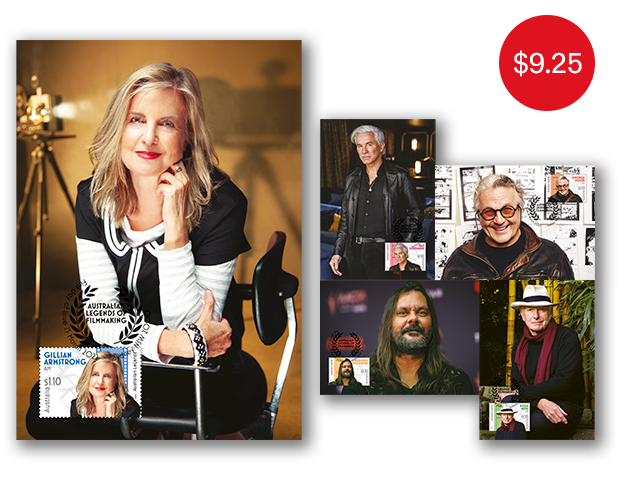 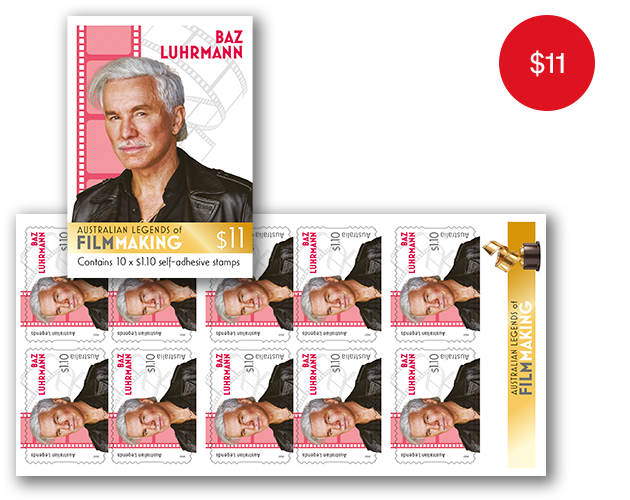