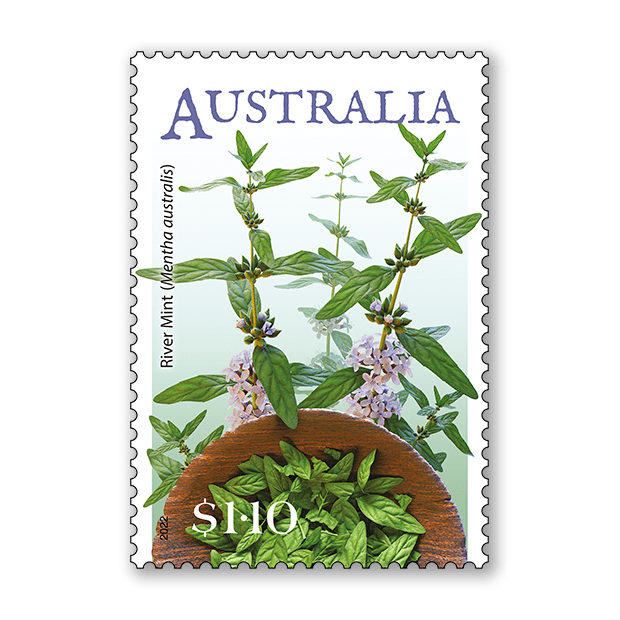 The stamps in the minisheet are presented in a tête-bêche format (a French term meaning in a pair, top to toe).

Aboriginal and Torres Strait Islander peoples have a long history of using native Australian flora, not only as bush foods but also as medicinal remedies, for building materials and as part of cultural ceremonies. Some native plants are considered so culturally and spiritually important to Aboriginal and Torres Strait Islander peoples that they are the subject of traditional laws, which are passed down through oral traditions such as epics, plays and stories.

Today, bush herbs and spices are increasingly used in home and commercial cooking as well as in natural medicines, beauty products and even perfumes.

A great variety of tools and utensils have traditionally been used by Aboriginal peoples to gather plants for food, fibres and medicine, including rounded wooden or softened-bark vessels, such as the coolamon, some incorporating a sharpened end for digging. Grinding stones have also been used to grind dried herbs (in the same way as a mortar and pestle). Such devices are alluded to in the Bush Seasonings stamp designs.

River Mint (Mentha australis) is a small perennial herb with scented leaves and small white or lilac flowers. Used in the same way as introduced, cultivated mints, River Mint, as its name suggests, is found along rivers and near waterways across much of eastern Australia. It has a flavour similar to spearmint and also possesses antiseptic properties.

Mountain Pepper is dioecious, in that male and female flowers are borne on different plants, with only the female plants carrying fruit (pepper berries). The berries start off dark red and turn black upon ripening, which occurs in autumn to early winter. Pepper berries are often dried and then crumbled or ground for use as a spice in both sweet and savoury dishes. Upon tasting, the berries transform from sweet to very hot (hotter than conventional peppercorns). Mountain Pepper essential oil contains high levels of antioxidants and has antibacterial qualities.

Lemon Myrtle (Backhousia citriodora) is a shrub or small tree that occurs naturally in the wetter coastal areas of southern Queensland. It can grow up to 20 metres high, with pinkish stems that bear soft, glossy green leaves. The clusters of cream-coloured, feathery flowers occur in autumn. Used fresh, the Lemon Myrtle leaf has a strong and refreshing citrus flavour. The leaves are said to contain the highest amount of the chemical compound citral of any plant.

This set of stamps contains all three stamps from the Bush Seasonings stamp issue. 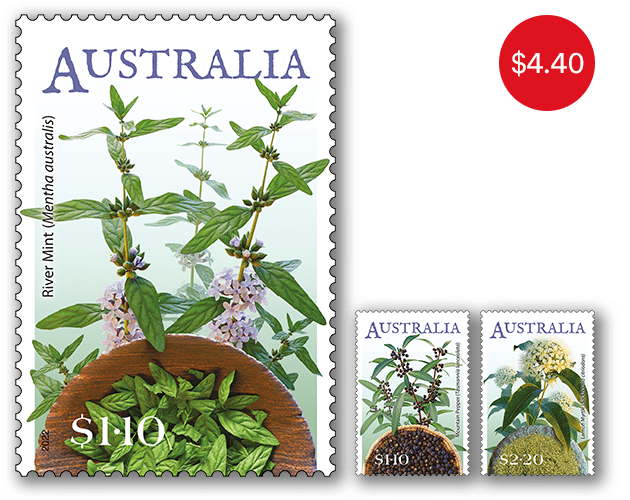 The Bush Seasonings stamp pack contains all three stamps and minisheet from the stamp issue presented in a high-quality folder. The Bush Seasonings minisheet consists of the three stamps from the issue incorporated into a miniature stamp sheet. 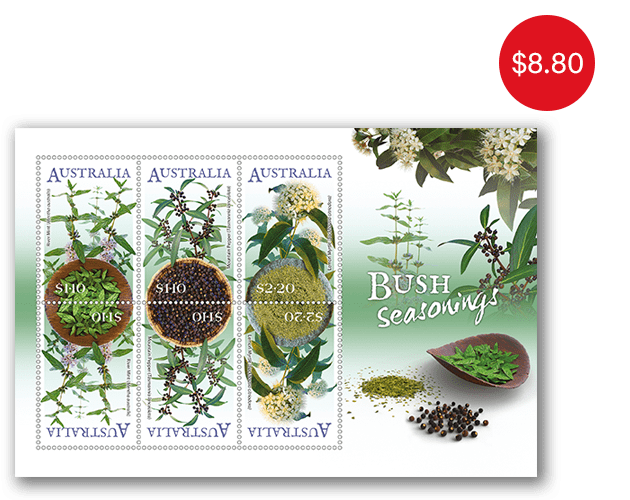 This maxicard set contains the three maxicards from the Bush Seasonings stamp issue. 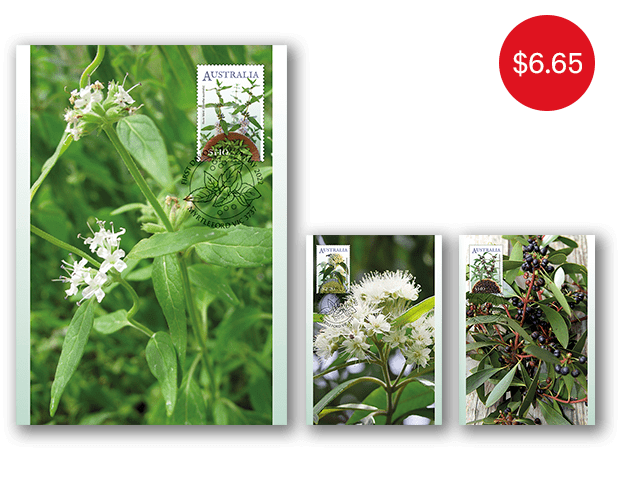