Football is considered the most popular sport on a global scale, played by an estimated 250 million players in more than 200 countries. That enthusiasm extends to Australia too, with various participation studies listing football as our number one club-based team sport.

The inaugural Australian men’s national football team took the field in 1922 in New Zealand, following a tour invitation from New Zealand’s peak football body. Fourteen games were played, including three friendly internationals or “Tests”. The first of these took place in Dunedin on 17 June 1922.

The two stamps in this issue honour all those who have donned the national uniform, showcasing a progression from this first national team to the team of the current day, known since the 1970s as the Socceroos. The Socceroos recently qualified for the 2022 FIFA World Cup, which will be held in Qatar during late November and early December – a fitting way to conclude the team’s centenary year. Learn about the history of the Socceroos.

This stamp design features a photograph of the inaugural Australian national team, taken in 1922, by Tyree Studios. The photograph is from the collection of Nelson Provincial Museum, New Zealand. The photograph has been colourised (with permission) to showcase the light blue and maroon playing strip, which incorporated the playing colours of New Zealand and Queensland, the states from which the players of this first team were selected. The playing shirt pocket emblem, which has been recreated for the stamp, comprised a maroon “A” and a golden fern leaf and kangaroo, to represent the two nations of the 1922 tour. It was worn until 1924, when green and gold, and the coat of arms, were incorporated into the uniform.

The name “Socceroos” was the product of an advertising campaign by the Australian Soccer Federation in 1972 and was first used when Dundee United toured Australia. By 1974, the name was in regular use. The logo for the 1974 World Cup campaign consisted of a kangaroo wearing football boots surrounded by “World Cup 1974 Socceroo”. This stamp shows several current Socceroos team members in action, to showcase the vitality and movement of the sport. The design features colours from the Socceroos’ official palette and a retail version of the current pocket emblem. The stamp photographs are by Noufal Ibrahim, courtesy of Football Australia.

This set of stamps contains the two stamps from the Centenary of the Men's National Football Team stamp issue. The Centenary of the Men's National Football Team stamp pack contains all two stamps and minisheet from the stamp issue. 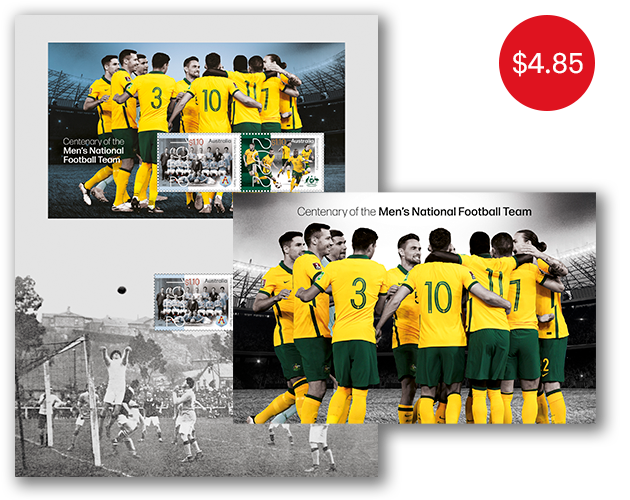 The Centenary of the Men's National Football Team minisheet consists of the two stamps from the issue incorporated into a miniature stamp sheet. 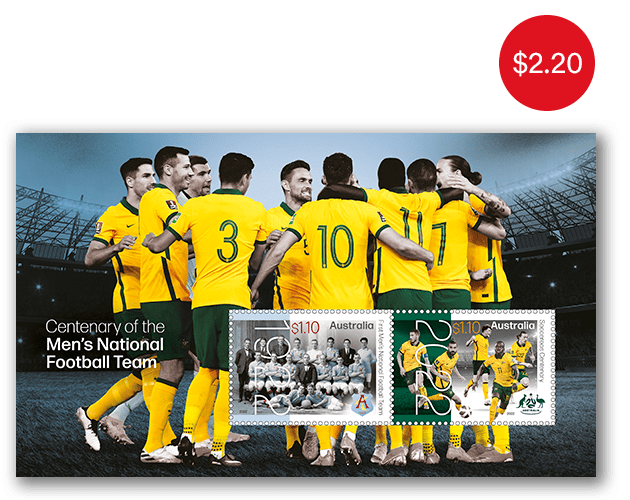 Set of Centenary of the Men's National Football Team Maxicards

This maxicard set contains the two maxicards from the Centenary of the Men's National Football Team stamp issue. 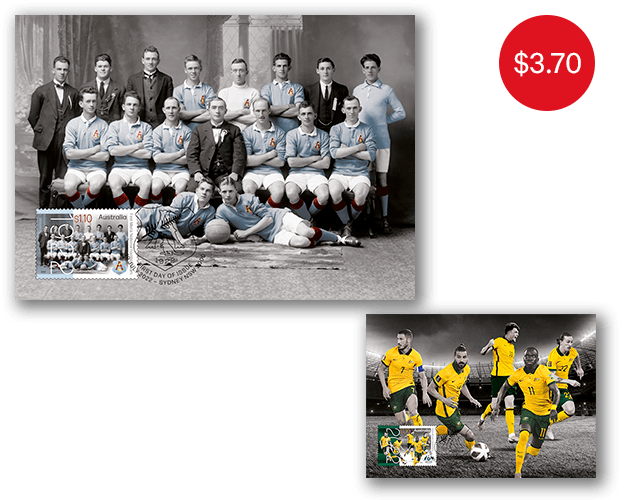