Sport is valued highly in Australian culture, both by participants and spectators. The athletes and those who cheer them on come together to create incredible sporting spectacles enjoyed by many, whether at the venue or via broadcast. The venues at which these spectator sporting battles play out are an important part of the passionate and often tribal atmosphere typical to spectator sport and can become an important part of a sporting club’s heritage.

These sporting venues are often also architecturally important in their own right, shaping a city’s identity and contributing to its economic fortunes and international reputation. These days, sporting venues can also be multi-functional, hosting large music concerts and other cultural events.

This stamp issue features four major sporting stadiums from across the country, including what is considered by many as one of the greatest examples, the Melbourne Cricket Ground (MCG), fondly known as “the ’G”.

AAMI Park was welcomed to Melbourne & Olympic Parks’ precinct in May 2010, giving Victoria its first world-class pitch for elite-level rugby league, rugby union and football (soccer) codes. It is one in the suite of venues across the internationally renowned precinct, which together deliver an array of sporting and entertainment events to more than 2.5 million visitors annually. The stadium is home to several sporting teams, including the Melbourne Storm, Melbourne Rebels, Melbourne Victory and Melbourne Football Club. The award-winning 30,050-seat stadium is defined by its distinctive bio-frame design, the roof of which provides covered seating for most of a capacity crowd enjoying the spectacle on the 136 x 82 metre playing field below.

The stamp photograph is by Ethan Rohloff.

State-government-owned Optus Stadium was opened on Burswood Peninsula, Perth, in January 2018, and in its first 12 months of operation attracted more than 1.7 million fans. Located alongside the picturesque Swan River, the stadium, with its striking bronze facade, reflects Western Australia’s unique geology and is surrounded by landscaped parklands inspired by the Indigenous six seasons. The new 60,000-seat stadium is the third largest in Australia (after Melbourne’s MCG and Sydney’s Stadium Australia), with a roof that provides coverage for 85 per cent of its permanent seating. It is capable of hosting AFL, rugby union, rugby league, football (soccer) and cricket, as well as large entertainment events. From fence to fence the pitch covers 177 x 141 metres, with 165 x 130 metres for the AFL field of play, and the venue contains two of the largest viewing screens in the Southern Hemisphere.

The stamp photograph is courtesy of Optus Stadium.

Located at Moore Park, on the edge of the CBD, the Sydney Cricket Ground (SCG) has a long and venerable history, the roots of which stretch back to the mid-19th century. The first recorded game of cricket was played on the site (then known as the Garrison Ground) in 1854, and all major cricket matches have been since 1876, although the ground’s current name was not adopted until 1894. The magnificent two-level Members Pavilion (shown in the stamp design) was built in 1886 (extended in 1903), and the equally elegant Ladies Pavilion a decade later, in 1896, both of which are heritage listed. Today, the SCG, which is known as a spin-friendly ground, is used for Test, One Day International and Twenty20 cricket. But it also regularly hosts AFL, rugby league and union, and football (soccer) on its 155 x 136-metre arena.

The stamp photograph is by Hamilton Lund, courtesy of Sydney Cricket Ground.

Originally built in 1853, the MCG has a rich sporting history, including being the main venue for the first Olympic Games held in the Southern Hemisphere, in 1956, a centrepiece for the 2006 Commonwealth Games and host to two cricket World Cups, in 1992 and 2015. Such is its place in sporting history that it is listed on both state and federal heritage registers for its significance. The MCG is primarily a ground for AFL and cricket, with the annual Boxing Day Test matches being among its most popular events, though at times it hosts other football codes too. Over its life, the MCG has been redeveloped several times and it can now hold a capacity crowd of 100,024, with seating for 95,000.

The stamp photograph is by John Gollings, via ArcaidImages.

This set of stamps contains all four gummed stamps from the Sports Stadiums stamp issue. 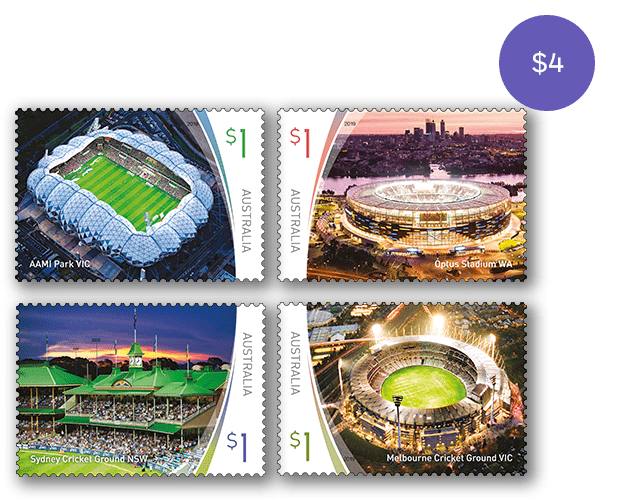 This maxicard set contains the four maxicards from the Sports Stadiums stamp issue.