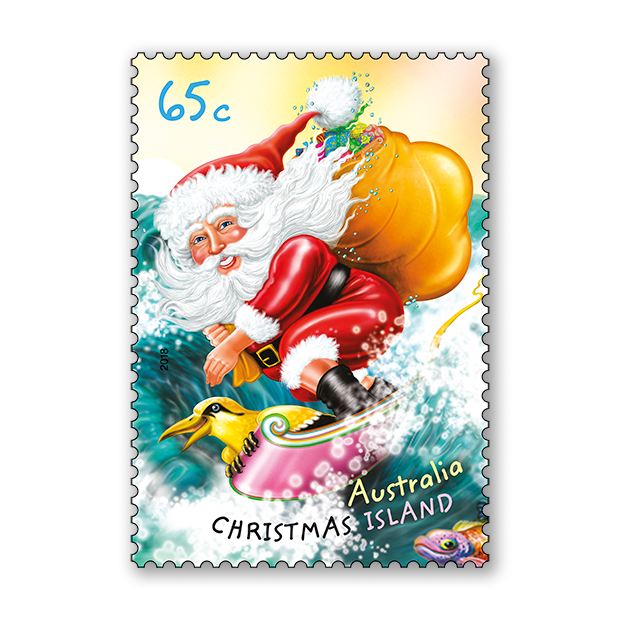 Located some 2,600 kilometres north-west of Perth, Christmas Island is the sole peak of an underwater mountain range that rises above the surface of the Indian Ocean. The island was named by Captain William Mynors, who sailed past it on Christmas Day 1643.

Australia Post has produced stamps for Christmas Island since 1993. While prior to 1993 the territory had issued Christmas stamps, Australia Post set a new direction for this annual issue, treating it in a more secular and light-hearted manner through the inclusion of Santa Claus and various personified local fauna engaging with the Christmas theme.

The two stamps in this issue are held together by Christmas season narrative. They depict a race between Santa and a Red-footed Booby, who speed towards the shores of Christmas Island. This narrative is extended through the minisheet, which shows a whole panoply of local characters: the Blue-tailed Skink, Red Crab, Green Turtle, Golden Bosunbird, Christmas Island Frigatebird, Emerald Dove, Christmas Island Hawk-Owl, Java Sparrow and a host of tropical fish.

Santa is hell-bent on getting his sack of gifts under the tree before expectant early-rising children emerge from beneath the covers on Christmas morning. In this nod to philatelic history – the Surfing Santa design of 1977 being one of Australia Post’s most controversial stamps – the smiling man in red carves up a wave on his sleigh, booty held over his shoulder above the sea spray.

But what are gifts without a tree under which to put them? The Red-footed Booby, a comical-looking bird at the best of times, was waylaid in decorating the tree and getting it to the island for Santa’s delivery. Keen to get any edge he can in the race against Santa, this clever bird uses the tree as a board sail in the race against time to install the tree ready to receive the gifts.