Located some 2,600 kilometres north-west of Perth, in the Indian Ocean, Christmas Island was named by Captain William Mynors, who sailed past it on Christmas Day 1643. The natural history of the island is of great importance. Christmas Island National Park, which comprises 85 square kilometres of the total landmass of 135 square kilometres, was declared in 1980. Unique vegetation and wildlife includes land crab populations of world significance.

This year’s issue, illustrated by Andrew McIntosh, shows Santa taking a well-earned break from delivering presents, to enjoy the wonderful snorkelling opportunities afforded by the island’s warm waters. Snorkelling is a popular pastime in reefs around the island, including at Flying Fish Cove, Dolly Beach, Ethel Beach, West Beach and Winifred Beach. Santa is also taking the time to chat with some local fauna, who have been eagerly awaiting his arrival.

This festive season, equipped with fins and mask, Santa is enjoying Christmas Island’s warm tropical waters, joined by one of the Green Turtles that famously nests on the island and frequents the waters around it.

This set of stamps contains the two stamps from the Christmas Island Christmas 2021 stamp issue. 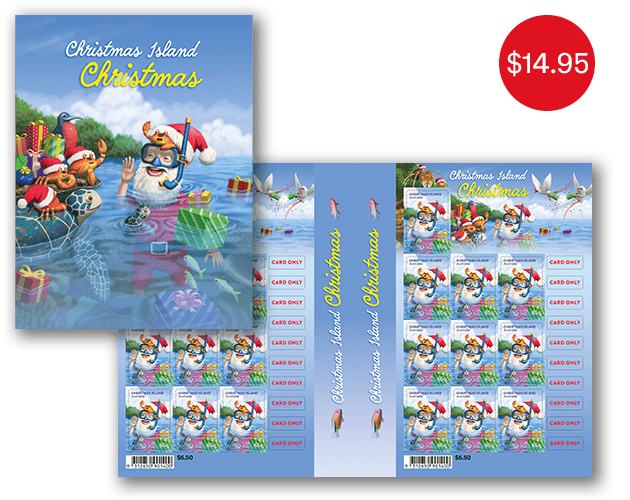 The Christmas Island Christmas 2021 minisheet consists of the two stamps from the issue incorporated into a miniature stamp sheet. *The on-sale date for international-rate Christmas stamps was 1 October 2021. This is to help ensure that our customers’ international Christmas mail reaches its intended destination on time, in light of the impacts of COVID-19 on worldwide mail delivery.