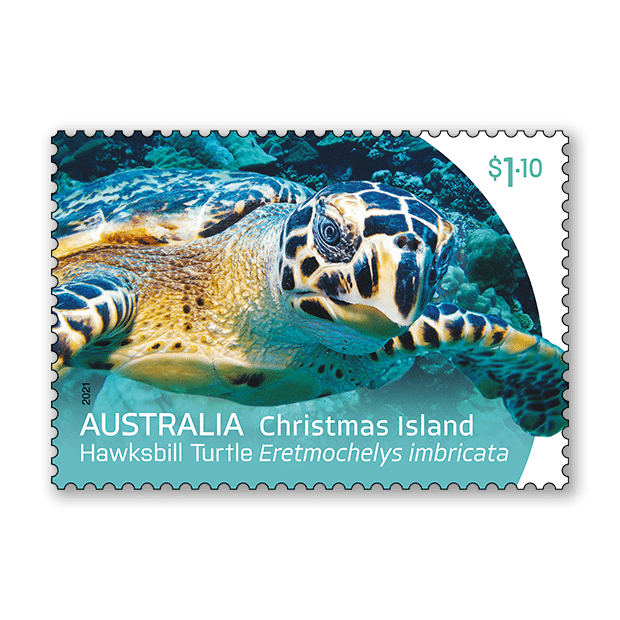 Marine turtles have a large shell called a carapace, four strong, paddle-like flippers and like all reptiles, lungs for breathing air. Their characteristic beak-like mouth is used to shear or crush food.

All seven species of marine turtle are endangered, including the two that frequent waters around Christmas Island: the large, herbivorous Green Turtle (Chelonia mydas) and the smaller, critically endangered Hawksbill Turtle (Eretochelys imbricata). Threats to turtles include pollution and habitat destruction, as well as over-harvesting and predation of eggs.

The Green Turtle is the only turtle to also nest on Christmas Island. However, a very significant percentage of hatchlings don’t survive their first few days of life. Christmas Island is especially prone to current-driven plastic and other beach debris that impedes the nesting and hatching of the Green Turtle.

This stamp design shows a close-up photograph by Karen Willshaw of the Hawksbill Turtle. This turtle uses its distinctive curved beak to probe coral reefs for sponges and other soft-bodied animals such as sea anemones and jellyfish.

Found throughout the world’s tropical oceans, this critically endangered turtle’s shell was once exploited as the main global supply of decorative tortoiseshell. The photograph in this design is by Karen Willshaw.

$2.20 Green Turtle Chelonia mydas from above

The Green Turtle is found in seaweed-rich coral reefs and inshore seagrass pastures in tropical and subtropical areas of the Indo-Pacific region. Like all sea turtles, it is migratory, often travelling thousands of kilometres between feeding and nesting grounds, which include Christmas Island. The stamp photograph is by Yvonne McKenzie, Wondrous World Images.

Green Turtles nest on Christmas Island throughout the year on Dolly and Greta beaches, laying clutches of 85 to 200 round white eggs, before covering them with sand and returning to the ocean. After 50 to 70 days, the young hatch during the night and instinctively clamber down to the sea; however, many do not survive. The stamp photograph in this design is by Yvonne McKenzie, Wondrous World Images.

This set of stamps contains all four stamps from the Christmas Island Turtles stamp issue. The Christmas Island Turtles minisheet consists of the four stamps from the issue incorporated into a miniature stamp sheet.