Christmas Island is remarkable for its unique natural environment and rich biodiversity, which includes one of the world's most abundant and diverse population of crabs.

There are around 160 species of crabs that inhabit the reefs and shallows of the island, as well as around 20 land crabs, including the world’s largest land crustacean, the Robber Crab. Land crabs evolved from their marine ancestors, scavenging for food on land but returning to the sea to spawn.

Crabs are arthropods, due to the presence of a hard, external skeleton and segmented body. They are part of the subphylum Crustacea, which means they possess two pairs of antennae. Crabs have five pairs of legs (the front pair has evolved into claws). As they grow, crabs shed their outer shell and grow a new one, a process known as moulting.

This stamp issue, illustrated by Anita Xhafer, presents four species of crab that are endemic to Christmas Island, each from a different genus.

The small endemic Bright-eyed Crab, named after Art Garfunkel’s song “Bright Eyes”, has a dark blue to purplish carapace and startling, bright yellow eyes. It lives in cracks and crevices in the seacliff and rocks within the spray zone around the coast.

Kuhl’s Ghost Crab is a medium-sized cream-coloured crab found across South-East Asia and infrequently sighted on the island’s Greta Beach.

The small vivid red to pink Red Nipper, which ranges throughout the Indo-West Pacific region, conceals itself in cliff crevices and overhangs around the coastline of Christmas Island.

The extremely rare, tree-living White-striped Crab is medium-sized with a yellowish-brown to purplish body and bright greenish-yellow eyes. The crab, which has been found on four Indian Ocean islands, was only identified as a new species in 2011.

This set of stamps contains all four stamps from the Christmas Island Crabs stamp issue. The Christmas Island Crabs minisheet consists of the four stamps from the issue incorporated into a miniature stamp sheet. 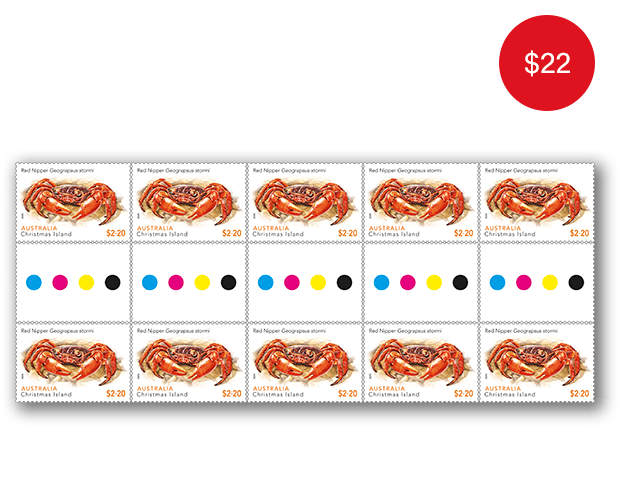