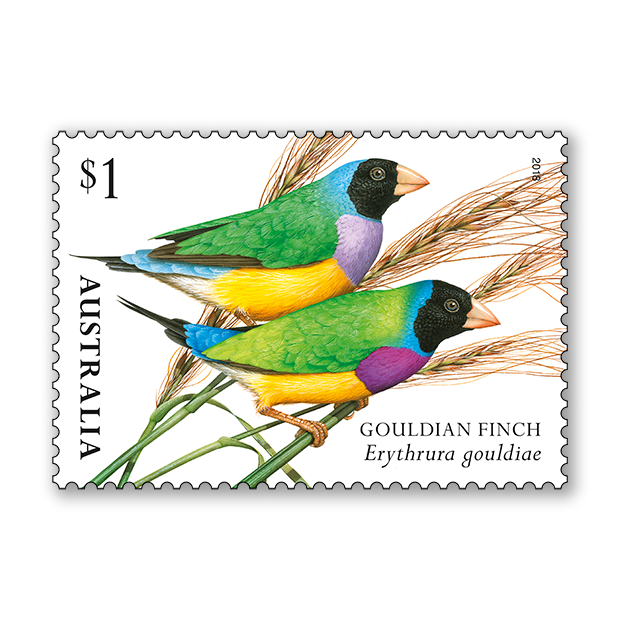 Finches are small birds, around 10 to 14 centimetres in length, with short conical beaks and plumage that varies in terms of both colour and pattern. Generally, the plumage of adult male and female birds is similar, but the plumage of female is a little duller than her counterpart. All excepting the aptly named Long-tailed Finch have fairly short tail feathers.

Finches are primarily grass-seed-eating birds that supplement their diet with insects. They are social birds, generally observed in small parties or larger flocks, and many species occupy fairly localised territory in Australia, particularly in the north and the east.

The stamp illustrations, by Adelaide-based wildlife artist Kevin Stead, focus closely on the birds, presenting them on a largely white background to highlight their distinctiveness and beauty. The habitat of each species is indicated through a suggestion of their preferred vegetation.

Take a look back at previous Australian bird-themed stamp issues, including others by Kevin Stead. The Gouldian Finch is often regarded the most beautiful of Australia’s finches. Ornithologist and publisher John Gould named it in memory of his wife, Elizabeth, a natural history artist who contributed greatly to Gould’s multi-volume publication on Australian birds.

The Gouldian Finch’s varied and brightly coloured plumage makes it popular as a caged bird and this, as well as the effects of grazing on its habitat, has led to its decline in the wild. Until recently it had been listed as “endangered”, though its status has been revised “near threatened”. The Gouldian Finch may be seen in flocks or small parties, and is distributed across tropical northern Australia, from Cape York in the east to the Kimberley in the west. The Beautiful Firetail is just that, with its stunning finely-barred plumage offset by a bright scarlet tail and scarlet beak. This species is restricted to the southern-most coastal areas of Australia, occurring through southern New South Wales and Victoria into south-east South Australia and throughout Tasmania; it is the only grass-finch to occur in the island state.

The Beautiful Firetail can be found in damp, grassy areas, gullies, lowlands, and in dense undergrowth near creeks and rivers. First described by John Gould in 1837, the expressive Black-throated Finch commonly occurs in flocks of up to around 30 birds. Its two subspecies (cincta and atropygialis) occur down Australia’s eastern seaboard, from the tip of Cape York to south of the Atherton Tablelands. The southern subspecies formerly occurred as far south as northern New South Wales.

The northern subspecies is black-rumped and the southern species white-rumped. It is a handsome little bird, with its blue-grey head and rufous to cinnamon under parts. Never far from water, the Black-throated Finch is most commonly observed in open woodlands, grass-covered pandanus flats and on scrubby plains, and rarely near settlements. Southern populations, generally south from the Tropic of Capricorn, have declined dramatically and their survival is at risk.