Approximately 340 species of pigeons and doves (family Columbidae, order Columbiformes) are distributed almost worldwide, with strongest representation in tropical and subtropical regions. In Australia they occur in most habitats, from the dense rainforests of north Queensland to the windswept heathlands of Tasmania. This issue depicts just four of the more than 20 species of pigeons and doves native to Australia.

The stamp illustrator is Australian artist William T Cooper AO (1934–2015), who was once described by Sir David Attenborough as the best ornithological illustrator alive. Cooper illustrated many books on birds, including the definitive publication Pigeons and Doves in Australia (CSIRO Publishing, 2015) with text by his longtime collaborator, renowned ornithologist Joseph M Forshaw AM. Cooper’s beautiful illustrations for this book are reproduced, with permission, for this stamp issue.

This large, arboreal pigeon, so named for its distinctive crest, is recovering from past excessive hunting and is again becoming common in coastal and subcoastal forests of eastern Australia, where its range expands south into eastern Victoria. The diet of this pigeon consists almost entirely of fruit, which varies throughout its range as fruit ripen at different times during the year.

Despite its brilliant plumage colouration, the arboreal Superb Fruit-dove remains well hidden amidst foliage, so is more often heard than seen in the rainforests of eastern Queensland and north-eastern New South Wales. This fruit-dove feeds primarily on fruits and berries.

This pigeon is becoming increasingly common in the same forests as the Topknot Pigeon. It is colonising open woodlands, farmlands and urban gardens. The White-headed Pigeon feeds on rain-forest fruit and seeds and has a special taste for the introduced Camphor Laurel.

Favouring drier inland woodlands and grasslands of north-eastern Australia, this ground-dwelling pigeon has disappeared from northern New South Wales and much of southern Queensland because of habitat loss and predation by cats and foxes. This pigeon feeds almost exclusively on seeds from grasses, herbs and shrubs, commonly foraging along the sides of roads.

This set of stamps contains all four stamps from the Doves and Pigeons stamp issue. The Doves and Pigeons stamp pack contains all four stamps and minisheet from the stamp issue. 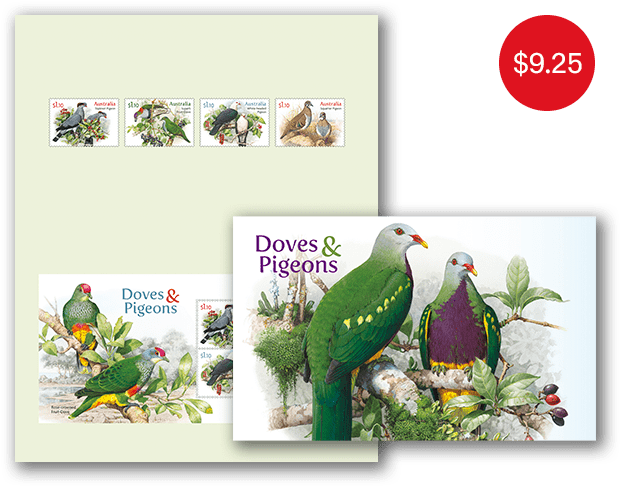 The Doves and Pigeons minisheet consists of the four stamps from the issue incorporated into a miniature stamp sheet. 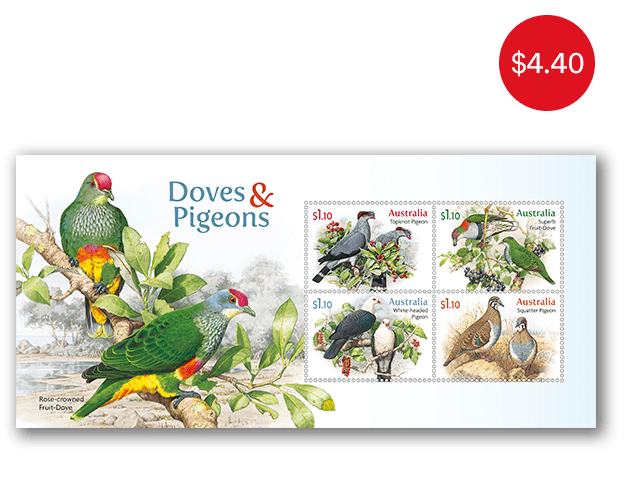 Set of Doves and Pigeons Maxicards

This maxicard set contains the four maxicards from the Doves and Pigeons stamp issue.