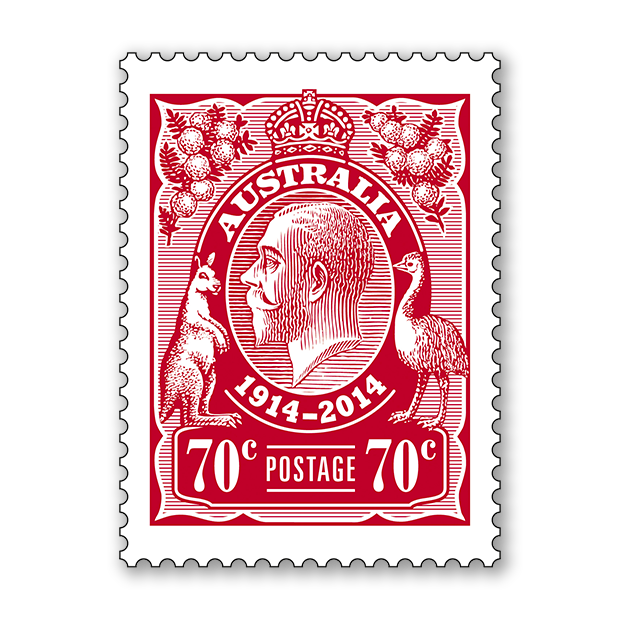 A century ago, Labor Postmaster-General Charles Frazer developed the Kangaroo and Map design as “an effective advertisement” for Australia. A few months later, his successor as Postmaster-General, the Liberal’s Agar Wynne, made plans to scrap the kangaroo in favour of stamps featuring the monarch, King George V.

Together with the King’s profile, the new stamp design also featured a kangaroo, emu, sprig of wattle and the crown. Addressing a meeting of the Australian Women’s National League in Melbourne, Agar Wynne was quoted in the press as saying the design “would make a very good stamp, being emblematic of Australia, and also of our loyalty to the empire”.

The George V stamp was a 1d denomination for basic letter postage within Australia and to British Empire countries. With a view to making the stamp look impressive it was decided to use intaglio. As the Stamp Printing Office in Melbourne had no suitable engraver to cut a letterpress die, an order was placed with London stamp printers, Perkins, Bacon & Co. The firm sub-contracted the actual engraving of the die to De La Rue, who was more experienced in letterpress stamp production.

The first release of the 1d letterpress George V stamp occurred at the Sydney and Melbourne general post offices on 17 July 1914. Production of the 1d Kangaroo and Map stamp now ceased. Agar Wynne had issued a King’s head stamp for 1d basic letter postage. The former Postmaster-General, Charles Frazer, did not live to see this threat to his beloved Kangaroo and Map stamps. He died of pneumonia on 25 November 1913, aged 33.

Three new George V stamps of ½d, 4d and 5d denominations, issued at intervals during 1915, but World War I had a considerable impact on stamp production. The supply of ink pigments from Germany was cut off and the substituted pigments were usually inferior. Consistency of colours could not be maintained and, in particular, the 1d George V stamp appeared in a striking range of red shades. Adjustments to postal rates and changes to Universal Postal Union (UPU) rules in relation to colours for international postage stamps meant that there were many changes in the decades that followed.

On 20 January 1936, King George V died and new stamps featuring his successor, King Edward VIII, would be needed. However, the new king reigned for less than a year before abdicating in favour of his brother, who became King George VI. By early 1937, the subjects of the George VI definitive stamp series had been selected. By late 1938, the last of the George V stamps had gone off sale. For nearly a quarter of a century the George V design had served for the basic letter postage stamp, and for many commonly used postal rates. During this period, a total of 11.8 billion George V stamps were produced.

The stamps are modified versions of the original 1914 stamp designs. The colours of red, burgundy, purple and green approximate the original colours.