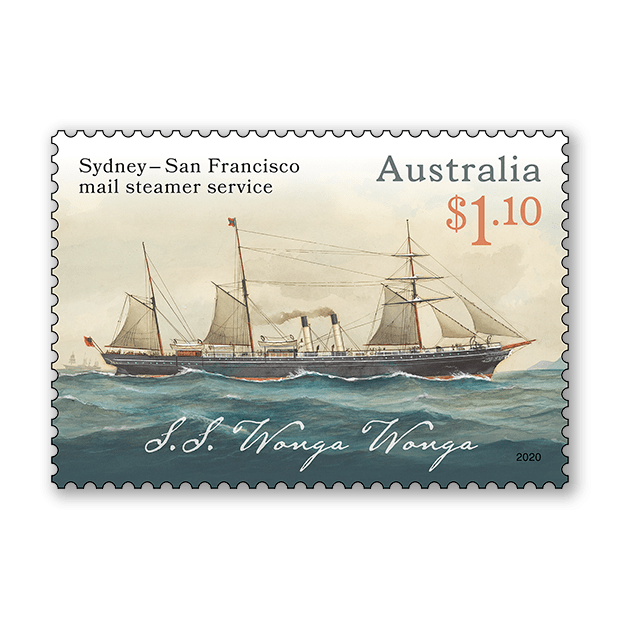 The stamp issue marks the 150th anniversary of the beginning of the Sydney to San Francisco mail steamer service. The Pacific route – made possible after the completion of the transcontinental American railway – offered a shorter alternative to the main route of passage between England and Australia, via Egypt and Sri Lanka (then Ceylon).

The first attempt at establishing a regular steamship service between Australia, New Zealand and the US west coast was made in 1870. For its first five years, the service was complex and changing, but the controversial, often-Sydney-based American agent, HH (Hayden Hezekiah) Hall, secured the initial contract for the service with the New Zealand government. After some pressure from New Zealand, the New South Wales colonial government agreed to provide a subsidy for the service, although only for 12 months.

Hall operated the monthly service via Hawaii for about a year. He ran two steamships on the route, chartering the SS Wonga Wonga and SS City of Melbourne from the Australasian Steam Navigation Co. The Wonga Wonga was the first to ply the route, departing Sydney for Honolulu via Auckland on 26 March 1870 and arriving at Honolulu on 19 April; the City of Melbourne began its voyage from Sydney on 27 April. During the first year of service, the steamships would travel as far as Honolulu, at which point passengers and cargo would be transferred to the US steamers Idaho and the Ajax, which continued on to San Francisco. The first vessel to complete the full route from Sydney to San Francisco was the City of Melbourne, which departed Sydney on 4 May 1871.

Read our interview with maritime expert Peter Plowman, to learn more about some intriguing elements of this story.

The stamp illustration is a watercolour on board of the SS Wonga Wonga by ship enthusiast and maritime painter (Charles) Dickson Gregory (1871–1947). Many of his paintings, including this one, are held in the collection of State Library Victoria.

The Wonga Wonga carried a large spread of canvas to catch the winds and help propel it across the long route, for which the coal-carrying capacity was limited. The ship could steam at around 10 knots, consuming around 28 tons of coal per day. 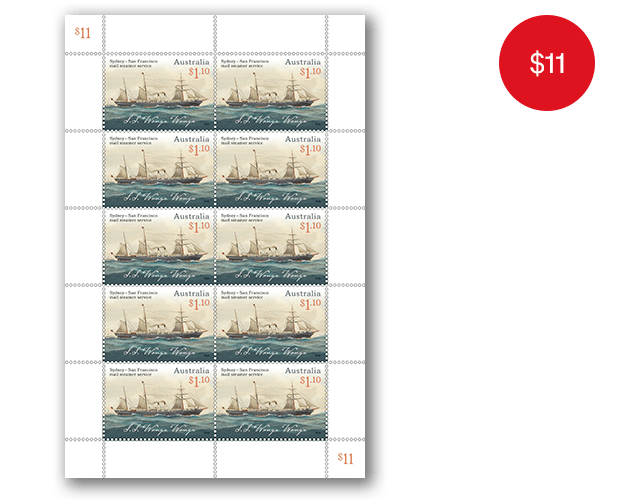 The Sydney-San Francisco Mail Steamer Service 150 Years maxicard is a prepaid postcard with the stamp affixed and postmarked on the view side. 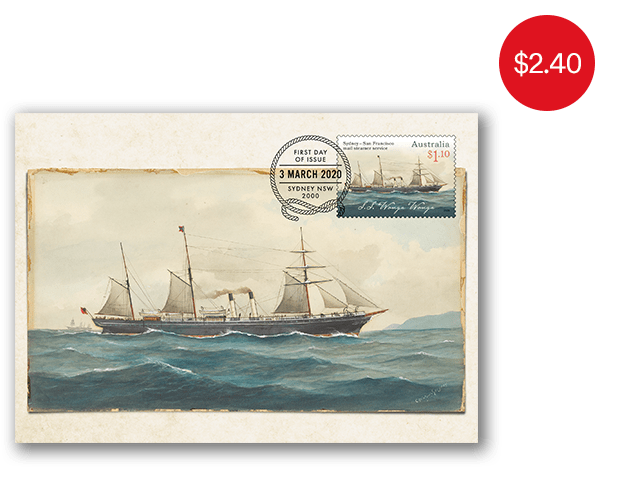