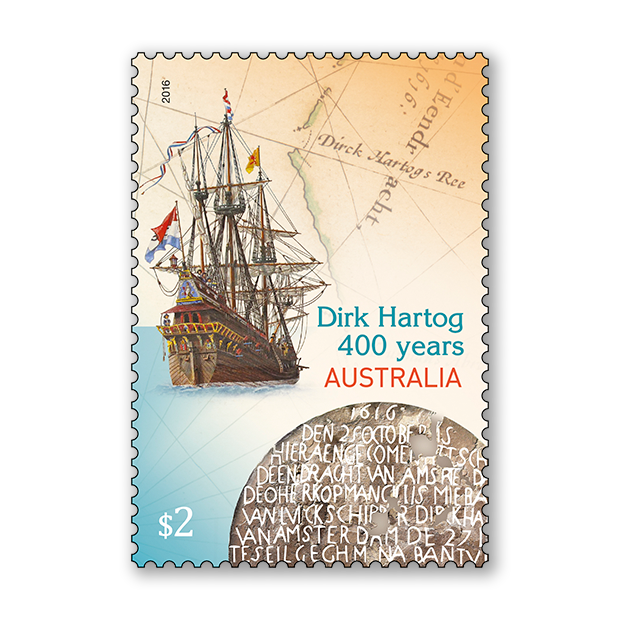 The story of Captain James Cook and his landing at Botany Bay in 1770 is a well-known event in Australian history. However, Cook was not the first European explorer to land here. There were many explorers who had already made landfall on the great southern continent during the 17th century, including several Dutch seamen from the Dutch East India Company (VOC).

The VOC held a monopoly over the lucrative spice trade with the East Indies (today known as Southeast Asia). They sent several expeditions to Australia (then known, among other terms, as “Unknown South Land”) to hunt for new trading opportunities. As a result, Dutch maps during the 17th century show an accumulation of knowledge of the area. By 1628, approximately 4,000 kilometres of Australia’s western, southern and northern coastlines had been surveyed and marked on charts used by the VOC.

One such trade expedition was that of the great Dutch explorer Captain Dirk Hartog (1580–1621) in 1616. After setting off from Holland, en route to Batavia in the Dutch East Indies, Hartog lost his way. On 25 October 1616, he made landfall at an island off the coast of Shark Bay, Western Australia. This made Hartog’s expedition the second recorded landing on Australian soil (after fellow Dutch explorer Williem Janszoon in 1606) and the first on the western coast.

Two days after his ‘accidental’ discovery, before leaving what is now called Dirk Hartog Island, Hartog left a pewter dish inscribed with an account of his visit fixed to a wooden post at a location now called Cape Inscription. The Eendracht then sailed north-east, charting the Western Australian coastline. Hartog called the area t’Landt van d’Eendracht, or Eendrachtsland. Hartog eventually arrived in Batavia on 14 December.

The stamp, designed by Sharon Rodziewicz, includes a painting of the Eendracht by Western Australian artist Adriaan de Jong. The painting is based on early 17th-century Dutch paintings and documents. The map on the stamp is from the 1618 Chart of the Malay Archipelago by Hessel Gerritsz. The image of the pewter dish is reproduced from the original now in the Rijksmuseum, Amsterdam. It is the oldest known artefact from Australia’s European history and the oldest physical record of a European landing in Australia.

An English translation of the Dutch inscription on the dish reads:

“1616 the 25 October is here arrived the ship Eendraght of Amsterdam the uppermerchant Gillis Miebais of Liege skipper Dirck Hatichs of Amsterdam. The 27 ditto (we) set sail for Bantum the undermerchant Jan Stins, the first mate Pieter Dookes van Bil. Anno 1616”