Fifty years ago, at 12.56 p.m. on 21 July 1969 (AEST), an estimated 600 million people worldwide watched American astronaut Neil Armstrong become the first person in history to step onto the surface of the Moon: a pivotal moment of the 20th century. As he alighted from lunar module Eagle, astronaut Neil Armstrong uttered the now immortal words, “That’s one small step for (a) man; one giant leap for mankind”.

Read more in our Commemorating the Moon Landing article. The Apollo 11 Lunar Module Eagle was the first crewed vehicle to land on the Moon, carrying astronauts Neil Armstrong and Buzz Aldrin. The module also carried the Early Apollo Scientific Experiment Package (EASEP), which consisted of several self-contained experiments to be deployed and left on the lunar surface, as well as scientific and sample collection apparatus. The Parkes radio telescope is situated just outside the town of Parkes, around 380 kilometres from Sydney, New South Wales. It's one of three instruments that make up the Australia Telescope National Facility. It commenced operation in 1961, and in 1969 it was a main receiving station for the Apollo 11 mission to the Moon. The telescope is now 10,000 times more sensitive than when it was commissioned. Once on the lunar surface, Neil Armstrong and Buzz Aldrin unveiled a plaque mounted on a strut behind the ladder of the Eagle and read the following inscription aloud: "Here men from the planet Earth first set foot on the Moon July 1969, A.D. We came in peace for all mankind." Honeysuckle Creek Tracking Station, just south of Canberra, ACT was established by NASA for the Apollo missions. It received signals from Apollo 11 as Neil Armstrong took his first steps on the lunar surface, and sent them to Houston, USA, for broadcast to the world. The tracking station was eventually demolished, but the site is now heritage listed.

This set of stamps contains all four stamps from the Moon Landing: 50 years stamp issue. 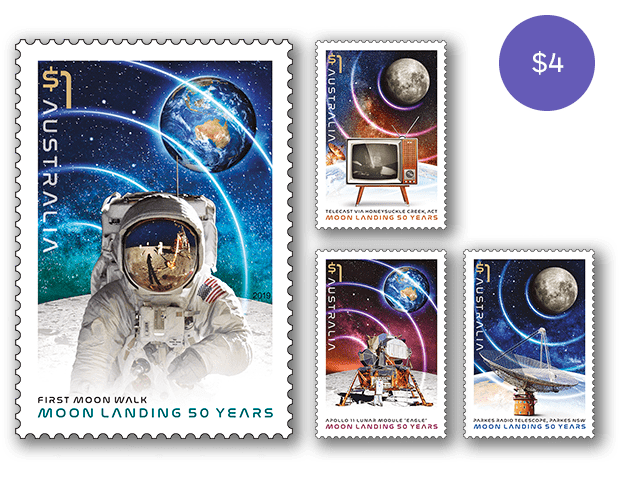 The Moon Landing: 50 years stamp pack contains all 4 stamps and minisheet from the stamp issue presented in high quality folder. 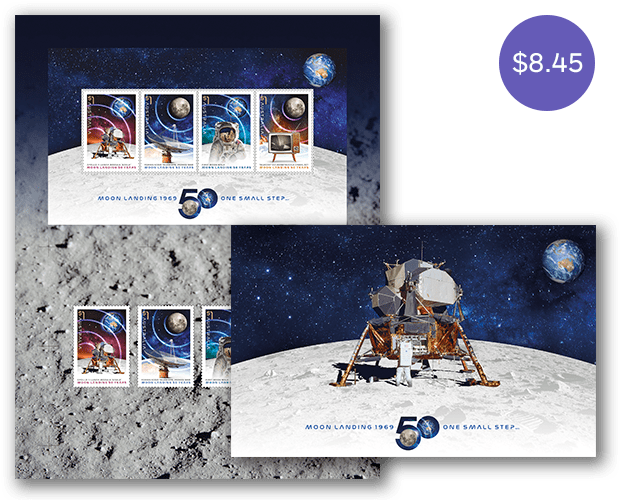 This maxicard set contains the 4 maxicards from the Moon Landing: 50 years stamp issue. The Moon Landing: 50 years minisheet consists of the four stamps from the issue incorporated into a miniature stamp sheet.