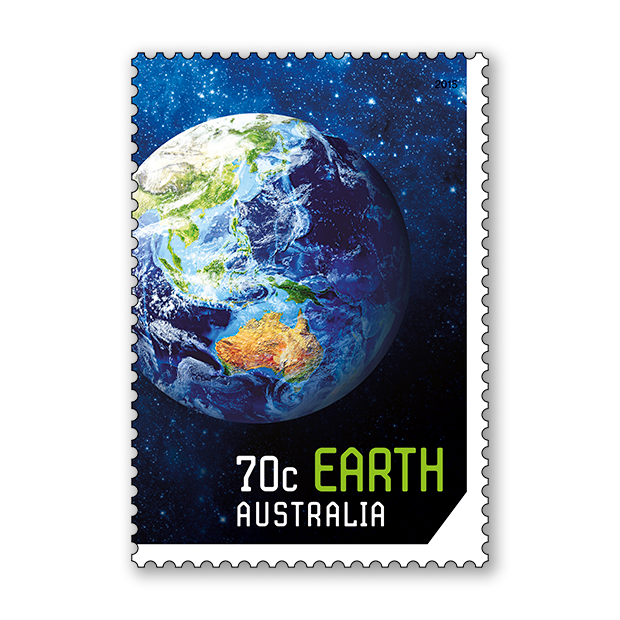 This year Australia Post celebrates its 2015 Stamp Collecting Month (SCM) with the launch of the ‘Our Solar System’ stamp collection.

The ‘Our Solar System’ stamps feature the eight spectacular planets that orbit our Sun. These celestial wonders of our solar system were formed about 4.6 billion years ago.

The stamp pack features unearthly illustrations of all eight of the fascinating planets of our solar system. These include the four inner-belt terrestrial planets Mercury, Venus, Earth and Mars and the larger outer-belt giants Jupiter, Saturn, Uranus and Neptune. Neptune’s stamp also features the dwarf planet Pluto.

As more and more exciting astronomical discoveries continue to take place, Australia Post hopes to help inspire both adults and children to explore and enhance their knowledge about our solar system with the new stamp collection.

Here are just a few snippets of information you may or may not have known about the planets of ‘Our Solar System’.

Our solar system is made up of eight major planets that orbit the Sun. These planets are divided into two groups: the small rocky planets of the inner solar system – Mercury, Venus, Earth and Mars – and the massive gas giants beyond the asteroid belt – Jupiter, Saturn, Uranus and Neptune.

In addition, there are dwarf planets, like Pluto, and countless numbers of smaller bodies, including asteroids and comets.

Closest to the Sun, Mercury is the smallest planet in our solar system (4,878 km in diameter). It has a heavy, mainly iron, core that is around 40% of the planet’s volume. As Mercury’s iron core cooled it contracted and shrank which caused the planet’s crust to wrinkle. Mercury has a unique, gravitationally-locked rotation.

It takes just 88 Earth days to orbit the Sun, but it rotates very slowly – a “day” on Mercury is 59 days long. For every two orbits of the Sun, it completes three rotations. It also has the largest temperature variation between day and night of any of the planets, with night time surface temperatures down to -173⁰C and daytime highs of 427⁰C.

Mercury has no appreciable atmosphere and its arid surface is scarred by countless impacts from asteroids, meteors and comets.

Hidden under a thick cloud like atmosphere, Venus is a world of crushing atmospheric pressure, high temperature and acid rain. Similar in size to Earth, with a diameter of 12,100 km, Venus is the hottest world in the solar system. Its thick carbon dioxide atmosphere traps heat like a greenhouse, and surface temperatures reach 462⁰C – hot enough to melt lead.

A “year” on Venus is 225 Earth days long, but the planet spins so slowly (and in the opposite direction to the spin of most of the other planets) that it takes 243 Earth days to complete one rotation, meaning that Venus’ day is longer than its year. Seen from Earth, Venus is the brightest object in the night sky apart from the Moon.

Earth is the largest of the “terrestrial”, or rocky, planets (12,742 km in diameter), and has the greatest density of any planet in the solar System. With its vast oceans and protective atmosphere, our home planet has proved just right for the development of life and is the only world in the universe where life is currently known to exist.

The atmosphere is composed mainly of nitrogen (78 per cent) and oxygen (21 per cent) and only allows a narrow slice of the electromagnetic spectrum (mostly visible light) to reach the surface, shielding us from harmful infrared, ultraviolet, X-rays and gamma-rays.

The Earth’s powerful magnetic field also protects us from bombardment by radiation from space. With surface temperatures ranging from -88 to 58°C, Earth is the only place in the solar system where water exists in all three forms –solid, liquid and gas. Our planet has one large moon, with a radius about one quarter of the Earth’s, making it the largest satellite compared to its parent planet.

Mars may once have been Earth-like, but has now lost its surface water and possesses only a very thin carbon dioxide atmosphere and a surface pressure less than one per cent that of Earth. Most of Mars’ atmosphere was either oxidised into its iron rich surface (forming the rusty red colour we see today) or lost to space over time due to Mars’ weak gravity. Orbiting spacecraft and rovers have provided considerable evidence there was once water flowing on the surface of Mars; water may even exist today, frozen as permafrost beneath the surface.

Mars has seasons, like the Earth, and polar caps composed of carbon dioxide ice and water ice. It boasts the largest volcano in the solar system, Olympus Mons, which is 25km tall (almost three times the height of Mt Everest) and one of the biggest canyon systems, the Valles Marineris, more than 4,000 km long. Microbial life may have evolved on Mars billions of years ago, when it was far more Earth-like; whether any microbial life still exists today is a matter for further exploration.

Mars has two tiny moons, Phobos and Diemos, which were discovered in 1877 and appear to be captured asteroids.

The largest planet in the solar system, Jupiter is a “gas giant” – a huge ball of hydrogen and helium gas with possibly a small rocky or icy core. With an equatorial diameter of 141,000 km, Jupiter is so massive that 1,000 Earths could fit inside it.

A day on Jupiter is just 10 hours long, but it takes 12 Earth years to circle the Sun. Jupiter has a ring system, consisting of four rings. It is also home to massive storms, one of the most recognisable is the Great Red Spot, a huge anticyclonic storm bigger than the Earth that has been raging for hundreds of years.

Sixty seven moons have so far been discovered around the planet. Its four largest moons, first seen by Galileo in 1610, are fascinating worlds in their own right. Ganymede is the largest moon in the Solar System and actually bigger than the planet Mercury.

Callisto, Jupiter’s second largest moon, is a ball of rock and ice while Io, closest to the planet, is a boiling world of active volcanoes and lava lakes. Europa is perhaps the most interesting moon - its cracked, icy shell is believed to cover an ocean of liquid water which may possibly harbour life.

Famous for its glorious and complex ring system, Saturn is the sixth planet from the Sun and has an equatorial diameter of 120,536 km. It is made primarily of hydrogen, but its upper cloud layers include ammonia and water ices. Saturn rotates in 10 hours 39 minutes and takes about 29.45 years to orbit the Sun. Saturn’s magnificent ring system is made up of billions of pieces of water ice ranging in size tiny icy grains to chunks the size of mountains.

The rings span up to 282,000 km, but are not very deep, being less than a kilometre thick. There are more than 30 rings, each of which is divided into thousands of ringlets.

Like Jupiter, Saturn has complex cloud bands (with a temperature of -139°C) and massive storms, lightning and auroras.

Saturn has 62 known moons, plus innumerable tiny moonlets. Many of the moons play an important part in shaping the structure of the ring system. Saturn’s largest moon, Titan, is the second largest in the solar system. It has a dense atmosphere made of nitrogen and methane and lakes of liquid hydrocarbons on its surface.

Uranus is an unusual world, tipped on its side by an ancient impact. With an equatorial diameter of 50,000 km, Uranus rotates every 17 and a quarter hours (but, like Venus, rotates in a counter-clockwise direction) and takes 84 Earth years to complete its orbit of the Sun.

Uranus has a smoggy atmosphere of hydrogen, helium and methane over an icy interior.

It has the coldest planetary atmosphere in the solar system, with a minimum temperature of -224.2°C. A methane haze covers the upper layers of the atmosphere and hides the clouds and storm activity below.

Because of its unusual axial tilt, during its orbit, one or the other of Uranus’ poles will be pointing directly at the Sun and receive about 42 years of direct sunlight. The rest of the time they are in darkness.

Uranus has 13 known rings, made of much darker particles than the rings of Jupiter and Saturn, perhaps the result of the destruction of an ancient moon by an impact. It also has 27 known moons.

Neptune, the outermost of the major planets, is a little smaller than Uranus (equatorial diameter 49,528km) and similar in composition, but its atmosphere is wracked by fierce winds (measured travelling at 600m per second) and giant storms.

One of these massive storms was the Great Dark Spot, first observed in 1989, which lasted for five more years. Neptune takes 164.8 years to complete an orbit about the Sun, but its day lasts just over 16 hours. Neptune has a thin system of five rings, composed of ice particles and dust grains, and 14 known moons.

Pluto, was once considered a planet, but is now categorised as a dwarf planet. It is included on the Neptune stamp as a representative of the smaller bodies in our Solar System. These include dwarf planets, asteroids, comets and the icy bodies of the Kuiper Belt and the Oort Cloud, at the outer fringes of the solar system.

Dwarf planet Pluto, the largest known object in the Kuiper Belt (2,370km diameter) and has been explored by the New Horizons mission in 2015. Pluto and its large moon Charon have been revealed as two very different icy worlds, with complex and unexpected geology, demonstrating that we still have much to learn about our solar system.