The Megapodiidae is a remarkable family of birds that ranges through South-east Asia to New Guinea, Australia and the Pacific Islands. Commonly called megapodes (literally “large foot”), this family belongs to the order Galliformes, which also includes heavy-bodied ground-feeding birds such as turkeys, chickens, quails and other landfowl.

The main distinguishing feature of megapodes is that unlike other birds, they don’t build nests or incubate their eggs with body heat. Rather, they use their powerful legs and sharp-clawed feet to dig burrows in warm volcanic soil and solar-heated sand or to build large mounds by scraping together soil, sand and vegetation debris. The eggs are then laid into these burrows or mounds and are incubated with heat from decomposing vegetation, the sun or volcanic activity. Of the more than 20 species of megapodes, three are found in Australia, all of which build mounds. These three species are presented in this stamp issue.

The Malleefowl has a fragmented range in semi-arid regions of southern mainland Australia from New South Wales and western Victoria to southern Western Australia. It is about the size of a large domestic chicken, and the grey, cream, black and rufous plumage provides good camouflage within its habitat of mallee and wattle scrubland and woodland.

The diet of the Malleefowl consists mainly of seeds, flowers and buds, with the occasional invertebrate. The species, which is listed nationally as vulnerable and as endangered in New South Wales and Victoria, is particularly vulnerable to habitat destruction and drought arising from climate change, as well as predation from the introduced Red Fox.

The stamp photographs are by Ian Morgan and Sallyanne Cousans.

The Australian Brush-turkey is found in eastern Australia from Far North Queensland to the South Coast of New South Wales and has been introduced to Kangaroo Island, South Australia. With a wingspan of around 85 centimetres and total length of 60 to 75 centimetres, it is the largest of the Australian megapodes. It has a fan-like tail, dark plumage, bare red head and a wattle that is yellow in the more widespread nominate subspecies and light purple in the birds of the subspecies A.l. purpureicollis from northern Cape York Peninsula. The wattles on male birds become larger and brighter during breeding and nesting season between August and February.

The diet of the Brush-turkey consists of insects, seeds and fallen fruit. These birds are not classified as threatened but are a protected species.

The stamp photographs are by Jan Wegener/Aviscapes

Smallest of the Australian megapodes, the Orange-footed Scrubfowl is found in coastal regions of northern Australia, frequenting rainforest, mangroves and monsoon forest. Three of the five subspecies of this bird are found in Australia: M.r. castanonutus, M.r. tumulus and M.r. yorki. The Orange-footed Scrubfowl has a head crest, grey-brown plumage, orange legs and feet and an orange-yellow beak, and like the Australian Brush-turkey, is commonly seen in suburban gardens, where its large mounds and constant foraging can be a nuisance, disturbing young plants and interfering with sprinkler systems.

These birds have a strong pair bond, and both sexes build the huge mound, the largest of the Australian megapodes, which can reach 4.5 metres in height and 15 metres in diameter. Orange-footed Scrubfowls spend much of their time foraging, looking for the berries, fruit, roots, small beetles and insects that constitute their diet. Generally common and widespread, this bird is protected but not classified as threatened.

The stamp photographs are by Sheau Torng Lim and Jan Wegener/Aviscapes.

This set of stamps contains all three stamps from the Megapodes of Australia stamp issue. 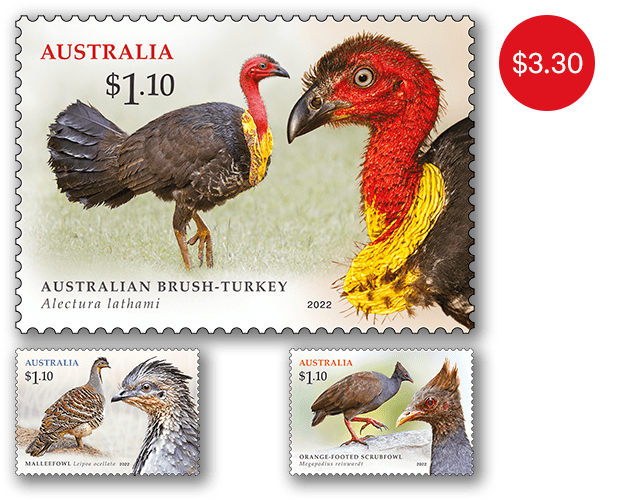 The Megapodes of Australia stamp pack contains all three stamps and minisheet from the stamp issue presented in a high-quality folder. The Megapodes of Australia minisheet consists of the three stamps from the issue incorporated into a miniature stamp sheet. 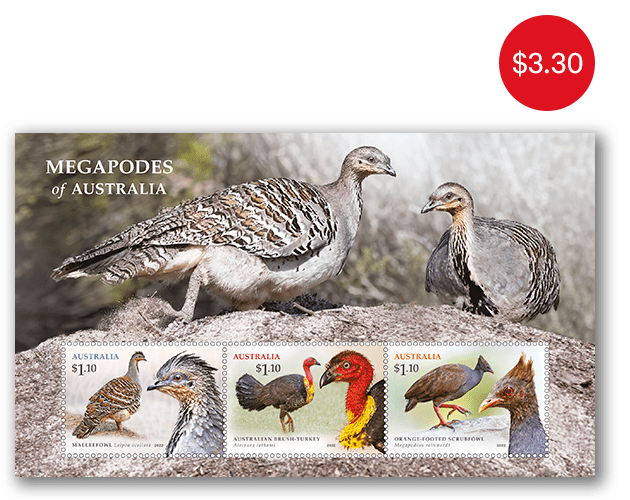 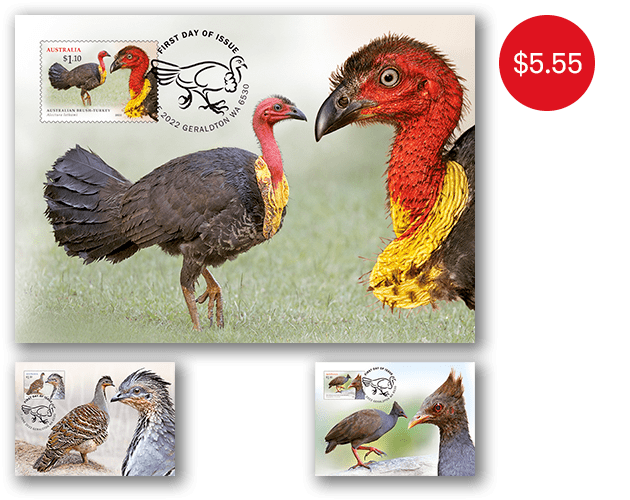