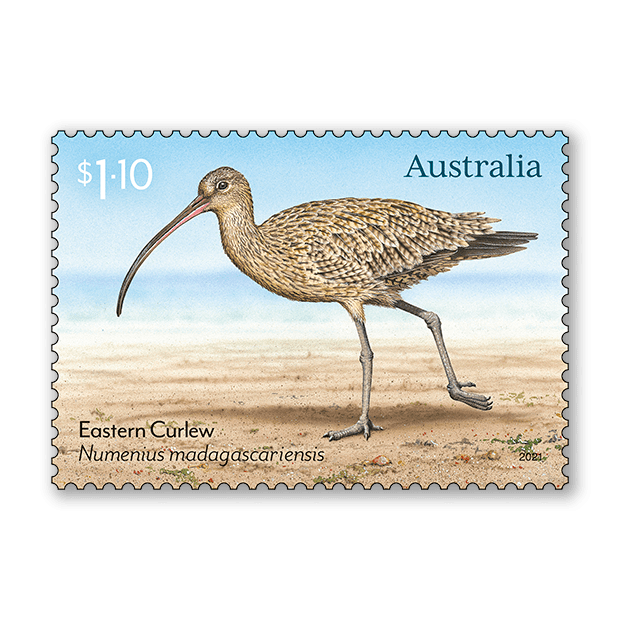 There are nine major waterbird flyways worldwide, and Australia and New Zealand lie at the southern end of the East Asia – Australasia Flyway (EAAF), which as the Arctic Circle at its north. The EAAF passes through 22 countries and is travelled by an estimated 50 million migratory waterbirds, approximately eight million of these being shorebirds, who annually fly the aerial loop of approximately 25,000 kilometres.

Australia has 37 recorded species of migratory shorebirds. These migratory species breed in the northern hemisphere and then migrate to the feeding grounds of Australasia, where they spend their non-breeding season. When shorebirds arrive in Australia, from late August, most use the north-west as a “staging area” before dispersing across the country. Arriving exhausted and often having lost a good half of their body mass, the birds greatly increase their weight before departing Australia in autumn. Shorebirds do not have webbed feet, so they enter water only to feed.

Some migratory shorebird species are known by less than 20 sightings, with seven of these at risk of extinction, with many threats relating to human impacts on the intertidal zone, including development and pollution. Illustrated by wildlife artist Kevin Stead, the stamps depict three species of shorebird that ply the EAAF and that are considered at risk.

This reasonably large wader (37–39 centimetres) has a long, slightly up-curved beak. Its non-breeding plumage is a mottled grey-brown on the upper parts and pale buff to white below, and its name suggests it has a barred upper tail. Soon before leaving Australia, it is sometimes seen in its breeding plumage, with its head, chest and underside developing a deep rufous to chestnut colour, as depicted in the stamp design.

Two subspecies of the Bar-tailed Godwit fly the EAAF: the critically endangered L. l. menzbieri, which migrates through eastern China, the Korean Peninsula and possibly Japan to Roebuck Bay, Western Australia; and the vulnerable L. l. bauera, which migrates to New Zealand and eastern Australia. It breeds in Alaska, Scandinavia and northern Asia and is numerous in coastal areas of northern Australia, especially around Roebuck Bay, but is evident around the country.

This medium-sized wader (26–28 centimetres) has a straight, slender bill of medium length, with which it rapidly jabs at the estuarine mud to feed on molluscs, worms and crustaceans. Its plumage is mid grey-brown across its upper parts, becoming dark grey on its primary and secondary (wing) feathers, and fading to a pale-brown-speckled white on its chest and under parts. Its breeding plumage is darker, with rufous across its scapulars.

The Great Knot breeds in eastern Siberia, and South Korea is a major staging post on its flight south; the destruction of this important stopover has seen Great Knot numbers plummet significantly. Despite being listed as critically endangered, it is often seen in large flocks (sometimes of mixed species). It is most common across northern Australia, though it can be found right around the country’s coast.

The largest shorebird in Australia (60–65 centimetres in length, including its beak), the critically endangered Eastern Curlew has a distinctive long, downward-curved beak, usually longer in females than males and averaging 18.5 centimetres. The timid, long-legged bird is pale buff and finely streaked head, neck and underside move into a dark-brown mottled and streaked back, with a mainly barred dark tail and wing feathers. Its breeding plumage is more rufous.

Breeding Russia and north-eastern China during the northern spring/summer, the Eastern Curlew is widespread in coastal Australia when it arrives for the austral summer, though is most numerous in the north-east and south of the country, including Tasmania. Around 75 per cent of this species flies the EAAF to Australia.

This set of stamps contains all three stamps from the Migratory Shorebirds stamp issue. The Migratory Shorebirds stamp pack contains all three stamps and minisheet from the stamp issue. 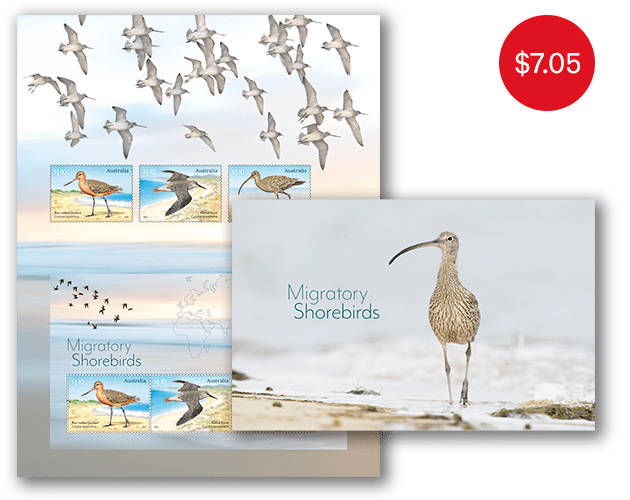 The Migratory Shorebirds minisheet consists of the three stamps from the issue incorporated into a miniature stamp sheet. This maxicard set contains the three maxicards from the Migratory Shorebirds stamp issue. 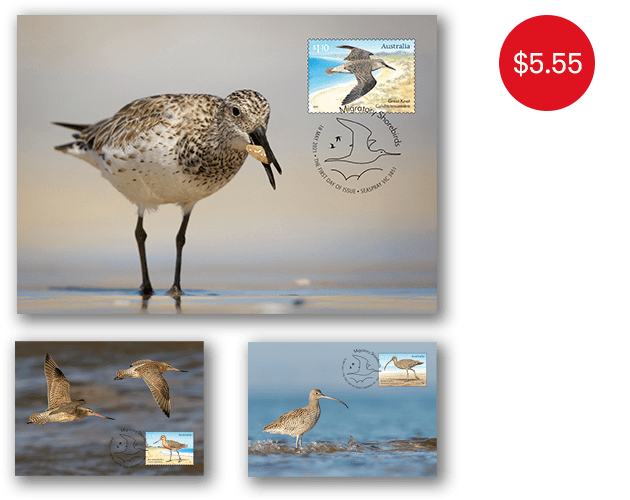