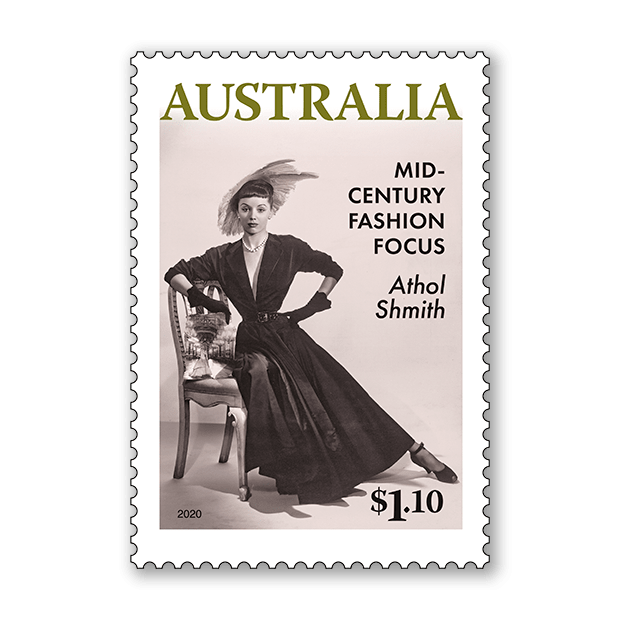 With Australia’s dramatic economic, urban, technological and social development, post-World War II, photography was well placed to serve the newly prosperous and aspirational nation. It was a visual medium that lent itself to advertisements, promotions, catalogues, newspapers, magazines and other print media, and it was also used to document new major projects, such as the Snowy River Hydro and Shell Oil Refinery, as well as various architectural projects.

Melbourne was at the heart of Australian fashion during the mid-20th century. Athol Shmith, Helmut Newton, Henry Talbot and Bruno Benini, names synonymous with fashion photography during this period, all had studios in the Victorian capital, with Newton and Talbot in business together for five years.

The stamps showcase not only the work of these four leading fashion photographers, but they also illustrate fashion and stylistic shifts occurring over successive decades, from the late 1940s to the 1970s. The stamp designs return the photographs to their original commercial context, referencing fashion illustration through evoking magazine cover art. The photographs are from the collections of the National Gallery of Victoria. This stamp issue also recognises the birth centenary of Newton and Talbot.

Born in St Kilda, Louis “Athol” Shmith (1914–90) was the son of British immigrants. From being a music-loving youth, he rose to became one of Australia’s leading portrait, fashion and commercial photographers from the 1930s.

The photograph featured on the stamp was taken in 1948 and shows Patricia Tuckwell, who Shmith later married, modelling a wasp-waisted Dior frock. Representing the earliest of the four decades shown, this studio shot exudes the precisely constructed glamour style for which Shmith was known.

Helmut Neustaedter (1920–2004) arrived in Australia in 1940, leaving his native Germany as the Nazis Nuremburg laws came to dominate. At war’s end, he became a British subject and Anglicised his surname to Newton.

Helmut Newton established a photography studio in Flinders Lane in 1946, working mainly with industrial and theatre subjects in the earlier years and then fashion from the early 1950s. He left for London in in the mid-1950s, working throughout Europe and gaining an international reputation for his edgy photographic style.

The stamp photograph was taken in 1959 for the Australian Wool Board and Vogue Australia. Shot on Melbourne’s Queen Street, it features Australian model Janice Wakely (herself a photographer).

Born Heinz Tichauer (1920–99) to German Jewish parents and having studied graphic art in Berlin, Henry Talbot arrived in Australia in 1942 via England. He worked for the Australian Army on the home front from 1942 to 1946, which is where he met fellow émigré photographer Helmut Newton.

Following a passion for commercial photography, Talbot established a photography studio with Newton in central Melbourne in 1956, working almost exclusively in fashion and advertising, bringing a fresh European sensibility to their work. A year or so later Newton left for England, leaving Talbot to run the business, which he did until Newton ended the informal partnership in 1961.

The stamp photograph is of model Maggie Tabberer, taken in the 1960s.

Bruno Benini (1925–2001) arrived in Melbourne from Italy with his family in 1935. Benini’s career as a photographer, capturing both Australian and international fashion labels, stretched over five decades from the 1950s, most significantly from the 1950s to 1970s.

Benini’s career began at the Peter Fox studio with Henry Talbot, first as a receptionist and a salesperson, and then becoming Talbot’s assistant. He set up his first studio in Kew in the mid-1950s, before moving to the city. His photographic style has been described as expressive and romantic. His shoots were not only located in Australia, but internationally, including in his native Italy, and he shot mostly in black and white.

This set of stamps contains all four stamps from the Mid-Century Fashion Focus stamp issue. The Mid-Century Fashion Focus minisheet consists of the four stamps from the issue incorporated into a miniature stamp sheet. 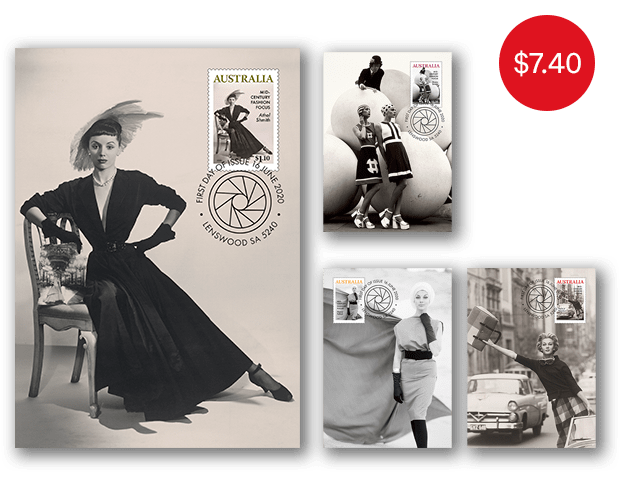