Thousands of organisms – animal and plant, though most numerously in the insect world – employ modes of deception to extend their existence; they prolong their lives through protective and/or predatory disguises that increase their defences, their access to food and the likelihood of their successful reproduction. Part of the process of natural selection, the evolution of mimetic mechanisms confers advantage to a mimetic species in the ongoing battle for survival.

Mimicry is a diverse and complex set of adaptations that can be visual, perceptual and behavioural (including scent release and vocal performance). The key players in the dynamic of mimetic relationships are the “mimic”, the “model” and the “dupe”, or “receiver”, with the intent of the mimic being to alter the behaviour of the receiver through communication of signals. Most usually there is a winner and loser in the relationship, but mimicry can also be mutually beneficial to the mimic and model. For example, one species may adapt to resemble another for defensive purposes, and this, statistically, reduces the likelihood of both species being predated by a common enemy.

The stamps, illustrated by Anita Xhafer, show animals from three groups – a bird, a fish and an insect – that have evolved to use visual mimicry for protective purposes. The illustrations reveal the animal while simultaneously indicating its capacity for camouflage. The minisheet shows the Superb Lyrebird (Menura novaehollandiae), Australia’s stellar vocal mimic, able to replicate both natural and human-made sounds.

The Leafy Seadragon (Phycodurus eques), also known as Glauert’s Seadragon, inhabits temperate waters along Australia’s southern coastline, mainly from South Australia to Western Australia. It is not commonly observed due to the yellowish-brown leaf-like appendages covering its body, which provide excellent camouflage in seagrass meadows, seaweed and kelp-covered rocky environments. The appendages gently move with the current to give the seadragon an ethereal appearance. Two small pectoral fins and a single caudal fin provide propulsion, which is slow and rhythmic, accentuating the camouflage effect in mimicking the movement of seaweed. The Leafy Seadragon is also able to change its colour to correspond with its habitat.

The Tawny Frogmouth (Podargus strigoides) is a nocturnal bird, of which there are three subspecies occurring in Australia’s south-east (strigoides), central and west (brachypterus) and north (phalaenoides), the latter being noticeably smaller than the former two. Its length ranges between 34 and 53 centimetres. The mottled patterning of the Tawny Frogmouth’s plumage aids camouflage, in giving the effect of bark and lichen of weathered trees, and its preferred habitat is eucalypt woodland.

During daylight hours, the Tawny Frogmouth will sit motionless on a tree branch, mimicking, through its elongated shape and bristled brow, a jagged broken branch. In this defensive posture, the bird will open its eyes just a slit (so as not to attract attention), its head imperceptibly following the movement of any intruder.

The endemic Macleay’s Spectre (Extatosoma tiaratum), also known as the Spiny Leaf Insect and the Giant Prickly Stick Insect is mainly distributed in rainforests in Queensland and New South Wales. While it mimics its habitat to camouflage itself, it will also sway, as if it is a leaf caught by the breeze, and curl its tail as if aping a scorpion when it is threatened. Some, like the individual shown on the stamp, also mimic lichen if this is particular to its environment. Because these insects are herbivorous, they use camouflage only for defensive purposes.

Macleay’s Spectre has an amazing life cycle, which is also defined by mimicry: it drops its eggs onto the ground, so that red-headed black ants, attracted by a knob on the egg, take them to their nest where they eat the knob, leaving the eggs to hatch (thus avoiding predators). The nymphs then smell and behave like red-headed black ants prior to emerging from the ground; before being sprung by the ants, the nymphs ascend the trees.

This set of stamps contains all three stamps from the Nature's Mimics stamp issue. 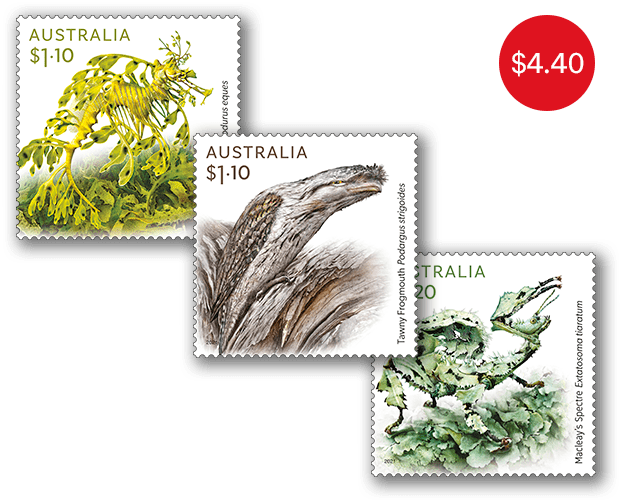 The Nature's Mimics stamp pack contains all three stamps and minisheet from the stamp issue presented in high quality folder. The Nature's Mimics minisheet consists of the three stamps from the issue incorporated into a miniature stamp sheet. 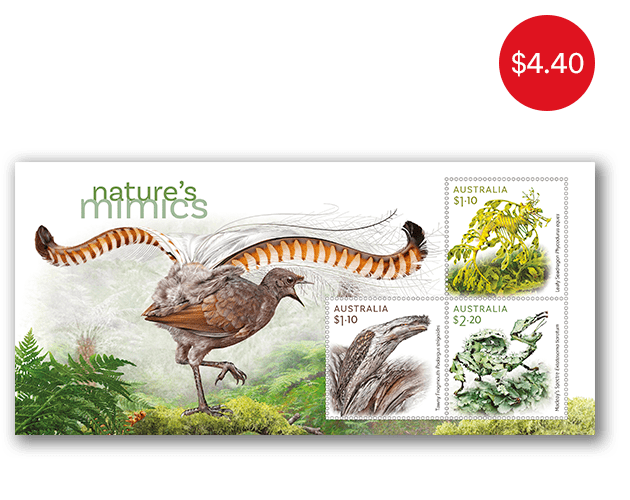 This maxicard set contains the three maxicards from the Nature's Mimics stamp issue.