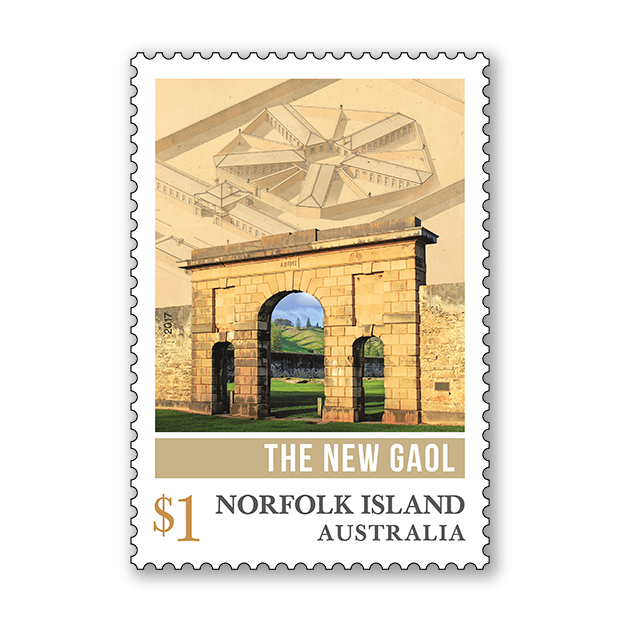 This stamp issue presents two historic sites from the second penal colony established on Norfolk Island between 1825 and 1855: the New Gaol, completed in 1847, and the Prisoners Barracks, completed in 1835. Both structures were quarried for buildings materials when the Pitcairn Islanders arrived as settlers, in 1856. So while only the arched entrance and perimeter walls of these sites remain standing, both symbolise the unforgiving conditions experienced by convicts sent to Norfolk Island.

The sites are part of a large collection of penal settlement buildings, ruins and archeological remains that comprise the Kingston and Arthurs Vale Historic Area (KAVHA), which sits on the southern side of Norfolk Island, on the Kingston coastal plain. KAVHA is part of the Australian Convict Sites World Heritage Property, which comprises 11 sites that tell evocative stories about Australia’s convict past.

Learn more about KAVHA and its history

Prisoners on Norfolk Island worked in gangs on building sites or agricultural areas. The New Gaol was a form of secondary punishment for recalcitrant convicts. Inmates were required to perform more strenuous tasks. The jail was a rare example of pentagonal design, similar in design to a series of pentagonal jails that were constructed around the world during the 19th century. It was built as a replacement for the original jail which, due to its position closer to the foreshore and as evidenced by the flood of 1834, was a flood risk.

The photograph in the stamp design is by Steve Daggar. In the background of the stamp is an original drawing from a series of plans of the New Gaol, housed in the Tasmanian Archives and Heritage Office.

The Prisoners Barracks was designed by William Buchanan, a civil engineer and surveyor on the island. It housed close to 980 men and boys in cramped conditions, with between 20 to 120 people housed within a single ward. A third story was added to the building in the late 1830s. Its arched entrance is colloquially known as Gallows Gate, although there is no historical evidence that the hanging of prisoners took place at that location. The photograph in the stamp design is by Robin Nisbet.

The watercolour painting in the background of this stamp (and the minisheet) shows the three-story barracks positioned behind the pentagonal-shaped New Gaol. The painting, by Thomas Seller, is held in the National Library of Australia. Seller was the foreman of works in the Royal Engineer Department on Norfolk Island during the second penal settlement, staying on the island until 1847. It is thought that time of the painting (listed as circa 1835, but more likely 1838 or even 1839) the jail itself was planned but not built, hence its flat, sketch-like appearance.