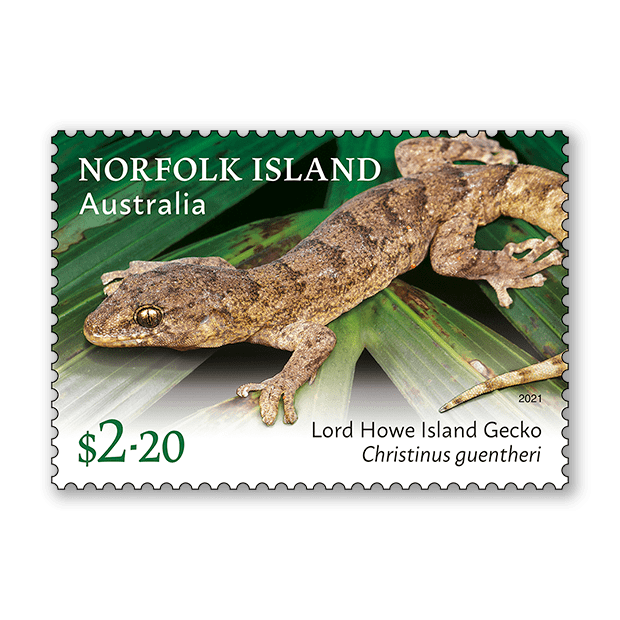 Norfolk Island lies around 1,600 kilometres north-east of Sydney, in the South Pacific Ocean. Besides the main island, home to a population of nearly 2,000, the Norfolk group comprises the uninhabited Phillip and Nepean Islands, as well as numerous small rocky islets.

This remote oceanic territory is home to two native species of land reptile, both of which are also evident on Lord Howe Island, where they were first described in the late 19th century. They are the Lord Howe Island Skink (Oligosoma lichenigera) and Lord Howe Island Gecko (Christinus guentheri), which are listed as vulnerable in state and federal legislation and are on the International Union for the Conservation of Nature (IUCN) Red List. Neither species inhabits the Norfolk’s main island, probably due to the presence of Polynesian and Black Rats, but both are found on Phillip Island; the gecko has also been observed on Nepean Island and the rocky islets of Moo’oo Stone, Green Pool Stone and Bird Rock. The main threats to both species are rats, cats and the introduced Asian House Gecko.

Described on Lord Howe Island in 1874 but first recorded in the Norfolk group in 1978, the Lord Howe Island Skink grows to around eight centimetres in length and is rich metallic bronze to olive in colour, with small brown flecks along its body. It often has brown spots on its head, a pale golden stripe from above its eyes to the base of the tail. This nocturnal skink occurs in various habitats, from bare cliffs to coastal dunes to dense vegetation and root mats, where it can forage and take shelter. The stamp photograph is by David Fischer.

First described on Lord Howe Island in 1885, the pale olive-grey to dark-brown-coloured Lord Howe Island Gecko is heavily built and medium-sized, growing to around eight centimetres in length. This smooth-scaled reptile and is peppered with darker spots and a series of W-shaped markings that fade towards its flanks. This nocturnal gecko occurs in closed forest, low open woodland, tussock grassland and rocky islets, and seems to prefer protected rocky areas. The stamp photograph is by Henry Cook.

This set of stamps contains the two stamps from the Norfolk Island: Lizards stamp issue. The Norfolk Island: Lizards minisheet consists of the two stamps from the issue incorporated into a miniature stamp sheet.