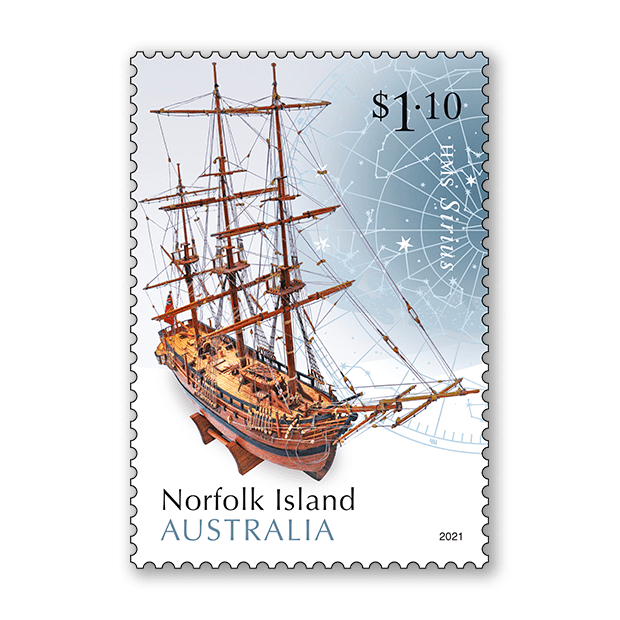 Archaeological material indicates that Norfolk Island was settled first by Polynesians between the 13th and 15th centuries. These seafaring people had long abandoned the island by the time the British first established a settlement there in March 1788, with a handful of convicts and free settlers arriving on HMAT Supply, the smallest of the 11 ships of the First Fleet. The convict settlement grew but was abandoned in 1814, due to the island’s isolation and difficult landing options, with remaining convicts transported to Van Diemen’s Land.

A second British settlement occurred between 1825 and 1855, and this was a notoriously brutal phase of convict incarceration. Norfolk’s third phase of settlement commenced the following year, when descendants of HMS Bounty mutineers and their Tahitian families, numbering 194 individuals, were resettled from Pitcairn Island, more than 6,000 kilometres east across the Pacific. Descendants of these Pitcairn Islanders now make up around half of the island’s population.

This history of settlement is preserved through the collection of the Norfolk Island Museum. The collection is displayed across four historical buildings, each of which is part of the Kingston and Arthur’s Vale Heritage Area (KAVHA). The museum has three key collection areas: HMS Sirius, comprising approximately 3,000 items that have been recovered from the wreck of this ship; KAVHA, with around 14,000 mainly convict-related artefacts from the area; and Norfolk Island Museum Trust, which is a diverse collection comprising items brought by the Pitcairn Islanders to Norfolk Island in 1856, along with material assembled since. This stamp issue depicts two timber model ships held in the museum collection.

Launched in 1780 as the Berwick for East India trade, the 110-foot (35.5 metre) teak-hulled HMS Sirius became the flagship of the First Fleet, establishing British settlement of Australia in 1788. Captained by John Hunter, she was selected as the flagship due to her generous storage capacity, essential for carrying provisions and personnel to the new colony; she remained in New South Wales as a supply ship. Two years later, in 1790, having brought provisions to the ravaged Port Jackson settlement from Cape Town, HMS Sirius and HMAT Supply set sail to Norfolk Island on 6 March, with marines, convicts and stores.

Convicts and marines were dropped at Norfolk’s Cascade Bay on 13 March, the strong southerlies and high surf making Sydney Bay (Kingston), home of the main settlement, a dangerous proposition. Six days later the Sirius entered Sydney Bay, from where boats could transfer stores to the shore. But the storm worsened and the wind changed direction, causing the Sirius to drift too far into the bay and become wrecked on the reef on 19 March 1790. No lives and few stores were sacrificed to the sea, but the loss of the defence and supply ship was a disaster for the precarious New South Wales colony. The crew was stranded on Norfolk Island for 11 months, before being returned to Port Jackson.

Built in 1759, the 70-foot brig-rigged sloop HMAT Supply carried naval supplies in Britain for more than two decades before joining the First Fleet, which set sail in 1787 to establish a convict colony in Australia. Once the settlement at Port Jackson was established in January 1788, the Supply carried the first British settlers – free settlers and convicts – to Norfolk Island, which would be established under the control of Lieutenant Philip Gidley King.

Captained by Henry Lidgbird Ball, the Supply became a link to the colony on Norfolk Island, making a total of 10 voyages during her antipodean career. Soon after the Sirius was wrecked off Norfolk in 1790, the Supply was sent to Batavia to obtain much-needed supplies for the colony at Port Jackson; there, Ball chartered a second ship to bring provisions to the desperate colony. The Supply collected the marooned crew on Norfolk Island in early 1791. 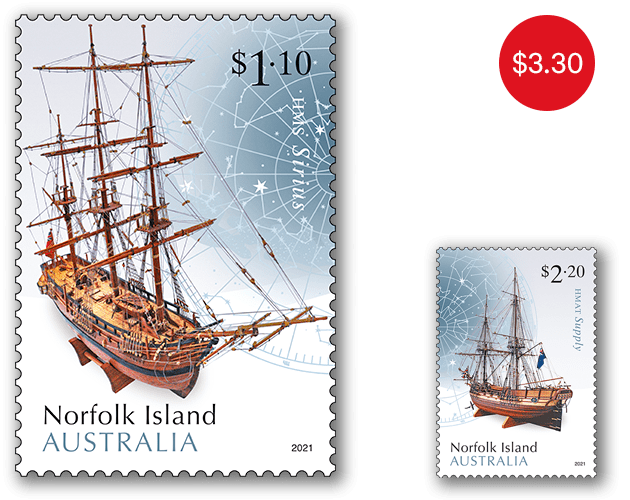 The Norfolk Island: Museum: Maritime Models minisheet consists of the two stamps from the issue incorporated into a miniature stamp sheet. 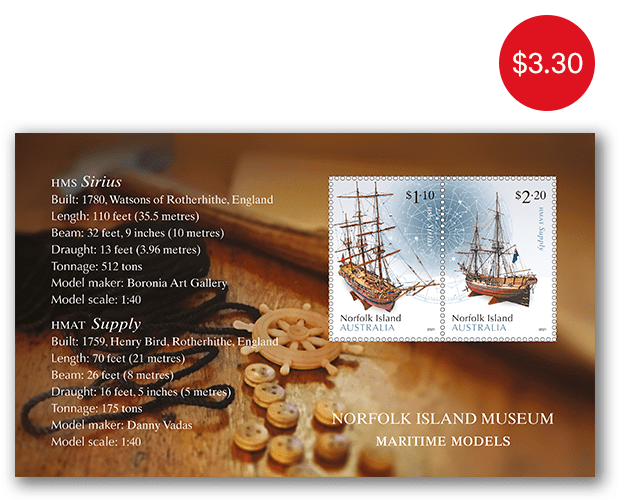 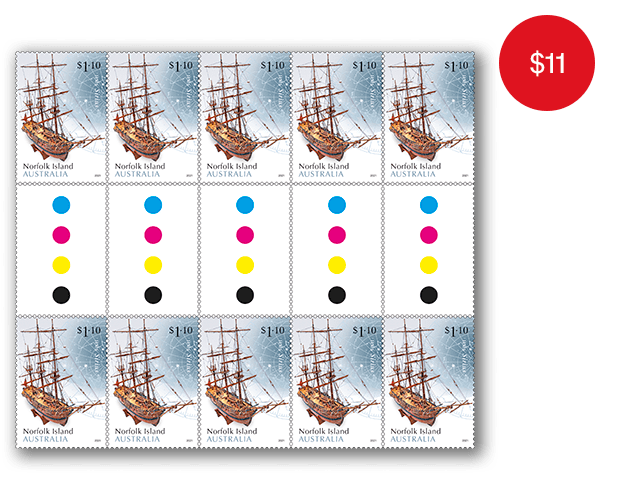 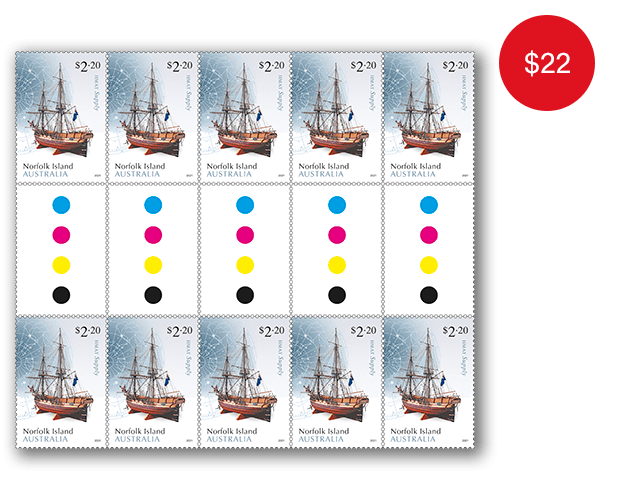