This stamp issue centres on the story behind the third British settlement on Norfolk Island, which was established on 8 June 1856, when the entire population of Pitcairn Island (193 people, plus one birth at sea) concluded a harsh 33-day voyage, aboard the Morayshire, to their new home.

The population, which included descendants from the infamous mutineers of HMS Bounty, had outgrown Pitcairn. Discussions about a relocation had been going on for some time, and in 1831 there was a short-lived and disastrous relocation to the inhabited island of Tahiti, which resulted in the loss of 20 per cent of the Pitcairn population through disease. Official permission to relocate to Norfolk Island was forwarded by the British Consul in 1854. In 1858, the head of each family was granted a 50-acre allotment of land by Her Majesty’s Government.

Learn more about this fascinating story in From Pitcairn to Norfolk through stamps.

The stamps, designed by Jo Muré of the Australia Post Design Studio, feature engravings of community leader George Hunn Nobbs (1799–1884) and Queen Victoria (1819–1901). The two are facing each other, as though in conversation. In the background is an illustration of Norfolk Island froman 1850s map. The minisheet design features the original Plan of Allotments, including the surname of each Pitcairn family that received an allocation of land.

George Hunn Nobbs was a schoolteacher, pastor and community leader. Born in Ireland, Nobbs landed in Pitcairn Island in 1828, via Peru. In 1829, Nobbs married Sarah Christian, grand-daughter of Fletcher Christian, the infamous leader of the Bounty mutiny who had fled to Pitcairn to escape capture. Despite a brief departure from Pitcairn during the despotic rule of Joshua Hill, Nobbs returned and became the spiritual leader of the community (albeit there was an appointed magistrate on the island). Nobbs did much to ensure that the population of Pitcairn secure a suitable new home and to keep the population together following their arrival on Norfolk Island. In 1852, George Hunn Nobbs, after impressing a visiting British Rear Admiral, was invited to travel to England. There, he was ordained as a Church of England minister and granted an audience with Her Majesty Queen Victoria, where he discussed the plight of the Pitcairn Islanders. When official permission was granted by the British government for the population to relocate to Norfolk Island, Nobbs referred to this as “Her Majesty’s most gracious offer”.

This set of stamps contain the two stamps from the Norfolk Island Pitcairn Settlement stamp issue. The Norfolk Island Pitcairn Settlement minisheet consists of the two stamps from the issue incorporated into a miniature stamp sheet. 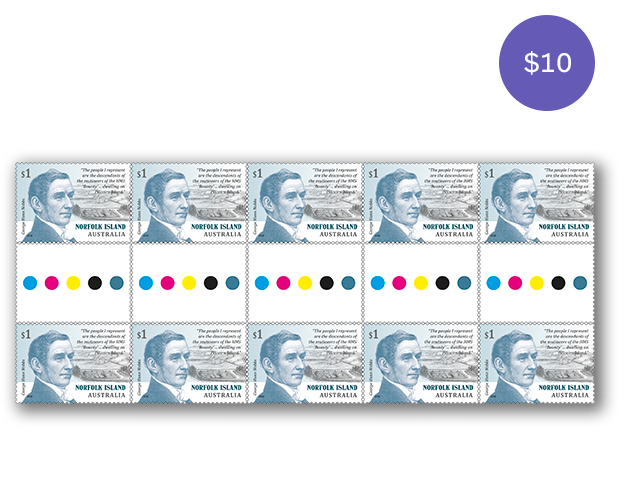