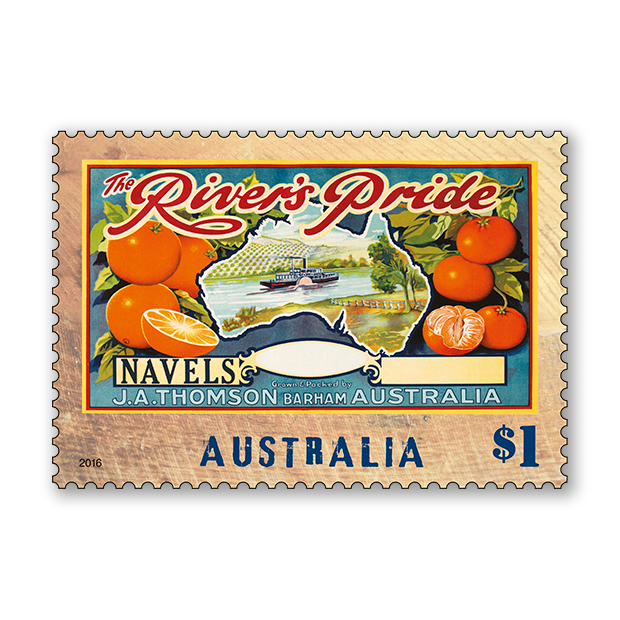 At the beginning of the 20th century, Australia’s primary production industries expanded at a great rate, which in turn led Australia to become a major exporter of food, including fresh fruit.

From the 1920s until the 1970s, colourful paper labels were pasted onto the ends of wooden fruit cases, as a means of identifying and promoting their contents as well as the growers, shippers and exporters of the era. The brightest designs were usually reserved for Australia’s expanding fruit export industry, especially fruit bound for Britain and Europe. Australian fruit labels presented an idealised and stylised view of Australia and were heavily influenced by their American counterparts. While fruit labels were produced for pears, grapes, citrus and more, the dominant fruit in labelling terms was apples, and the dominant apple-growing state was Tasmania, which became aptly known as the “apple isle”.

The end of the labels era coincided with an industry downturn (including some problems with the consistency and quality of fruit), the end of preferential access to the British market (when they joined the European Community in 1973) and the adoption of the cardboard carton. However, fruit labels are still a widely collected form of ephemera, admired for their retro nostalgia, and some fruit packing houses still choose affix them to their cartons for a better ‘finish’.

The stamp issue, designed by Jo Muré of the Australia Post Design Studio, features three labels from the Troedel Printing Archive, in the State Library Victoria. The sample books of well-known printing firm Troedel and Cooper are packed with colourful fruit labels and form one of the largest (if not the largest) public collection of labels in Australia. The fourth label is from Western Australia, another important apple-growing region, which produced some particularly colourful labels, often featuring wildflowers (for which the region is well known). The labels were also been selected to represent a range of fruits and fruit-growing regions and have been placed on a wooden background, in reference to the wooden boxes onto which the labels were placed.

The Kile family was one of many pioneering orchardist families of the Huon district in Tasmania, which includes areas such as Franklin, Huonville, Woodbridge and Cygnet. LH Kile’s “Robin brand” label originated prior to World War II, when many apple growers still picked, packed and graded their own fruit under thousands of individual brands. A fifth generation of the Kile family is still growing fruit in the area.

“426” would have been the importer’s shipping number. “Robin” was most likely selected as the brand name, because of the prevalence of Flame Robins in the area and because L H Kile had a keen interest in nature.

The River’s Pride orange label features the town of Barham, on the Murray River, which along with neighbouring Koondrook, still grows, packs and exports citrus. In fact, the whole Murray Valley is still a key citrus region, with citrus industries stretching from the border of Victoria and South Australia through Sunraysia, Mid Murray towns, such as Swan Hill and Barham, to the area surrounding Wangaratta.

The label features a paddle steamer on the mighty Murray River, which has been heavily idealised to include orange groves on the banks of the river.

WH Price Pty Ltd was a prominent Australian exporting firm of the era, using bright blue labels for apples, pears, grapes, citrus and more. Representatives of the firm were often quoted in newspapers in the 1930s, discussing key industry issues as well as evidence given to the Fruit Industry Commissioner on how the industry needed to improve.

Ohanez grapes are still grown in Australia today, and table grapes are still a major Australian horticultural industry. There are approximately 1,000 growers across Australia, with major growing regions including Sunraysia in Victoria and throughout southeast Queensland, and approximately 65% of table grapes are exported around the world. They are a medium to large, yellow-green grapes, available from late March to early May.

Paterson & Co. was one of the largest shippers of apples and pears in Western Australia during the labels era. The P&Co. brand was registered between 1934 and 1962. The west adopted particularly colourful labels, in part because stencilling didn’t show up well against the red grain of the native Jarrah and Karri hardwoods typically used for their apple cases. Western Australia were the second-largest apple growing region during the labels era, and their apples actually often commanded higher prices than Tasmania’s.

The label has “Rome B” stamped on it, a type of apple (Rome Beauty) which is no longer grown in Australia.

You can read more on the art of apple branding in our article with Christopher Cowles and David Walker.