The stamps in this year’s annual Queen’s birthday stamp issue show Her Majesty at two recent public events: during a trip to West Sussex in late 2017 and during a Royal Air Force (RAF) centenary flypast in July 2018. In both stamp photographs she is wearing a diamond brooch known as the Jardine Star brooch. Given to Her Majesty in 1981, this late Victorian brooch takes its name from Lady Jardine, who bequeathed it to her.

The eight rays of the star are each separated by a single collet diamond, and the large central stone is surrounded by smaller diamonds. Although in recent years the Queen has worn this brooch on several occasions, suggesting great affection for it, little information is known about this piece, including with regards to Lady Jardine (there have been more than one such named baronetess). Nor are the identities of the designer and maker of the brooch known.

The Queen watches the RAF flypast, with members of the royal family, from the balcony of Buckingham Palace on 10 July 2018. The flypast, which comprised close to 100 aircraft associated with the RAF over its history, was one of several events staged to mark the centenary of the RAF. The photograph is by Chris Jackson, via Getty Images.

Set of The Queen's Birthday 2019 stamps:

Set of The Queen's Birthday 2019 stamps

This set of stamps contains the two stamps from The Queen's Birthday 2019 stamp issue. 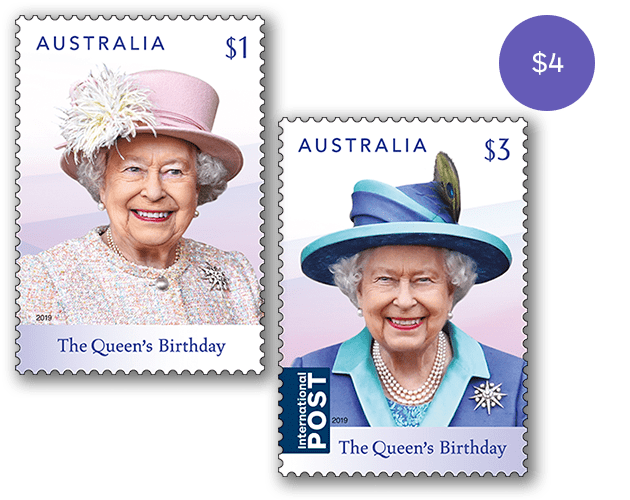 The Queen's Birthday 2019 stamp pack contains the two stamps and minisheet from the stamp issue presented in high quality folder. The Queen's Birthday 2019 minisheet consists of the two stamps from the issue incorporated into a miniature stamp sheet. This maxicard set contains the two maxicards from The Queen's Birthday 2019 stamp issue.