This year, 2022, marks the Platinum Jubilee of Her Majesty Queen Elizabeth II. Princess Elizabeth became Queen at age 25, upon the death of her father, George VI, on 6 February 1952. Born on 21 April 1926, this year also marks the Queen’s 96th birthday.

This incredible achievement is the ultimate example of the Queen’s steadfast dedication to service and duty. After reaching the milestone of 70 years on the throne, the Queen remains the longest-reigning living monarch and becomes the only monarch of Britain and the Commonwealth who has ruled for seven decades. There have been 14 British prime ministers in office during her reign and more than 170 Commonwealth leaders.

There will be many celebrations across the United Kingdom to mark the jubilee, including a four-day long weekend of events in June. In Australia, official events will be held in Canberra, including the lighting of the Queen’s Platinum Jubilee Beacon and a ceremony to mark the renaming of Aspen Island, in Canberra’s Lake Burley Griffin, as Queen Elizabeth II Island and to dedicate the new Queen Elizabeth Water Gardens. On Sunday 6 February, iconic Australian buildings were illuminated in “royal purple”, including the Sydney Opera House and the Arts Centre, Melbourne.

The stamp designs for this issue emphasise the colour platinum and include a graphic rendition of St Edward’s Crown, which forms part of the Queen’s cypher. The inclusion of photographic portraits from 1952 and from the present day emphasises the longevity of Her Majesty’s reign.

The domestic-rate stamp features a photograph by Dorothy Wilding (1893–1976), taken on 15 April 1952. It was hand painted by Wilding’s retoucher and colourist, Beatrice Johnson (1906–2000) and forms part of the collections of the National Portrait Gallery, London. Wilding was the first woman to be appointed as official royal photographer.

The photograph was taken as part of a series of 59 portraits, which commenced on 26 February 1952, just weeks into the Queen’s reign. One purpose of the photo shoot was to assist with creating the likeness of Her Majesty on new coins, banknotes and stamps, including in Australia. For the shoot, the Queen wore several gowns designed by Norman Hartnell (who also designed the Queen’s wedding gown). Her jewellery included the Diamond Diadem (also known as the George IV Diadem), which was commissioned for George IV’s coronation in 1821.

The international-rate stamp features a photograph of the Queen attending an event to mark the centenary of British Airways, in 2019. The photograph is by Max Mumby, Indigo/Getty Images.

This set of stamps contains the two stamps from The Queen’s Platinum Jubilee 2022 stamp issue. The Queen’s Platinum Jubilee 2022 stamp pack contains the two stamps and minisheet from the stamp issue presented in a high-quality folder. 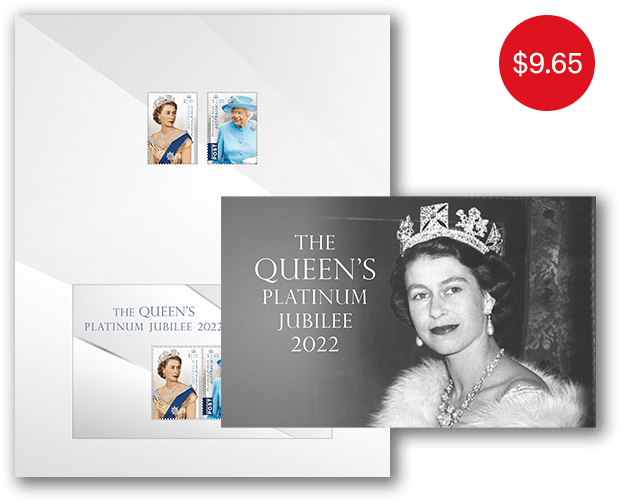 The Queen’s Platinum Jubilee 2022 minisheet consists of the two stamps from the issue incorporated into a miniature stamp sheet.